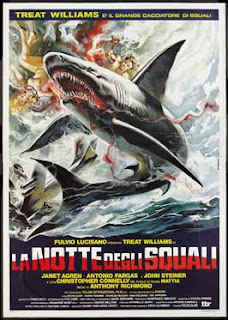 People often ask (and even moreso on the internet), "Why did that actor make that movie?" "Why did this actor stop being good?" "Why doesn't that actor seem to give a shit anymore?" What people fail to realize though, is that actors, like everyone else in this world, need to make money to survive. Believe it or not, actors still need to pay for things, they still need to eat, they still need to have health insurance, and all the pedantic bills you and I bemoan on a monthly basis. I grant you, actors (the bigtime superstars, not necessarily character actors and the like) are paying for these things on a different level from you and I. I doubt Robert De Niro eats much Ramen Noodles in the course of a week. I'm not sure, but I'd wager a guess that Al Pacino doesn't drive around in a 1989 Coupe Deville (well, okay, maybe he does, but still…). The point is, they have to turn a buck, and they do that by selling their talents. And since few producers and studios in Hollywood strive to make meaningful films with strong characterization and parts that talented actors would kill to play (yeah some do, but this isn't an argument we're having here), working actors are forced to act in a lot of shit (particularly as they grow older). These movies can often diminish an actor's standing in many people's minds, but I tend to think that usually we simply don't see the forest for the trees. In other words, you don't know Dustin Hoffman's pain.

David Ziegler (Treat Williams) has forsaken society and now lives a beach bum's life in Cancun, along with pal Paco (Antonio Fargas), and sort-of-girlfriend Juanita (Nina Soldano). Everything is going along just ducky, until perpetual screwup and brother of David, James (Carlo Mucari) decides to blackmail his criminal employer Rosentski (John Steiner) and needs some help from his (I assume) big brother. So naturally, things are going to go bad.

Why I'm covering another Tonino Ricci (aka Anthony Richmond) film is beyond me, especially after the apocalypse-heralding garbage that is Thor The Conqueror, but here I am. In all fairness though, it really wouldn't be right to dismiss the man's entire filmography based on one movie, particularly after penning the introduction above. While The Night Of The Sharks (aka La Notte Degli Squali, aka Jaws Attack) is not nearly as appalling as the aforementioned sword and sorcery lump, it's also not particularly well-made, coherent, engaging, or all that exciting. Regardless, let's press on.

Fargas, much more than Williams, stands out in the film, playing what is essentially a trickster character. Like Br'er Rabbit, the Coyote, and so on, ad infinitum, Paco loves to bedevil other characters for his own amusement. He produces a pack of rubbers to embarrass Juanita. He cheats at a bet involving sticking his hand in a shark's mouth (but in fairness, the people he was betting against were also poised to cheat). He even carries a double-bladed, handmade razor device, which never really pays off beyond one trivial usage, but does signify that Paco has two sides, both of them sharp but also reliable. Paco will stand by David towards the end, because of everyone, David is the only person that Paco trusts. Oh, he'll still try and cheat and irritate him, but the two have a connection, and Fargas does a solid job at playing both ends. That the filmmakers squander this talent is a shame.

Filmmakers have always taken liberties with the laws of physics and nature in their work, and we the audience have always forgiven them up to a point, so long as the violations are either motivated or fairly unobtrusive. This is why we accept the rumble of engines on a spaceship, even though we are told, "In space, no one can hear you scream," or the sound of a planet exploding, or that a radioactive spider's bite would induce superpowers rather than cancer. But this film goes the opposite direction. Ever since Joseph Sargent made a great white shark leap out of the water and shriek at the end of the baffling Jaws: The Revenge, it was only a matter of time before someone in Italy latched onto this idea as if it were truth and "borrowed" it for their own movie. Consequently, we get the one-eyed shark Cyclops, who appears to always be nearby whenever David goes anywhere near the water, rams his boat like it's a grudge match, and roars like he's about to be run through by Lorraine Gary. If Cyclops were a wild boar, it would be one thing, but to put a vocalizing shark in a movie which presents itself as being quasi-realistic is like putting dancing snakes in a horror movie (see Snake Island for further research).

David's grudge with Cyclops is interesting in that it does provide a type of metaphor for his character arc and his struggles. It's alluded to that he is a dangerous man, and that there is very little that he hasn't done, so we assume that he decided to take up the easy life in Cancun to put all that behind him. Yet Cyclops is ever-present in the water, a symbol for predation, revenge (did David take out its left eye?), and violence. Discounting the ridiculousness of a shark holding a grudge (ahem), violence perpetually looms over David's life and the lives of those who he allows/allowed into his life. However, this subplot is never sufficiently tied in to the rest of the film to give it any resonance as anything other than a time killer of sorts and a convenient plot device (and it's alarming how many people are menaced by sharks rather than by the human villains in a film which is not really about shark attacks, but stock footage of sharks is cheap, I suppose). And here is where we come to the movie's biggest problem.

As with Thor…, the movie is hampered by a heavy pall of arbitrariness. The scenes go through their paces, there is an end to be seen, but there's nothing really tying it all together. It's like going down a laundry list, checking off the requirements, and then finishing up for the day. The scenes with Cyclops have him change size, direction, and even makes his eye scar appear and disappear. The viewer is actually tricked (not intentionally by all appearances) into thinking that David has killed Cyclops offscreen at one point, when no such action has occurred. Steiner plays the villain as someone who doesn't want any real trouble if he can deal his way out of it, which is interesting, but it also robs he and his lackeys of any menace, since he's never motivated to escalate matters, and the filmmakers don't seem to care one way or the other. And since they don't care, neither did I.

MVT: The locale is nice for what we see of it, but Williams gets the MVT for being mildly charming despite the entirety of the movie trying to prevent him from doing so. Fargas runs a close second, but he has the juicier part, so his work was a little more cut-and-dry, I think.

Make Or Break: More a missing scene than anything, the Break is the cut between David chumming the water for Cyclops to him on a dock with a dead shark (I would swear it even has a wound where its left eye should be), which is not Cyclops at all, but we're never given any clue about this state of affairs, so it's somewhat baffling when the halfsighted fish makes a random kill later.