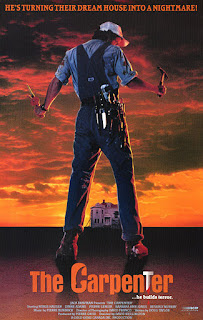 I’ll give David Wellington credit. He takes a simple plot, that of a psychotic carpenter haunting his unfinished dream home, and tries to do something more with it. He takes the slasher mold and tries to craft a psychological thriller out of it. I say tries because he’s not quite successful. It should be noted he’s working off a script by Doug Taylor, though I’m not sure if that was written as a traditional slasher. There are moments in the film that play out as such, making me question how much of Taylor’s script was changed.

I have a feeling that Taylor’s script didn’t start out with Alice Jarett (Lynne Adams) going to a mental ward. Her husband, Martin (Pierre Lenoir), checks her in and stays at her side during visiting hours until she’s released. When she is, he takes her to their new home in the countryside. It still has some renovations, so a crew of carpenters will be working there.

Alice is awoken the first night to the sound of drilling in the basement. She goes down to discover Ned (Wings Hauser), a carpenter who she believes is one of the gang. She doesn’t think this for long, as she witnesses Ned’s short temper explode on one of the sleaze balls when he makes a move on Alice. He saws his arms off and she watches nonchalantly. That’s right, she seems perfectly fine with this unknown carpenter hacking and slashing her hired carpenters. She is crazy!

She soon learns from a local cop (who I believe gave her a visit to check in on the missing carpenter, though I don’t remember him specifically stating so) that Ned was a successful carpenter who slowly went insane. The house she resides in is the one he previously owned. He worked round the clock to craft his perfect house. This resulted in him not taking any actual paying jobs. His wife left him because of this and his house was repossessed. He snapped and slaughtered those who tried to take him down. He got the electric chair for this.

Instead of freaking out, Alice confides in Ned (she even tells the cop he sounded like a nice man, which is absolutely creepy considering all she heard from him was that he was a psychopath). Wellington hints at the possibility that Ned is a figment of her warped imagination. She’s stated that her mental problems sometimes make her see things that aren’t there. The only inherent problem with this theory is that the carpenters recognize Ned’s work and think scabs are picking up their overtime. Unless Alice is doing the construction overnight herself, Ned has to exist.

Wellington gives Alice more emotional baggage by turning her husband into a douche bag. He seemed nice enough from the start, but we shortly learn after they move in that he’s a prick. He’s rude to the carpenters (though most of them are drunks who constantly goof off, so his attitude is justified) and he’s cheating on his wife. He even gets his mistress (who’s also his student in college) pregnant. Lenoir pulls off the character well and makes you hate him. The issue at hand is that it all unravels like a cheesy soap opera.

It may sound like I’m knocking “The Carpenter”, which I slightly am. It has a few more faults than it does pluses. I appreciated the attempt to do something different with the slasher genre, even if it didn’t all work out. Those coming in expecting a balls to the wall slasher won’t be completely satisfied, but Ned does off his victims in gruesome ways (and takes out a few rats with his nail gun). Wings Hauser is fantastic in his role, playing a goofy psychotic spouting off one-liners when dealing with his foes, but being gentle and kind towards Alice. Their brewing romance could have been hokey, but the two had tremendous chemistry and it worked out well.

Though I’m giving David Wellington credit, he does fumble as I mentioned. The finale starts strong, but slowly turns ludicrous. The film also suffers from pacing issues. The reason I believe Doug Taylor’s script was refurbished (pardon the pun) is because the actual slasher scenes feel off compared to the rest of the film. They move fast and are quite witty. The rest of the film moves slow, like a methodical thriller. This causes some lulls and slows the film down.

Depending on how you perceive it, “The Carpenter” is a better film than it sounds. If the idea of a psychotic carpenter haunting his old home sounds enjoyable (which it did to me), than this film may actually be lesser in your eyes. If the idea sounds laughable, than you’d be surprised to see there’s some craft behind it. For me, I appreciated the craft, but don’t feel it quite suited the slasher feel. I may appreciate the effort, but there’s parts of me that kind of wishes this was a crazy slasher flick.

MVT: Wings Hauser. He turns in a swell performance and can actually balance the mood swings the film goes through. He’s a hoot to watch!

Make or Break: It’s hard to pinpoint. I’ll go with the opening in the mental ward. I’m of the feeling that is slightly above average, so I’ll say this made the film. Even if it didn’t, it’s the perfect scene to choose as Wellington automatically shows you this isn’t a run of the mill slasher.