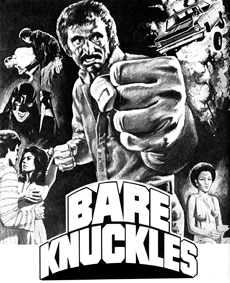 Mustaches amaze me (okay, that’s a mild overstatement).  You can disguise yourself with a beard, but a mustache somehow says something about a man’s character (and the characters of a few ladies).  Nothing belches forth the Drakkar Noir stench of machismo quite like a mustache.  Rivaled only by a thick carpeting of body hair as a display of manliness (something which is, today, not only rarely seen anymore but also tragically unacceptable socially, said the hirsute man), the mustache is the primal scream therapy of cult cinephiles the world over.  You may not even be able to grow a decent one yourself, but I would be willing to bet that you have stood awed in the brilliance of the testosterone-soaked light cast by some of the great mustaches in cinema history.  Charles Bronson had the subtle catfish style.  Lee Majors sported the chevron for a brief time (I would even argue it helped him tame Bionic Bigfoot).  Sam Elliott scoured the lips of his lovers with the walrus style.  But no matter which type of mustache is your personal preference, I think we can all agree on one thing: mustaches equal facial hair.

Zachary Kane (William Smith lookalike Robert Viharo) is a tough-as-nails, mustachioed bounty hunter (see?).  After meeting ugly with Jennifer (former Make Room For Daddy co-star, Sherry Jackson), Kane makes the lovely lady fall in love with him.  Meanwhile, serial killer Richard Devlin (Michael Heit) kills a jumpsuited (and whatever happened to jumpsuits, huh?) lady (Judith Novgrod) in front of multiple witnesses, but only one recognizes him, a singer named Barbara (Gloria Hendry) who, scared out of her wits, goes into hiding.  Joining forces with black bounty hunter Black (John Daniels), Kane hits the streets to stop Richard’s reign of terror but more importantly to get the reward for bringing him in (a cool $15K).

Don Edmonds is better known by leaps and bounds for his sleaze classic Ilsa: She-Wolf Of The SS, but Bare Knuckles is certainly an Action film worth seeing, in my estimation.  There is a level of gritty desolation that makes itself known from the very first scene.  Kane is beating the crud out of a perp and taking a few lumps himself.  After clubbing the bad guy into submission, there is no pithy quip from Kane, no self-satisfied grin.  If anything, he looks more upset.  The man has captured a criminal and is about to get paid for doing so, but he is completely unhappy.  He knows that this victory means nothing.  Not only is our hero essentially a nihilist, but he is also a sadomasochist.  He enjoys inflicting and receiving pain as a substitute for sex, even after he meets Jennifer.  In this way, he is equated with the villain.  Both live lives of violence, but Richard’s violence is much more overtly sexualized.  He attacks and kills women exclusively, and he does so because he has some severe mommy issues.  His mother is fairly loose with her affections, and since those affections are not directed at Richard, he feels that she is a whore.  By extension, then, any woman who Richard finds attractive is also a whore and fit for slaying.

By contrast, Kane’s violence is subtextually homoerotic in nature.  He enjoys intense physical contact with men (we assume he does so with Jennifer as well, though he tries to push her away and tells her to forget about him).  Along with the leather-vest-clad black cowboy Black, he visits a gay bar filled with rough trade to track down a witness to Devlin’s crime.  Soon, he is in a scuffle with all of the bar’s occupants, a metaphor for Kane’s sexual denial.  Later, he is caught by a gang of hoodlums, stripped, and beaten, and this interaction will wind up in grim violence, too.  But every time, it is men doing violence to men where Kane is involved, and it is something which he seeks out.  It’s reminiscent of the clichéd closeted homosexual who deals with his own self-loathing through brutality toward homosexuals.

By that same token, the stoicism Kane displays at all times is a callback to the hardboiled tradition, which the film also incorporates into itself.  Kane is summed up by the line, “black coffee, straight whisky, and unfiltered cigarettes.”  He is a street-level private dick who believes that “the jungle runs in all directions,” and since he posits himself at the bottom of it, that generally means that the higher one goes up the ladder, the worse the class of person you will meet.  Naturally, this ideology is epitomized in the character of Richard who, unlike Kane, comes from money and is an abhorrent human being.  Like a 1970s era Sam Spade he is patterned after, Kane loathes high society and would love nothing more than to bring it all crashing down to his level, and this even applies to his relationship with Jennifer who is much more cultured than Kane and becomes his pawn to get close to Richard.  Yet, you also suspect that even if he were able to accomplish the feat of destroying the cultural elite, he would have no idea what to do next.  Kane’s not a planner (or at least not a very good one), he is a reactionary, and like the pulp heroes he emulates, he is straightforward with everyone except himself.

The inciting incident of the film is a direct reference to the murder of Kitty Genovese in 1964.  For those who don’t know, Ms. Genovese was killed on a city street in Queens, New York in full view of numerous witnesses, none of whom lifted a finger to help the woman.  From this, came the idea of the bystander effect (the name says it all; they stand by and do nothing), which is a phenomenon heightened by the diffusion of responsibility (the idea being that if there are more witnesses present, one’s personal responsibility to offer assistance is lessened since there are so many other people present, so one of them should do something instead, and since they’re not doing anything, it’s acceptable at least in terms of personal guilt to also do nothing, because all of these other people’s inaction can’t be wrong, can it?).  In Bare Knuckles, this idea is slightly augmented.  The onlookers to the opening murder don’t simply gawp in shock at what they’re seeing or turn away.  No, they become enthralled in what they’re seeing.   It becomes another entertainment, their windows transformed into television sets tuned into the real world.  Like the rest of the film, violence is ever-present to the point that it is banal, a part of everyday life, but unlike Kane and Richard these witnesses are observers not participants.  Just like the film’s audience.

MVT:  The MVT is the low fidelity grittiness of the film’s general ambience.  Everything about the film feels like it was dragged in directly off the street and thrown up on the screen.  It’s an apocalyptic feeling that haunts the entirety of the film and deprives even the characters’ small victories of any joy.  And since that’s the case, there’s no way that anything can be considered a win.  It is violence and apathy and resignation stitched together in a kind of cosmic statement on and of nothingness.

Make Or Break:  The Make is the infiltration of the tenement around the middle of the film.  It is tense, and action-filled, and skincrawlingly disturbing in how it winds up.  It lays bare the base nature of the characters, and reveals that even those we may have assumed to be innocent are actually nothing more than venal animals.