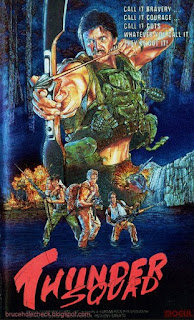 On the fictitious island of Manioca (incidentally, Manioca is a starch used in Tapioca), Tiquito, the son of deposed President Cordura (Franco Fantasia) is kidnapped by minions of the tyrannical (and very European-looking) General Gomez.  A mining company with interests on Manioca hire super nice mercenary Martin Cuomo (Antonio Sabato) and his team to rescue the boy.  Explosions and double crosses ensue.

Umberto Lenzi’s Wild Team (aka Thunder Squad aka I Cinque Del Condor) is a Men on a Mission film with a slightly different angle.  Rather than being hired by a crooked government agency, the team are hired by a crooked corporation.  The basic idea is that it’s money, not government, that truly controls the countries of the world.  Cordura is a freedom-loving idealist, but he has to make a deal with this devil in order to save not only his son but also his country (the former takes precedence over the latter).  Martin only cares about the money he’ll get for this job, but of course he and his crew become more personally invested as events unfold (or at least that’s the idea; I never felt that anyone in this film gave much of a shit about anything other than being a warm body in a movie).  The corporation, headed by fat cat Harker (Geoffrey Copleston), cares only for their bottom line.  Consequently, they have no qualms about betraying Martin and his team and the people of Manioca as soon as there’s the faintest whiff that the winds of change are going to blow.  The corporation starts off working with Gomez, switches to Cordura, then back to Gomez.  It’s baffling, since they had projected a fifteen percent increase in profits under a more democratic government, but I’m not enough of a global economist to parse out the reasoning.  This is a theme running though many Action films of this bent: The people holding the purse strings and/or the leash are never trustworthy.  No matter how many guarantees they give, they’ll screw over their operatives if it suits their needs (and many times, they are never forthright in their goals and motives in the first place).  So, pro-tip: If you’re a mercenary with a high price tag, get paid up front, and always cover your own ass.

There are a couple of touches in the film that come out of left field, though they make sense in an Italian genre film sort of way.  The first is the use of psychics (yes, really).  Three people with ESP are hired by the mining company to help locate Tiquito.  They are strapped into a computer, and as they describe the “hits” they get on the boy, the computer “interprets” what they say and pukes out unhelpful data.  This scene is, number one, just plain odd.  I mean, why would you hire psychics, who are unreliable at best and charlatans at worst, when you can fly surveillance planes over the area to find what you’re looking for (and to be clear, it’s not as if Gomez’s camp is all that well-hidden)?  They certainly have the resources for it.  Number two, this sequence is way longer than it should be (always a sign that there’s simply not enough material to make one decent film).  This section of the film stands out because of the focus on it.  Yet, there are no parapsychological or fantastic elements in the entire rest of the film (I’ll admit, I got my hopes up for a fight with a giant snake toward the end, but naturally, they were dashed).

The storming of Gomez’s camp takes up a large part of the film’s middle portion, but it leads off with our heroes hang gliding down into the valley.  As with the psychic scene, this sequence is entirely too long, and it stops the film dead (this in a film without much life to begin with).  More than this, it’s bewildering because the hang gliders they use are the most brightly colored things they could possibly find.  Obviously, being covert is not a big priority on this covert mission.  Maybe Martin got a great deal on the hang gliders that he couldn’t pass up?

This leads into another interestingly flubbed facet of the film.  One of the team members is Sybil Slater (Julia Kent), and she is their explosives expert.  Apparently, her brother was meant to be in on the mission, but he’s in jail (let’s assume for blowing things up), and Sybil needs money for an attorney.  In order to prove herself, she blows up a ramshackle hut while she’s inside it (she gets a couple of black smudges on her face).  Sybil is also very aggressive.  As soon as the men pull up and commence drooling over her, she warns that she’ll “blow [their] balls off.”  For as tough as she’s supposed to be, however, she’s just a girl in a man’s world.  She’s scared by a snake in the jungle, and all the guys get a good laugh over this.  She lands her hang glider in a tree and can’t get down by herself, and all the guys get a good laugh over this.  In her defense, Sybil does blow stuff up real good, but she’s not going to win any awards for being a strong female role model.

I’m going to be honest with you.  I’m not the world’s biggest Lenzi fan.  I know a lot of folks go apeshit over films of his (especially Nightmare City, which is decent fun in an incoherently incompetent way), but for me, they tend to be middle of the road at best, and Wild Team is no exception (in fact, it’s maybe more middle of the road than other films of his).  Granted, it was made with a tiny budget, but I’ve seen films with less money behind them made by people with less experience than Lenzi (who was used to low budget filmmaking) that were more cogent than this one.  Even Sabato, who normally provides some magnetism in his films (funny enough, his and Lenzi’s Gang War In Milan is a film I do enjoy), is as plastically charmless as the toy guns the actors use.  If you like seeing things explode, you’ll find something to like here, but this isn’t essential as an Umberto Lenzi film, an Antonio Sabato film (or an Ivan Rassimov film, take your pick), or an action film in general.

MVT:  For as blandly slapdash as it’s shot and edited, the action in the film is the only thing holding this film together, like a cheap brand of duct tape.

Make or Break:  We are introduced to Martin and his team during a training exercise for soldiers.  After beating the soldiers quite handily, Martin’s crew still come out of the site in handcuffs (and if they didn’t, it sure looked like they did from where I was sitting)!  There’s absolutely no logical explanation for this, and it lets you know just how dumb this whole thing is going to be.