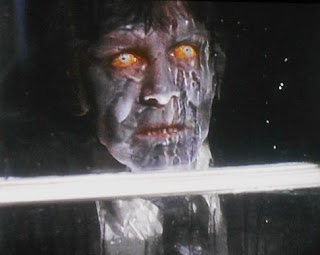 Journalism, as a career for cinematic and television protagonists, isn’t in favor like it once was.  This could be because technology has changed how news is both reported and absorbed.  It could be because journalists aren’t as trustworthy as they used to be (which also ties in with how technology has changed the landscape).  Outside of social issue films, journalists just ain’t sexy no more.  The only two recent exceptions to this that I can think of are Clark Kent in any given DC Comics film featuring Superman and Sam Turner and Jake Williams in Ti West’s The Sacrament.  While I’m sure people are still inquisitive, there is also a bold streak of cynicism that pervades most people’s attitude toward everything they hear (I’m no exception).  If anything, this should provide a hardboiled edge to any contemporary journalist characters, marrying the nobility of truth-seeking and the gruff edge of film noir.

On television, we still have cop shows, lawyer shows, doctor shows, etcetera, but no shows about reporters spring to my mind.  Gone are the Lou Grants, the Murphy Browns, the Les Nessmans, sequestered off to discreet retirements though they’re sometimes whispered about in nostalgic reveries of when reporting was a noble cause worthy of pursuit.  It can be argued that most protagonists on the boob tube are truth-seekers; the police who solve crimes, the lawyers who defend the wrongly accused or prosecute the wicked, the soldiers and agents who fight amorphous menaces that threaten our existence, the doctors who must find the cure for a mystery illness.  But the main difference is that the reporter sheds light on things so the whole world can see, and while the other archetypes sometimes strive for a sense of transparency, their findings are often isolated, given weight in how they affect even only a few lives.  If they do carry more widespread ramifications, they are likely hushed up or spoken of only in muted tones.  Characters like David Norliss (Roy Thinnes) in Dan Curtis’ The Norliss Tapes shouts his findings from the rafters, and this narrative deals with the consequences of that.

In The Norliss Tapes, the truth is something worth pursuing, but it comes with a heavy price (it has to, the truth being something the powers-that-be seldom want known).  As Norliss delves deeper into the mystery of Jim’s reanimation, people around him start dropping like flies.  This applies not only to Norliss and Ellen’s acquaintances but also to completely innocent bystanders.  Further than that is the possibility that our protagonist may not be able to save anyone at all, himself included (this is the basic premise of the series this film was intended to spin off and didn’t).  In a post-JFK assassination, post-Vietnam War, post-Watergate America, this type of foreboding ambiguity was popular.  It wasn’t enough that we didn’t trusted in our institutions anymore.  Our heroes had changed, too.  They were no longer stalwart supermen who always saved the day and got the girl.  More and more, they were everymen with flaws and doubts we recognized in ourselves.  They didn’t necessarily come out on top, and even when they did, they typically were left to ponder the aftermath of their actions.  They had become reflective of the cultural timbre.  Norliss is no different.  His attempts at stopping Jim are constantly stymied because he doesn’t fully grasp the monster’s nature, and though this doesn’t discourage his resolve, ultimately, he’s left with the realization that he’s in way over his head.  It was a common feeling for the era.

Another interesting aspect of this film is its intertwining of art and the supernatural.  While nothing new in and of itself, The Norliss Tapes deals specifically with the creation of art and, by extension, the creation of life.  Jim is known in the art world, though I can’t recall if it’s ever mentioned how successful or well-regarded he is.  At any rate, he makes a deal with a demon named Sargoth (Bob Schott) whereby Jim will be granted immortality via an ancient Egyptian ring after he completes a sculpture of Sargoth made from a mixture of clay and blood (hence Jim’s victims).  The sculpture provides a gateway (or a birth canal, if you will) for the demon to be born onto our Earthly plane.  Further, Jim’s sculpture, like Norliss’ writing, imparts another means to eternal life, assuming some portion of his body of work remains extant.  This is something which has forever fascinated me as a concept, to create something living outside the marriage of egg and sperm, and it begs quite a few questions.  Why do we create in the first place?  What does it say about us?  What does it say about itself?  Is the act of creation governed by us or by some external force?  What happens when what we create becomes bigger than us or grows beyond our control?  It’s a simple idea which leads to a labyrinth of things to ponder, and it’s here in this film, just not especially developed.

The Norliss Tapes followed hot on the heels of the Curtis-produced The Night Stalker, which gave us the character of Carl Kolchak, arguably one of the most enduring and beloved cult figures in genre circles.  It’s no surprise that this later film gets lumped in with The Night Stalker as it’s practically a carbon copy of it.  Norliss and Kolchak are both writers.  They both want to find the truth and disseminate it.  They both encounter the supernatural and attempt to overcome it with their wits, though Kolchak is a natural believer in the paranormal and Norliss is a skeptic.  They both must face the consequences of their actions.  They both start their films in a lowly state, and their tales are told in flashback.  That said, it’s clear to see why Kolchak got a (short-lived) series and Norliss did not.  For one thing, The Night Stalker dealt with a vampire, a popular monster even back then (its sequel, The Night Strangler, dealt with a slightly less standard boogeyman), while zombies hadn’t yet taken off like they have today (the demon aspect doesn’t crop up until the last act).  Also, Kolchak is a journalist, which naturally allows him to meet up with interesting characters in the course of his investigations.  Norliss, as a writer of books, is more solitary and internalized, but he tries.  Most of all, Darren McGavin played Kolchak as a charming huckster, right down to his seersucker suit and straw hat.  Thinnes, as much as I like him, is far too dry and brooding for audiences to want to follow him overlong in this mode.  It’s kind of a shame, because the final setup to the hoped-for series may have been just enough to overcome its failings.  We’ll never know.

MVT:  The story has enough familiar and strange elements to feel almost fresh, though the shadow of Kolchak looms large.

Make or Break:  The final scene is open to the possibilities this property could have been.  Plus, it eschews a classic, upbeat ending for something more sinister and nebulous.