From the man who brought us the highly-acclaimed LADY TERMINATOR comes this star-studded love story under the guise of a supernatural horror film. OK, all sarcasm aside, this bat-shit insane Indonesian horror movie revolves around an American author named Catherine who's doing some research in Bali for a book she's writing on the subject of Black Magic. And, of course, what better way to get an understanding of something such as Black Magic than to become a practitioner of it. Dumb broad. With the help of a suave local named Mahendra, Catherine hooks up with a local witch who practices the art of Leyak Magic something-or-another. With Leyak Magic comes the ability to transform oneself into an animal or some sort of destructive object, more or less. 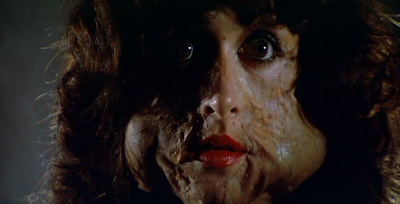 Aside from the supernatural business, there's a really awkward romance subplot involving Catherine and Mahendra. They hold hands a lot (how cute) and kiss every once in a while. It's obvious that Catherine wants Mahendra's ringading-dangdong inside of her, but for some reason (SPOILER ALERT) Mahendra never seals the deal. Could it have something to do with the strange woman that's been spying on them from afar throughout most of the movie? You'll have to watch the movie to find out. I know, the suspense must be killing you. 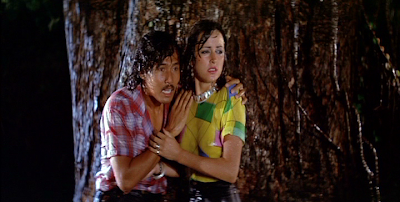 On a personal note, I've heard about this movie somewhere before, but never really sought it out. The reason I decided to give it a watch now is because I looked up a list of horror movies with the most bizarre monsters or villains and found this film's particular villain to be too awesome to pass up. Most of the films on the list were a revelation to me, but there were some films on there that I've either heard about or have seen before. Included among the list of bizarre baddies were killer condoms, killer blow-up dolls, and beds that eat people, just to name a few. MYSTICS IN BALI was listed as having a levitating disembodied head (with entrails still attached!) that attacks people and re-attaches back to its host upon completion. How this comes about is that - to keep it as brief as possible - Catherine becomes possessed and is basically controlled by the evil witch, which results in her head detaching from her body and terrorizing people in a nearby village.

Despite there being a dramatic difference in film quality during the floating head sequences (or any other scene involving special effects for that matter) in comparison to the rest of the movie, Catherine's disembodied head is still an awesome sight to behold because of how utterly stupid it looks, but yet it's also quite fitting for such an insane film as MYSTICS IN BALI. As it turns out, that's not all the film has to offer in terms of over-the-top horror elements. Throughout Catherine's stint as a practitioner of Black Magic, she also turns into a pig monster and a snake woman. We also get moments of Body Horror (Bali Horror?), as well as a nasty vomiting scene and, of course, the witch herself who spends most of the movie cackling and sounding awfully similar to the vocalist from Dimmu Borgir. 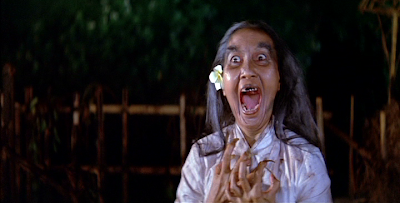 While the film is indeed filled with moments of sheer Indonesian insanity, the parts of the film that take place in between those insane moments are boring and meandering. Had I been watching the film casually and without the intention of reviewing it, I would have made a habit of fast forwarding to the "good parts". Nonetheless, MYSTICS IN BALI is apparently one of the better horror films to have come out of Indonesia, and one that caters to Western audiences while maintaining its Eastern roots and folklore. Available on DVD through the Mondo Macabro label, this film is worth seeking out for those who appreciate absurd and obscure horror cinema, despite its faults. On a side note, lead actress Ilona Agathe Bastian was just some German tourist who was on vacation and approached by a producer to star in the movie.

Make or Break: What made the film for me was the scene in which Catherine engaged in a bizarre dancing ritual with the witch and eventually turned into a pig. Going into MYSTICS IN BALI, the knowledge that the film was going to be "strange" was there, but this particular scene is what really kicks the film into gear and sets the tone for the rest of the insanity.

MVT: As much as I'd like to show director H. Tjut Djalil some love for putting together such an insane movie, there's no way that I can not award the "most valuable thing" in the film to the floating head. It's so ludicrous, and the fact that the filmmakers decided to present the head with its body's internal organs still attached makes it that much more awesome. 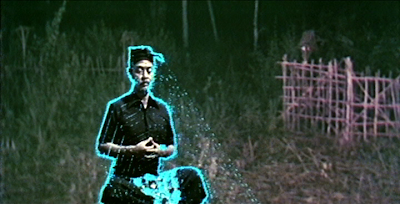