Conducted By: Justin Bozung
Host Of The Mondo Film Podcast 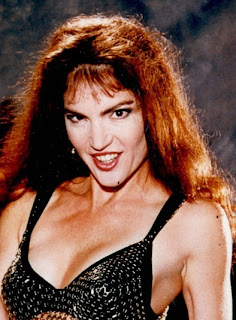 It was because of my obsession with Rhonda Shear on the USA Network television series Up All Night (1986-1997) that I was provided a diverse education in all things B-movie growing up in the late '80s. Shear was one of the best late night movie hosts in the final days of the medium prior to the new Renaissance on public access stations across the United States today.  It was because of this show that I saw for the first time, Brinke Stevens in director David DeCoteau's Nightmare Sisters (1988). As time would tell, I would see more of Brinke's work on USA's Up All Night series as the years went by.  Films starring Stevens like Transylvania Twist, Sorority Babes In The Slime Ball Bowl A Rama, Slave Girls Beyond Infinity, and Teenage Exorcist all became some of my favorite B-movies of all time.  I still enjoy Brinke's work all these years later.

Brinke was a key player in the invasion of the B girls during the 80's. She, along with Linnea Quigley, Michelle Bauer and others were dubbed the "Scream Queens."  To be a scream queen, you had to qualify.  First, you had to be super sexy, gorgeous, and have the ability to act. Next, you had to be willing to shed your clothes, and run around in the woods or in a abandoned house or a bowling alley and escape every monster, axe-man, or anything supernatural that wanted to impregnate you then rip your head off.  And most importantly, you must have the ability to produce the loudest, most deafening ear numbing scream when in danger. 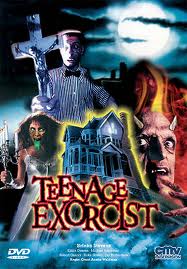 Brinke was a pioneer and more so, the best of the original "Scream Queens".   The loudest scream in B cinema to disrobe in the golden era. I truly miss the queens of the 80's. The B-movies of today, feature the beauty and nudity of the golden days but none of the girls can act their way out of the blood soaked paper bag their stuck in.

What most people don't know about Brinke, is that she is a member of MENSA. She can speak several languages, and she's written several screenplays. The standout being her cheeky 1991 cult film, Teenage Exorcist.  Stevens has appeared in over one hundred and twenty-five movies in the last thirty years.   She's a true icon of the B-movie, and after all these years later is still so incredibly talented and beautiful.  I had no choice but to corner her recently at my local horror convention like a crazed horny axe-man on the loose looking to make all the girls scream... Here's how it went.

JUSTIN: Brinke, you certainly are one of the sexiest and greatest women of B-movie history.  The real "Scream Queens" (like yourself) that could actually act are now gone.  Well, at least they're laying low. Could you share some of your fondest memories of the glorious 80's, when you "Scream Queens" reigned supreme over all things B?

BRINKE STEVENS:  The 1980s were a unique time for "Scream Queens" and sexy horror-comedies.  It happened during the rise of home video, and it made big cult stars of Linnea Quigley, Michelle Bauer, and myself.  Back then, we were just hard-working actresses who took every project that came along... and there were so many cool movies being shot in Hollywood that decade.   As a result, I've since starred in over 125 horror movies during the past thirty years.  Now, B-movies are being made everywhere in the world on even smaller budgets, with lots of new actors and directors.  The low-budget studio system has fallen apart... it's a past era that we can celebrate, but it  will probably never be the same again.

JUSTIN: I read online that you actually had a part in the original William Castle production with Vincent Price, The Tingler (1959) as a small child.  Is that true? 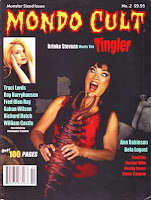 BRINKE STEVENS: Not true, but pretty funny!  The Tingler was actually shot in the 1950's, so I probably hadn't even been born yet.  However, I DID pose for the cover of Mondo Cult magazine recently, holding a prop of the old  "Tingler" monster in my hands.

JUSTIN:  One of my favorite films you've done is Nightmare Sisters.   What was that experience like?  Can you share something about the production that none of us fans know?

BRINKE STEVENS:  That was such a charming little movie!  We shot the whole thing in just four days.  We were very well-rehearsed, which helped a lot -- and you'll notice the camera barely moves or changes angles during many scenes.  And that HAS to be the longest bathtub scene in movie history!  Fortunately, we were all great friends and didn't mind sharing a hot bath together while ad-libbing our dialog.  In the T.V version, the tub-scene was replaced with us three clad in lingerie, romping on a big bed while tossing balloons.

JUSTIN:  You've been amazingly productive in the film industry, writing and acting. Do you think you'd ever be interested in setting into the director's seat?

BRINKE STEVENS:  I've been attached to several projects as a director, but they all fell through in the long run.  I'd certainly like to try my hand at directing someday... I think I'd be pretty good at it.

JUSTIN:  You were the first to grace the cover of one of the greatest cult B-movie magazines ever, Femme Fatales magazine. Looking back,  do you look at the nudity in films and magazines you did -- different now than back in the 80's and early 90's?  Meaning, are you comfortable with the work you did in that vein back then? 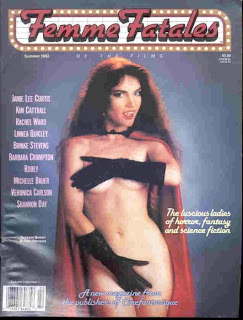 BRINK STEVENS:  During the 1980's B-movie boom, all of us actresses were required to do nudity in films.  It just went with the territory, so you had to go along with it.  None of us really minded, of course.  We were all very athletic and comfortable with our figures.  However, when editor Bill George first showed me the cover of Femme Fatales #1, I was like, "O my god, surely you can't put THAT on newsstands!"  But it worked out okay for them, thank goodness.  I'm proud of my past pin-up work, but nowadays I tend to get more age-appropriate roles like mothers, aunts, doctors, detectives, and professors.  In Summer of Massacre, for example, I was actually SO glad to have some meaty dialog scenes (playing the Mom) -- and to not be the young actress who had to get naked, run from a killer, scream, and die horribly in the woods.  Much less strenuous and messy!

JUSTIN:  What does 2010 have in store for Brinke Stevens? 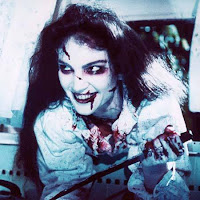 BRINKE STEVENS:  I hope to shoot a new zombie thriller called Deadlands 3 this autumn, and also reprise the Vampira-role in the upcoming Plan 9 remake from Darkstone Entertainment. Three horror movies that I shot last year will be released soon -- The Ritual from Fleet Street Films (I play a serial killer's deranged mother); Joe Castro's Summer of Massacre; and The Boneyard Collection (Irina Bell Films), which has been accepted at the Cannes Film Festival. I just wrote a tribute about Forry Ackerman for the new Famous Monsters magazine (FM #251).  I'm currently working on a new spec script, tentatively titled Fellini in Hollywood, about my amazing encounter with famed Italian filmmaker Federico Fellini in the 1980's

JUSTIN:  Are you still in touch with the girls of your past? Linnea Quigley, Michelle Bauer, or Monique Gabrielle?  Of all those girls who was your favorite to work with?

BRINKE STEVENS:  Occasionally, we all meet up at conventions (like this April's  Monsterpalooza in Burbank CA.).  We really look forward to such reunions, and the fans seem to love it too.  We're always gotten along so well, and I wish I could see these gals more often, but we live in  different states now.

JUSTIN:  One of the more interesting things about your early career are all the uncredited appearances you made, in some really important and memorable films of the 80's.  Was that difficult for you to be getting all these walk on roles and not getting credit for it?  Or did you just look at it, as something you just had to do to achieve your next step?

BRINKE STEVENS: When I first started out in Hollywood, I had walk-on parts in Body Double, Three Amigos, Psycho 3, This Is Spinal Tap, and many more.  I was just so glad to be earning a living!  It would be another five years before I'd become a recognizable name in the horror industry.  So yes, everyone has to pay their dues so to speak, and those were mine.

JUSTIN:  I'm a huge fan of the anthology film you did with Michelle Bauer and Fred Olen Ray and Jim Wynorski called Scream Queen Hot Tub Party (1991).  Any chance we could get everyone on board to do a sequel?

BRINKE STEVENS:   It was so iconic of that era... I'm not sure a sequel would go over as well now.  It was a really fun, wacky project and I'll always think of it fondly.  Fred was one of my most favorite filmmakers, and it was always such a pleasure to work with him in the 1980's and 90's.

JUSTIN:  Whats one thing that no one knows about you? 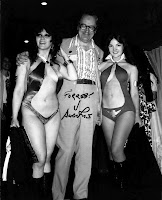 BRINKE STEVENS:   Last year, I was an official guest at San Diego Comic-Con, where I was honored as one of the original founding members way back in the 1970's.  In 1974, I'd won First Place in their first Masquerade contest, as "Vampirella" -- and I was pretty much put in charge of running the Comic-Con masquerade for years after that.  I watched it go from a tiny comic book club in college, to a huge extravaganza attended by over 125,000 fans now. I was also the very first actresses to ever sit behind a table at any fan convention and sell her own autographed photos.  Now, of course, it's become a nationwide industry.

For more with Brinke Stevens pleas check out her official website here.  For more interviews by Justin, please check out his official interview archive here.

Posted by Justin Bozung at 6:18 AM