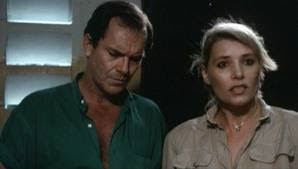 'Ratman' opens with a mad scientist voiceover, babbling on whilst two men fumble in what looks like a mop cupboard. One of them uncovers what looks like a wire bin. Inside that bin lies the Ratman, who is actually some kind of little man with obvious disabilities made to look dirty. The film then follows various people wandering about, including David Warbeck as some kind of mystery writer, some falling to the bite of the Ratman, others not.

Directed by Giuliani Carnimeo, 'Ratman' stars the 'world's smallest actor' Nelson De La Rosa ,who was 72cm tall. He certainly seems to have fun clawing people but the rest of the movie is so damned dreary, it's a pain in the arse. David Warbeck is suitably lantern-jawed but seems to be dubbed and hardly does anything. The gore is pretty minimal, apart from someone getting clawed in the vagina whilst in a warddrobe and is pretty much just red paint daubed about the screen. 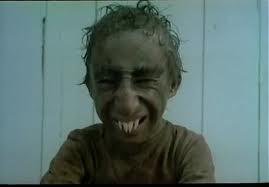 Carimeo made some pretty average spaghettis but displayed a good eye for tension and silliness in his giallo 'The Case Of The Bloody Iris'. Ratman is sadly as entertaining as a tin of dog food. My major complaint is the ending, in which some stock footage is used and some people scream. It's awful. I suffered major depression after watching this. I actually just went to my bed. AND I was drunk while I watched it, on 5 litres of cheap dry cider.

Now I have a tolerance for cinematic trash but this film was just awful, not even funny bad. Taken as a proper film it's rubbish, taken as a piece of trash it's rubbish. you just cannot win with Ratman, it's fucking rubbish.

Most valuble thing: Nothing.

Make Or Break: The whole damn film is broken.