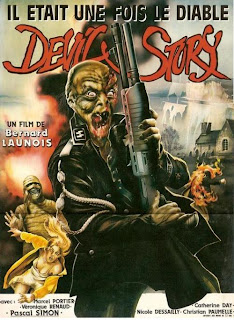 After my screening of “Devil Story”, I deduced that the plot is as follows; a family of pirates raid an island commune and overtake the premises. They partake in incest and give birth to a deformed son and a surprisingly normal daughter. The few remaining locals kill the daughter and take refuge in a castle. The two factions wage war against another, which results in the pirates reviving their mummified grandfather, who was seemingly brushing his teeth when he was killed as he constantly spits out toothpaste. Oh, and they travel via a Devil Horse that does nothing but stomp and neigh his way around the island. I haven’t seen a useless horse get this much screen time since the last “Sex and the City” film.

Take out the whole warring factions that I mentioned and replace it with a damsel in distress (who has no name on IMDB, which is fitting as she has no personality). He and her boyfriend stay the night at the castle (which doubles as a hotel for tourists who want to see incestual pirates) until their car is fixed in the morning. He goes missing, she goes looking for him, she finds the pirates, multiple chases ensue, yadda yadda yadda. This is the most homogenized slasher I’ve seen since “Ogroff the Axe Monster”. At least that one was fun.

I hate to accuse Bernard Launois of being a drug addict, but it’s the only conclusion I can come to that makes sense of this film. Nothing in this film makes sense. The last two paragraphs you read are my assumptions of what the plot is and that’s after my screening. The only thing for certain is that a beautiful woman was being chased a lot. Everything else is in the air. There was an urban legend of the pirates told by the castle owner, but it didn’t make a lick of sense. Hence why I came up with my own theory.

To further my belief that Launois was on drugs during the filming of this movie, let me break down how the film moved along. We open with the mutated son killing a few people and throwing them in a ditch. His murders, it should be stated, don’t match up. He shoots one woman in the face, yet when she turns to the camera, she has slashes. Did he load the shotgun with knives?

Anyway, the monster kills a few people then meets up with his mother. She’s whining and complaining about how her daughter is dead and they have to bury her. She’s also bitching about the Devil Horse making noise. He seemingly is insulted by this and travels to the castle, where the damsel in distress and her boyfriend have arrived. We get the aforementioned folktale and she wanders off into the night.

She happens upon the family and falls into their daughter’s grave. They abduct her and plan to kill her by resurrecting a Mummy. Said Mummy chases her and spits out toothpaste. The monster takes his place as the Mummy and the newly resurrected daughter (or maybe it was the mother sporting a new hairdo, I don’t know or care) plod around the island. The monster chases the girl for what seems like an eternity. He’s set on fire and shot at, but doesn’t die. She gets her car to start working, but runs out of gas (which she used the last of to pour on the monster). Rinse, wash, repeat.

The two eventually stumble upon a cave where the destroyed ship is. The old man from the castle is also there, trying his best to shoot the Devil Horse. This results in multiple shots of the horse running around repeated ad nauseam. These shots play throughout the film to pad the meager seventy-three minute runtime, by the way. I won’t spoil the rest for you brave souls who want to watch this garbage, but I will say the twist is mind-bogglingly stupid!

Did any of that make sense to you? If the answer is anything other than “no”, see a psychiatrist. If you answered correctly, avoid this movie! This is coming from the Cinemasochist himself. “Devil Story” is confusing and quite dull! The seventy-three minute runtime feels like an eternity. The only person I’d force this upon is Roger Ebert, solely because he always talks about having seen the worst films ever. After watching this, he’d probably quit the business!

MVT: The monster, I guess. His makeup was alright, though not as cool as on the cover (go figure).

Make or Break: The countless shots of the horse doing absolutely nothing broke this film for me (even more so).