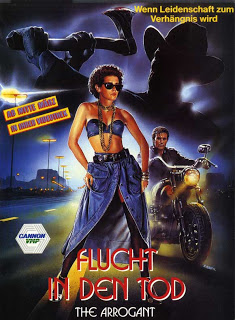 Out of all the implements of death any character can have at their disposal, I think that the axe is perhaps the least well-used (just hear me out).  Since this is one of those things that can be debated ad nauseum, and since we’re not actually speaking (I know, my writing is so good that sometimes it feels like we are, but we’re not), I’ll just give you some of my reasoning on the matter.  The axe is a cleaving weapon.  Aside from having a spear point at the top end of the haft, the weapon can’t really be used for stabbing.  Add to that the fact that, typically, an axe (okay, maybe just a battleaxe) is not only heavy but top-heavy at that.  Almost any blow that can be delivered with an axe will usually be done by hauling off with both hands on the axe handle, thus  telegraphing your shot, so to speak, and giving the user no free hand to block any incoming attack.  Much like the three-section staff, the axe is a weapon which must be mastered to be used effectively.  Oh, sure, slashers have used axes to mount up a nice body count, but rarely are they used with any true finesse.  To my mind, only one fictional character (beside Paul Bunyan, but he had other advantages, a giant blue bull notwithstanding) has truly belonged with an axe in his hand, and that would be Conan of Cimmeria, by Crom.  Search your conscience.  You know I’m right on this one.

Giovanni (Gary Graham) is a bit of a spoiled prick.  At dinner with his Senator father-in-law (Joe Condon) and apparently his entire extended family, Giovanni and the old man basically tell each other how much they want each other dead.  Giovanni sneaks off, ostensibly to get some wine from the garage wine cellar but actually to bang his wife Elvira’s (Kimberly Baucum) sister Laticia (Leigh Wood).  Having picked up a black cat during all this (read: foreshadowing), Giovanni is confronted by the Senator on his way back to the dinner.  Wielding an axe, the Senator only succeeds in splitting the cat in twain (see?) and sending Giovanni through a window, a shard of which Giovanni uses to stab and kill the Senator.  Feeling suddenly unwelcome and wanting to continue his journey of bald-faced debauchery, Giovanni takes off on his motorcycle (and for the purposes of this review, I would suggest pronouncing it “motor-sickle” in your head as you read this) and makes for the desert.  There he picks up hitchhiking waitress Julie (the late, great Sylvia Kristel), and the pair travel around for the rest of the film.

To give you more of the “plot” of Philippe Blot’s The Arrogant (aka Sylvia Kristel’s Desires) would only wind up being an exercise in futility.  On that same note, if what I’ve written above entices you in any way to see this film, you have my sincerest apologies.  This can best be described as an Art film, though it’s not very artfully done.  The plot is set up like a series of vignettes punctuated by extended scenes (let’s call them diatribes) of Giovanni and Julie having “deep” philosophical debates.  In my opinion, Art films, like Science Fiction films should give you its points, raise questions, and give the viewer something on which to ponder.  The much-parodied dialogue style of this type of film is usually intentionally oblique (“You impede me.  I excrete you.” – thank you to Saturday Night Live’s “Sprockets” for that one).  It is meant to generate ideas, to engage the viewer and force (for lack of a better term) an active thought process in order to digest the work (though sometimes the intent is to confound, as well).  This is why Art films are so notoriously difficult to do well and why they are so easy to parody.  Blot’s film posits itself as an Art film, so we expect a bit of pretension to go with his ideas.

Unfortunately, what we get is a lot of pretension and some seriously self-serious dialogue that could be called purple-nosed, since that is its style and placement.  Witness:  “There is nothing worse than virtue and those who speak of it.”  “You confuse rage with vengeance.”  “I am my king!  My master!  My fate and my god!”  “I don’t know anything about God, but you drive me into Hell.”  The list goes on.  It feels as if Blot took a few first year college philosophy classes and tried to do his best at aping what he thought he learned.  His visual style is no different.  A black limo follows Giovanni around, a symbol for his past following him as well as an angel of death biding its time for the right moment.  At one point, Giovanni seduces a young woman (Teresa Gilmore), and the scene is shot almost entirely from his perspective.  The few cut-aways in the scene are almost always of Giovanni’s eyes in extreme closeup, frozen in a lupine stare.  The obvious meaning is not just of the control of the male gaze but also that Giovanni is a wolf who takes what he wants.  All well and good, but the mashing together of the closeups with the POV camera work draws attention to itself and not in a good way.  Rather than permitting us to think about the film, Blot tells us what to think at almost every turn while managing to remain befuddling.  It is ham-fisted metaphoric filmmaking, and it all amounts to a lecture being delivered to the audience, something which most intelligent viewers will resist and resent (I’m not saying I’m oh-so-smart, but how much do you enjoy receiving a talking-to?).

The Arrogant is also very much a religious film, and calling it heavy-handed is like saying the McGuire Twins were kind of stocky.  Regardless of your own personal views on religion, it is blindingly obvious that Blot does believe in a higher power, and he goes out of his way to pound the audience over the head with his views on it.  Giovanni is a bad man, but he is also arrogant (hence the title) in thinking that he can continue to defy God without consequence.  He’s supposed to be an anti-hero, but he actually comes off as being extremely unsavory.   As a counterpoint (and the only way the film is made even remotely palatable), Julie tries to convince Giovanni that he’s wrong and headed for disaster.  That she puts up with Giovanni’s antics at all is mind-boggling, but more headache-inducing is how their relationship ultimately resolves itself.  The entire film is a series of encounters with Giovanni basically being a massive douche and then challenging Julie to prove that he’s wrong, when he does it himself.  On a moral rather than religious scale, any viewer can still recognize that Giovanni does evil simply for the sake of evil, but he couches it as an act of defiance toward God, as if that makes it okay.  When the final “twist” is revealed, though, it is not only conspicuously predictable but illogical by the film’s own logic.  Even an Art film needs to follow some of the rules it establishes for itself (including the rule that “there are no rules”).  When it doesn’t, as it doesn’t here, it reeks of laziness trying to disguise itself as avant-garde filmmaking, and to my mind, that’s more offensive than any sinning our main character can get up to.

MVT:  The best thing about this film is the desert setting.  I love films shot in the desert, and there’s so much that can be done with it, visually and thematically.  Blot does manage to wring some nice images from the backdrop.  Though outside of that and seeing a few naked/semi-naked women, there’s really no reason anyone should ever watch this film.

Make Or Break:  The Break is the philosophical debate scenes between Giovanni and Julie.  These circular dialectics (wow, that’s giving them a hell of a lot of credit) are over-emphasized in the film, and by about the third one, they have not only made their point, but also worn out their welcome, crapped on your favorite throw rug, and lit your aquarium on fire.  They are pure garbage, and that they are the seeming center point of the film speaks volumes.