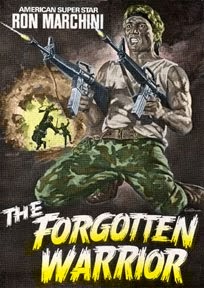 Steve Parrish (Ronald Marchini) is held in a “South East Asian” POW camp circa 1974 (the mind boggles at the possibilities of the actual location, huh?) along with two fellow soldiers.  After a “daring” escape, the three make it into the bush, where Major Thompson (Quincy Frazer) suddenly turns on his comrades, kills their Colonel (Mike Monty), and shoots Steve, allowing his body to fall into a nearby river and thus leaving him for dead.  But Steve’s wounded body is dredged out of the water by a village of nice people.  Will he live?  Will he find love?  Will he do something awesome to stop the unnamed Communist forces threatening to destroy his new way of life?  And what of Major Thompson?  Can he move on from the fact that one of his victims got away?  You’re dying to know, aren’t you?

Forgotten Warrior (aka Commander Rainbow aka The Forgotten Soldier) is credited to co-directors Nick Cacas and Charlie Ordoñez and it hails from the Philippines, land of cheap movie productions and wild-eyed cinematic knockoffs.  And like so many films from this region, especially at this time, it is more concerned with being an Action movie highlight reel rather than telling a story, developing its characters, or making any sense whatsoever.  This is not to say that it has nothing going on, nor does it mean that it’s horrendous.  The action is plentiful, and it’s even mildly well-executed from time to time.  Marchini seems versed in Martial Arts, giving the fight choreography a stronger-than-average sense of physicality and verisimilitude, even if the rest of the film is pretty much untethered from reality entirely.

Films like this have a real knack for sentimentality, and it is borne of a certain naiveté, which simultaneously both charming and risible.  Characters will make the most adolescent observations and then regard each other like John Bender’s impression of Brian Johnson’s family in The Breakfast Club.  This leads to a level of overwrought mawkishness when people close to the characters are harmed.  Everything done by the characters is meant to have deep spiritual meaning, but it’s so staged, it becomes pageantry in service of manipulating emotions we don’t share with these characters, because we’ve been given nothing about any of them other than their stereotypically broadest facets.  Of course, the revenge aspects work well enough (they always do, because the villains are so stereotypically malefic, we want them dead more than we are bored with the protagonists’ non-personalities), and this provides the opening to one of the more interesting pieces of this movie.

After Steve takes up life in the village, he begins to train the villagers, particularly love interest Maila’s (Marilyn Bautista) brother (who may or may not have been named “Van” and may or may not have been played by Sonny Villanueva) in the art of guerilla warfare and the proper deployment of military weaponry.  This is all in service of giving the villagers the means to defend themselves from the bad guys, at least ostensibly.  This idea that one man (an Anglo, at that) can change the villagers from scared victims into fearless fighters is a classic of the genre.  Yet, the villagers are largely incompetent at playing soldiers, and all of Steve’s efforts cannot change this.  So, we get this dichotomy between the shared fight against the Commie evildoers and the One-Man-Army who can wipe out scores of enemy combatants with little more than a Bowie knife and a thin bandana.  And while I’m at it, in what world would any soldier with half a brain wear a banana yellow muscle shirt into covert jungle actions?  Apparently, this guy, and while the rational portion of your brain struggles with such idiocy, the mirthful portion cannot help jumping for joy.  Back to the point, because the villagers cannot pick up what Steve is putting down, he attains a superiority to them which is messianic and just a little insulting.  But what this also does is marks Steve as being an outsider defined by his military background.  He cannot live in the village, and he cannot change the village to suit him.  If you’re looking for it, it provides an interesting point on the effects of war on people at a core level.

Of course, this is nothing new.  Ex-soldier Action Heroes are almost exclusively delineated by their struggle to put violence behind them and move on.  Nevertheless, violence forever follows these people, because they are intrinsically men (and women) of violence.  The sins of their pasts follow them, drag them down in the present, like the protagonists of a great many Films Noir, their destinies are inextricably linked in with their origins.  Steve has moved past Thompson’s betrayal.  He has found a certain harmony in his new life, despite his further dalliances with violence (because they serve a greater good).  So, Thompson’s return to finish what he started is Steve’s fate catching up with him.  It doesn’t matter if Steve was on the side of right or wrong when he was initially wounded.  He was associated with the ranks of the murderous, so his karma dictates that savagery lies in his future.

By that same token, Thompson and his associates are not only sadists but rapists as well.  They revel in the most repellant characteristics of base human behavior, and they are classic Ugly Americans.  In fact, no characters from outside the village bring anything with them other than devastation, and this includes Steve, who we expect to be the village’s savior.  It’s this sort of unconventionality that endears films like this one to us, even if it’s only a little bit.  There is a level of rule-breaking that gives these films an unpredictability despite their largely clichéd plots.  Naturally, this doesn’t always work for the betterment of a film, and often times the end result is an absolute mess.  But even in otherwise massive piles of crap, there are usually at least a couple of small diamonds to be found.  Not enough to make a viewer rich (or enriched) but enough to cast a small amount of light and distract the audience, leaving them with feelings more pleasant than unpleasant.

MVT:  The best thing in this film is the unrealistic behavior of the characters.  At any given time, they are maudlin, bloodthirsty, or overjoyed.  Every action and reaction is cranked up to eleven.  And while not reaching the level of hysterics of something like Strike Commando, Forgotten Warrior has nothing to be shy about either.

Make Or Break:  There’s a hilariously po-faced scene involving Steve and Maila staring up at a very fake rainbow and pontificating on its meaning.  It is stunningly priceless in its earnestness and total lack of anything even remotely resembling subtlety.  This scene alone should be exalted in the Trash Cinema Hall of Fame.