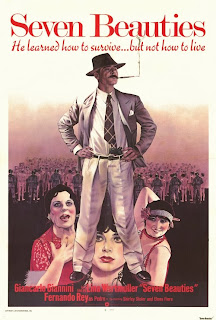 **I think there will be SPOILERS in this one.  You’ve been warned.**

Pasqualino Porfuso (Giancarlo Giannini) is a Neapolitan gadabout.  Given the nickname Settebellezze (aka Seven Beauties) because he is a smash with the ladies despite his perpetual sad-eyed looks, he is primarily occupied with the honor of his sisters and the respect of his fellow man.  Events transpire which force Pasqualino to join the Italian army under fascist leader Benito Mussolini, but the man still looks out only for himself.  Eventually Pasqualino finds himself holed up in a prison camp, where he will find the true measure of his character.

Lina Wertmüller’s film opens with a montage of stock footage from World War Two.  Over this, there is a semi-beat-poet-esque voiceover condemning every single person or institution who allowed Mussolini and the fascists to take power and who then conspired with the Nazis to commit crimes against humanity.  The filmmaker’s perspective is forceful and clear.  This is not going to be a balanced back and forth of ideas.  Thus, we get the character of Pasqualino, who is intended as a fairly typical Italian of the time.  He goes on and on about honor and respect.  He carries a gun, because he’s not physically imposing.  He doesn’t care about the war, and he doesn’t want to be a part of it.  He wants to get laid, get paid, and go about his daily routine.  Because he pays no mind to the struggle occurring outside his world view, and focuses only on his capitalist desires, he is guilty of indifference, and he will be punished for this.  He abrogates actual responsibility whenever he can to the point that he pleads insanity to avoid a death sentence.

For how much time and effort Pasqualino expends going on about honor and respect, he understands the concepts only on a surface level.  He is all about appearances, and he is constantly preening in front mirrors.  Much of the time before his life takes a nosedive, Pasqualino is photographed in an iconic fashion.  He considers himself a big man in Naples, so he is often shot from lower angles, aggrandizing him.  Later, he will be shot largely from high angles, making him a lowly figure.  He doesn’t want his sisters to go out with men who he feels are using them for sex, though his sisters understand that they are doing what needs to be done to get by.  By the film’s end, he will ask the innocent young lady (Francesca Marciano) whom he charmed earlier if she whored herself out to survive.  When she says “yes,” Pasqualino says that this is good, because he now understands the cost of survival which is meaningful versus the cost of his personal honor and respect, which is considered meaningless, especially during wartime.  He has been taught this lesson in the prison camp, where he seduced the repellant commandant (Shirley Stoler) in order to avoid execution (again) and get some food.  Afterward, she tells him, “your thirst for life disgusts me,” essentially hammering home the central idea of the film that it’s better to die on one’s feet than to live on one’s knees.  Of course, Pasqualino’s whoredom comes at an even greater cost, because after he is named barracks leader, he is forced to choose six people to be killed, otherwise the whole barracks will be.  Naturally, he makes the choices almost at random, reinforcing his complicity through his indifference and self-involvement.

Settebellezze kills two men directly during the runtime, and both of these instances revolve around, once more, concepts of honor and respect.  The first time, Pasqualino shoots his sister’s boyfriend/pimp/whatever Eighteen Karat Potono (Mario Conti) to regain his family’s honor.  However, the shooting occurs by accident, as Pasqualino thinks Potono is going for a gun.  Afterward, he is stunned that this happened at all, an indication that he’s all sizzle, no steak.  Later, he shoots his friend Francesco (Piero Di Iorio), execution-style while in the prison camp.  Francesco begs his friend to free him from the misery he can no longer endure.  This is Pasqualino’s final lesson on the truth of honor and respect, because he finally commits this act deliberately, and it tears at him.  He honors his friend and respects him enough to be the one to take his life, rather than letting the Nazis do it.

Before Porfuso becomes a Nazi sympathizer, however, he first  has to become a mental patient.  On trial for killing Potono, Pasqualino is told by his lawyer that if he pleads insanity, he’ll go to a hospital rather than prison.  Being a man of pride, Pasqualino refuses, but his lawyer advises, “It’s your honor or your life.”  Once in the hospital, Settebellezze manages to gain an orderly position in the women’s ward, surrounding himself with the things he likes most (even if they are insane).  However, he crosses the line (and it can be argued that this is the tipping point to his downfall) when he discovers a patient in restraints.  He peeks under her gown, gropes her body, and inevitably rapes her after taping her mouth closed.  The whole time, he tries to convince her that she loves it, because he’s Settebellezze and such a grand lover.  The patient disagrees vehemently.

After several subsequent shock treatment sessions, Pasqualino decides that maybe the army is just a little better than the asylum.  In actuality, they are merely exchanging one form of insanity for another.  When his journey is concluded, Pasqualino stares at himself in the mirror one last time (at least for the last time we will witness).  His hair is no longer slicked back but now a scraggly mess.  His expression is still hangdog but now his face is a mask of weariness rather than charm.  When consoled with the fact that at least he’s alive, he agrees, “Yes, I’m alive.”  But his eyes peer out from his reflection in Direct Address to the audience.  Because after all, we’re still alive, too.  It is not merely a condemnation of those who allowed the atrocities of World War Two to occur.  It is a cautionary warning to those watching to never let it happen again.  Whether we have actually learned this lesson, I shall leave up to you, the reader.

MVT:  Giannini carries the weight of the film on his shoulders, and he does it marvelously.  He glides easily between charming and scummy, proud and ashamed.  He garners sympathy for his plight, even though we know beforehand where he will wind up and most likely what will happen to him (in general) on the way down.  He maintains a strong sense of humanity even when performing inhumane actions.

Make Or Break:  Pasqualino’s trial scene is brilliantly shot and edited.  With not one word of dialogue being spoken, we understand everything that he has done and is about to do.  We see Don Raffaele (Enzo Vitale) at whose request he pleaded insanity.  We see his sisters, now all dyed platinum blonde to attract men in order to make it through the hard times.  We see the young woman, the final piece of innocence about to be lost and the only one present who sheds a tear for the man.  It’s masterful filmmaking and perhaps moreso because you almost don’t realize how unorthodox it is.