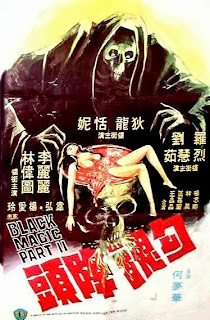 Why have zombies become the go-to monsters in recent pop culture?  Because they’re easy to write?  Because they’re easy to cast?  Because they’re gruesome?  I could believe any of those.  But I think the reason zombies are so relatable to modern audiences is simplicity itself.  They are the ultimate ciphers.  You can read or overlay damn near any and all meanings, themes, etcetera on them that you could ever need.  This gives their stories multiple ways to be read, and makes them appealing to a wider audience than something like, say, werewolves or gill men.  Zombies can be as much about complacency as they can be about disease.  They can be about loss of self or the massing of the downtrodden against the Haves of the world.  They are capitalists and communists, eaters and eroded.  Honestly, their tales almost write themselves (simmer down, you zombie writers out there).  Even when they are used as henchmen in films such as Sugar Hill  or Ho Meng-Hua’s Black Magic 2 (Gou Hun Jiang Tou), they are still a little more than just meat.  They are slaves and vengeance-seekers, victims and henchmen.  Of course, none of this really forgives the tiresome overuse of these creatures of late, but sometimes understanding makes things hurt a little less.  Just a little, though.

Zhongping (Ti Lung) and Cuiling (Tien Ni) are doctors visiting their colleague and friend Zhenshing (Lin Wei-Tu) in Malaysia.  Zhenshing is having problems with maladies he believes are being cause by sorcery and has asked for his friends’ assistance.  Of course, the mainlanders think this is all malarkey, but they are willing to investigate.  Meanwhile, black magician Kang Cong (Lo Lieh) has taken a shine to Zhenshing’s wife Margaret (Lily Li) and quickly sets about putting her under his influence.  Can the yoke of black magic be broken?

Like its predecessor, this film is deeply concerned with perception and the act of looking.  Cong uses his zombies (actually corpses with stolen souls forced into them) to get money from men who are duped into having sex with the reanimated cadavers believing them to be the objects of their affection on who Cong was supposed to have cast a love spell.  Essentially, this turns Lieh’s character into a zombie pimp, and frankly, I would have been more than willing to watch a movie just following that storyline.  When Cong casts love spells on people for real, they can only see their intended lovers as attractive.  To accomplish this, we get a nice bit of visual flair around the edges of the frame, which is actually pretty funny in its Sherwood-Schwartz-ian level of gaudiness.  Everyone else is seen through a similar filter, but they all have boils and so forth on their faces, making them physically repellant.  Later, Zhongping is given something from the good sorcerer of the film which allows him to see the truth.  It is this power, located in his sight, which gives him the advantage he needs to take on Cong.  Cong gives people what they want by forcing others to see things he wants them to see.  When Zhongping is given the ability to “see with his own eyes,” he becomes powerful.

This relates to another facet of the film; the struggle between magic and science, something I find fascinating.  Zhongping and Cuiling, naturally, are skeptical of their buddy’s claims about magic causing illness.  Still, when they see the patients and are allowed to study their afflictions (including the patented worms-crawling-under-the-skin bit), they are forced to change the focus of their views.  They were believers in the science they could quantify, and while they don’t become disbelievers of same, they have to expand their way of seeing the world.  Whether the irrationality presented in the magic they encounter could eventually be explained by science is debatable.  Like Arthur Clarke stated, “Any sufficiently advanced technology is indistinguishable from magic.”  Of course, he also stated in his Three Laws that, “The only way of discovering the limits of the possible is to venture a little way past them into the impossible.”  Not to bastardize or try to twist Clarke’s statements to fit my little movie review too much, but this second declaration amply sums up the predicament of this film’s protagonists better than the first one, in my opinion.

In a slightly indirect way, this also applies to the theme of the rural versus the urban in Black Magic 2.  Malaysia is considered less contemporary than Hong Kong.  Its people are more apt to believe in magic, therefore there are more magicians there, therefore there are more victims of black magic there.  Belief gives power to the supernatural, after all.  Even within Malaysia, however, there is a dichotomy between modernity and rurality.  Cong is a magician who has not only been featured in a book about sorcery (another funny piece of business in the film), but he dresses in a suit and tie when he’s not wearing his ceremonial robes.  His house is fashionable, replete with hidden panels to secret areas.  He hangs out in discotheques (assumedly to pick up johns for his zombie hookers).  Contrast this with the good magician, who wears a loose shirt and sarong.  His hair is poofed out like a wild man’s.  The first time we meet him, he is fishing for a crocodile that ate a village girl (the village is also very rustic, with huts dotted along the river banks).  Aided by his magic, he pulls the reptile in, guts it, and finds the girl’s necklace.  He hands this back to her friends and family.  He knows that bringing her back from the dead is a mistake, but he has given them justice and some form of closure in the form of the meager jewelry.  His character seeks balance in nature for the sake of all, not for personal gain and satisfaction like Cong.

Unlike the first film, this one fits a more traditional (even Western) mold in structure, characters, and approach.  It hews closer to White Zombie than it does to the original Black Magic, in my opinion.  Perhaps this is helped along by its better use of Lo Lieh and his natural magnetism.  His villain is straight forward in his intent, and there aren’t many tangents to kill the pace.  Where its predecessor showed restraint (more than it really should have) in its treatment of the subject matter, Black Magic 2 cuts loose with the crazy a bit more, and it keeps things lively throughout.  It also has a more visually striking aesthetic than the former picture, with a more thoughtful sense of composition and better use of the settings, both staged and natural.  It’s still not a must-see film in my view, but of the two Black Magic films in the Shaw Bros catalog, this is the winner for me.

MVT:  Lo Lieh steals every scene in which he’s featured.  The man has a penchant for cool menace, and even when he’s doing ridiculous things onscreen, you simply cannot take your eyes off of him.  There’s a reason the man is as beloved as he is, and it is readily apparent in this film.

Make Or Break:  The Make is the scene where Frankie Wei takes his inamorata to a hotel and makes love to her.  A clerk, thinking he’s going to catch an eyeful, spies on the two, and as the amulet Wei wears around his neck begins to negate the charm placed on the woman by Cong, we see that he is actually having sex with an animated corpse (portrayed by an elderly lady).  It’s creepy and sleazy and humorous, all at once.