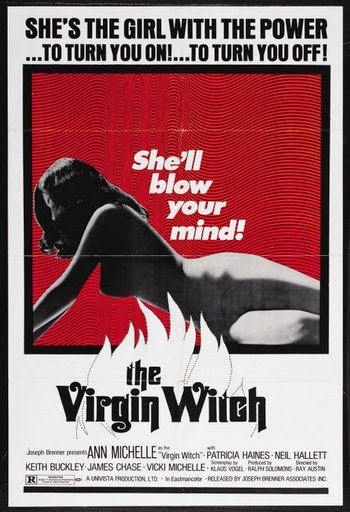 Sisters Christine (Ann Michelle) and Betty (Vicki Michelle) are hitching their way down to London, when they are picked up by the eternally grimacing Johnny (Keith Buckley), who I think has the appropriate surname of Dicks.  Latching onto Betty like the creep that he is, Johnny warns the girls about the predatory nature of many employers.  Heedless of this (or is she?), Christine takes an interview with talent agent and bald-faced lesbian Sybil Waite (Patricia Haines).  Sybil quickly offers Christine a job and whisks the siblings off to the country manse of Dr. Gerald Amberly (Neil Hallett).  What are the odds that everyone around the estate is in a coven with plans for the two young birds?  Better than you might think (unless you actually read the title of the film).

If the tactlessly salacious title and the blunt tagline (“She’ll blow your mind!”) don’t tell you everything you need to know about it, Ray Austin’s Virgin Witch (aka Lesbian Twins) has some of the most telling opening credits, possibly in the world.  I didn’t actually count (I’m horrible at multiplication), but I’m fairly confident that every single still frame used in them has at least one pair of naked breasts in it.  This, in and of itself, isn’t enough to make one think that what they are watching is single-minded (though it does make one hell of an argument).  No, for me at least, this comes from the facial expressions of the women in the credits.  They all appear to be having a right good time, basically glamour shots to kick off a film ostensibly about the supernatural.  So, even with its title and subject, it’s hammered home early that the entirety of this film’s conscious raison d’être is titillation (but as we all know, I’m a killjoy who can rarely enjoy these things only on a surface level).  Unfortunately, by the end credits, I was experiencing niedosyt.

On the skin end of the spectrum, the filmmakers don’t simply throw it up on the screen despite their often brazen approach.  They want the audience to feel like they’re participants and maybe even feel a little sleazy for being so (unless, you know, that’s a turn-on for you).  As Peter (James Chase) takes photos of Christine in various states of undress, the film’s camera acts as a camera shutter, closing and opening an iris (the iris being a visual motif and transitional device going all the way back to the Silent Era of film).  While Gerald watches Betty take a bath through a peephole, a fisheye lens is employed (and frankly, something I’m surprised they didn’t use more of; the lens, not the voyeurism) as he and we ogle.  We get extreme closeups of female mouths talking to each other.  During a scene where Johnny makes a phonecall from Sybil’s office, we get odd-seeming cutaways to various beaver shots around the room (this does pay off, but they are edited with no indication of foreshadowing; something which is both frustrating and refreshing in its jarringness).  Austin’ s camera literally leers over every inch of feminine skin it can, dwelling on nipples and derrieres, as if no one has ever seen them before (maybe the teens who watched the film back in the day didn’t, but I’m pretty sure that these days most kids have seen hardcore porn by the age of five).  It’s Sexploitation, yes, but the intent feels aggressive toward its subjects making for some slight unpleasantness.  Consequently, after the first few onscreen nude bodies, they tend to lose much of their allure, partly because of the tone, partly because of their persistent presence.  It’s a bit like getting used to new wallpaper; after a while, it’s simply background.

I don’t know much about witchcraft (okay, outside of cinematic witchcraft, I know nothing), but Gerald’s coven is, at its core, a kyriarchy with the rituals being about some form of freedom on their surface only.  Nevertheless, the metaphorical sacrifices serve a dual purpose.  On the one hand, they are intended to release the inner sex drive and inculcate new recruits into the group.  This is why there are things like a hidden inner sanctum in the first place.  For the chaste, this is a symbol of their sexual awakening.  There is a value placed on virginity in the coven, though when everything is stripped away (pardon the pun), all of this is simply a way for flabby, old lechers to bang tight, young girls.  This reflects the other purpose of the rituals.  They are, in some sense, a corruption of the virginal (read: pure).  As the ceremony is carried out, the subject is put under a spell, and they cannot completely control their actions or what happens to them (there is some aspect of this that is playacting for the sake of the rite, to be sure).  Though they may have volunteered to join the coven initially, once things get to this point, it can be argued that it becomes tantamount to rape.  This is reinforced immediately after the film’s final rite in a scene between Johnny and Betty which feels disingenuously facile and outright perplexing in its conclusion.

The film is loaded with themes of desire and, much more importantly, jealousy arising from same.  Every single major character (with the possible exception of Betty) is desirous of another one or what they have.  Johnny wants Betty.  Peter wants Christine.  Sybil also wants Christine.  Gerald wants anything he can get.  Sybil is jealous of Gerald, because he has sex with Christine.  She is also jealous of Peter, because Christine is attracted to him.  In her homosexuality, Sybil is somewhat outside the norm of the coven, even though there is no indication that they would be against Sapphic relations.  Sybil is never allowed to consummate with anyone (onscreen; there is the implication that she spent a night with Christine, but it’s also implied that she didn’t from the tentative way she acts the next morning).  Christine, on the other hand, is desirous only for power.  She does not conduct herself as being genuinely attracted to anyone sexually.  If anything, she is a master manipulator, playing the part of the innocent coquette.  Interestingly, this is played out in the relationship between the sisters.  Christine has the power of mind control, and this makes Betty uncomfortable.  Betty avoids her sister’s gaze, but she is still influenced by Christine because she is the younger of the two, and this is the natural order we expect.  Ultimately, Christine uses Betty to get exactly what she wants, and she doesn’t display even the slightest compunction about doing so, making her something of a sociopath.  What’s a real kick in the ass is that what she has been striving for throughout the film doesn’t feel worth the effort in the slightest.  Combined with its total lack of tension, conflict, or emotional involvement, it gives Virgin Witch the distinct air of “who gives a fuck?”  I know I didn’t.

MVT:  The Michelle sisters are charming for what they’re allowed to do.  It also doesn’t hurt that they’re easy on the eye.  But every second they are offscreen is a slog, and the time they are onscreen really isn’t much more of a picnic.

Make Or Break:  The second ceremony is skanky in the extreme, and how it finally plays out is - there’s no other word for it – dumb.