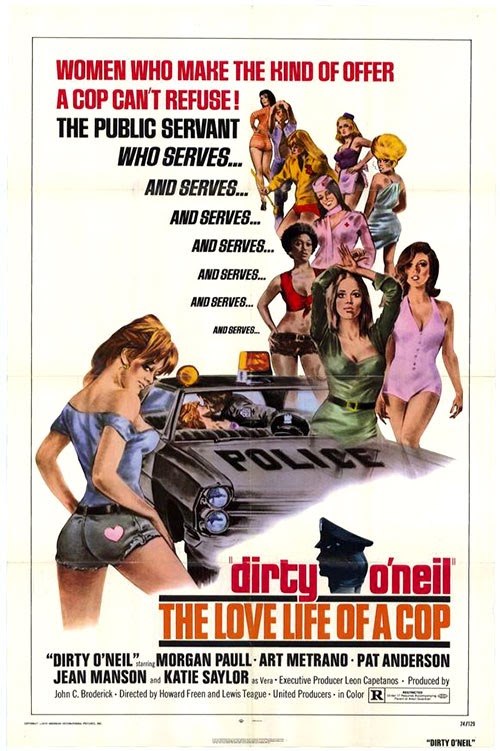 Jimmy O’Neil (Morgan Paull, whom you may recall as the guy who gets blown away by Brion James at the start of Blade Runner) is a fresh-faced police officer in the sleepy California town of Newhall.  Not much happens there, and Jimmy is just fine with that.  This gives him lots of time to score with every single woman he comes across and to passively ignite the libidos of those out of his age range.  His older partner Lasser (Art Metrano), on the other hand, is dying to break out to the big city and some action.  But there is a trio of drifters circling Newhall like a school of sharks, just dying to make things interesting for everyone.

In her notes on Carnival In Flanders, the late, great Pauline Kael wrote that “movies with rough edges and bad spots are sometimes more exciting.”  While I don’t agree with her opinions all of the time, I agree enthusiastically with her in this sentiment.  Of course, I love the meticulousness of more technical filmmakers as well, but I think that verisimilitude can also be found in the more rough-hewn (not always, but sometimes).  Lewis Teague and Leon Capetanos (under the Howard Freen pseudonym) approach the structure of Dirty O’Neil (aka The Love Life Of A Cop) in the sort of freeform way of a Robert Altman film.  Obviously, there are vast differences in directorial styles, but the casual naturalism of most non-sex scenes stands out.  There is no real plot to the film.  There is only a series of events, and the vast majority of these events are in service of the endgame of Jimmy getting laid by a bevy of pretty girls (I’ll overlook the instances of female underarm hair, but if that’s your thing, more power to you).  This is, after all, a Sexploitation film, first and foremost.  But in between the sex scenes are these mini-episodes, and it’s from these the film garners its charm.  The actors have an easy rapport with each other, so even if the audience doesn’t believe the facility with which this guy can pick up chicks, the relationships between the characters is completely believable.  Contrasted with this are the scenes involving the drifters Lou (Raymond O’Keefe), Bennie (Tom Huff), and Al (Bob Potter).  These are despicable villains with the thinnest of characterizations, but their purpose is not solely to provide some sleaze and danger for the film.

It is stated flat out in the film’s dialogue that part of the conflict of the film has to do with the fear of commitment.  This goes a long way in proffering a motivation for all the sex (not that this is especially needed for this genre, but it’s nice that one is given).  Of course, there has to be a sexual hold out in order to make this point, and that is Lisa (Pat Anderson), the nurse who Jimmy chases after, though never to the point that her elusiveness bothers him.  There are, as the film goes to great lengths (ahem) to display, plenty of fish in the sea (or at the absolute minimum, Newhall, California).  When Lisa tells Jimmy that she feels like she can open up to him, he has fallen asleep while she was baring her soul.  She coaches the girls basketball team (the Amazons) that plays against the team Jimmy coaches (the Butternut Kittens).  She describes herself as a “cold fish,” because she doesn’t rip off her clothes when Jimmy shows up, but somehow this is seen as a character flaw rather than as a sign of character, something for which she apologizes.  Nonetheless, this relationship and its complications don’t drive the movie.  They are just another series of vignettes, and their culmination is unsurprising and, I have to admit, a little bit of a letdown, all things considered.  But what can you do?

Beyond the film’s commitment angle (and to my mind running alongside it) is a theme of isolation.  Lasser and Jimmy are the two sides of this coin.  Lasser wants to move to the big city (Los Angeles) and become a cop there.  He wants excitement that Newhall doesn’t offer (“it’s a dull town,” “you’ll get bored, too”).  He wants to be engaged with life.  To that end, he pines for local bartender Vera (Katie Saylor), and he reveals his feelings to her, because he craves a lasting relationship.  After returning from Vietnam, Jimmy wants to retreat from life.  At the film’s start, he enjoys that nothing happens in his town (“you can get killed out there if things get too exciting”).  He enjoys that his sexual liaisons are fast and easy.  He enjoys not being invested in anything other than what’s in front of him at any given moment.  The drifters, then, are the real world from which Jimmy (and by extension everyone) cannot escape.  They mercilessly antagonize him in public, and while they clearly do get under his skin, he doesn’t rise to the bait at first.  If he keeps his head in the sand, eventually they will have to move on.  The drifters also represent what Jimmy may turn into if he remains an outsider to life.  They are the ultimate remove from life and the ultimate personification of ids unchecked, and consequently, they are removed from humanity.  If Jimmy continues down his superficial path, he will become inured to any emotional core he may have once had.  And when the women he nets so easily stop responding to his diminishing allure, like the drifters he will likely resort to taking what he wants.  And it will mean as much to him as it does to them.  Obviously, Jimmy has to confront them in order to confront this part of himself, and once he recognizes this, he suddenly begins taking his job more seriously.  With that said, the film makes something of a misstep (hint: it’s the same scene referred to above with Lisa), because after what Jimmy has gone through, we are left with the distinct impression that he only did it in order to continue getting his nuts off.  This is nailed (no pun intended) with the repeated piece of dialogue, “A cop is usually overworked, underpaid, and misunderstood.  But he should never be horny.”  After the trouble the filmmakers took to give the film a streak of seriousness (and the shifts of tone work reasonably well, all things being equal), it comes off as fairly crass.  I’m sure the filmmakers went this way so they could have an “up” ending, but it rings slightly false to my ears.

MVT:  The acting is solid from just about everyone.  Granted, there are a few amateurs who don’t rein it in as much as they should.  But I have to say, overall I was impressed.

Make Or Break:  The scene with the Drifters and a certain woman is an extended exercise in sleaze.  It also manages to be gripping and hateful simultaneously, and it shockingly doesn’t go for titillation, which I appreciated.