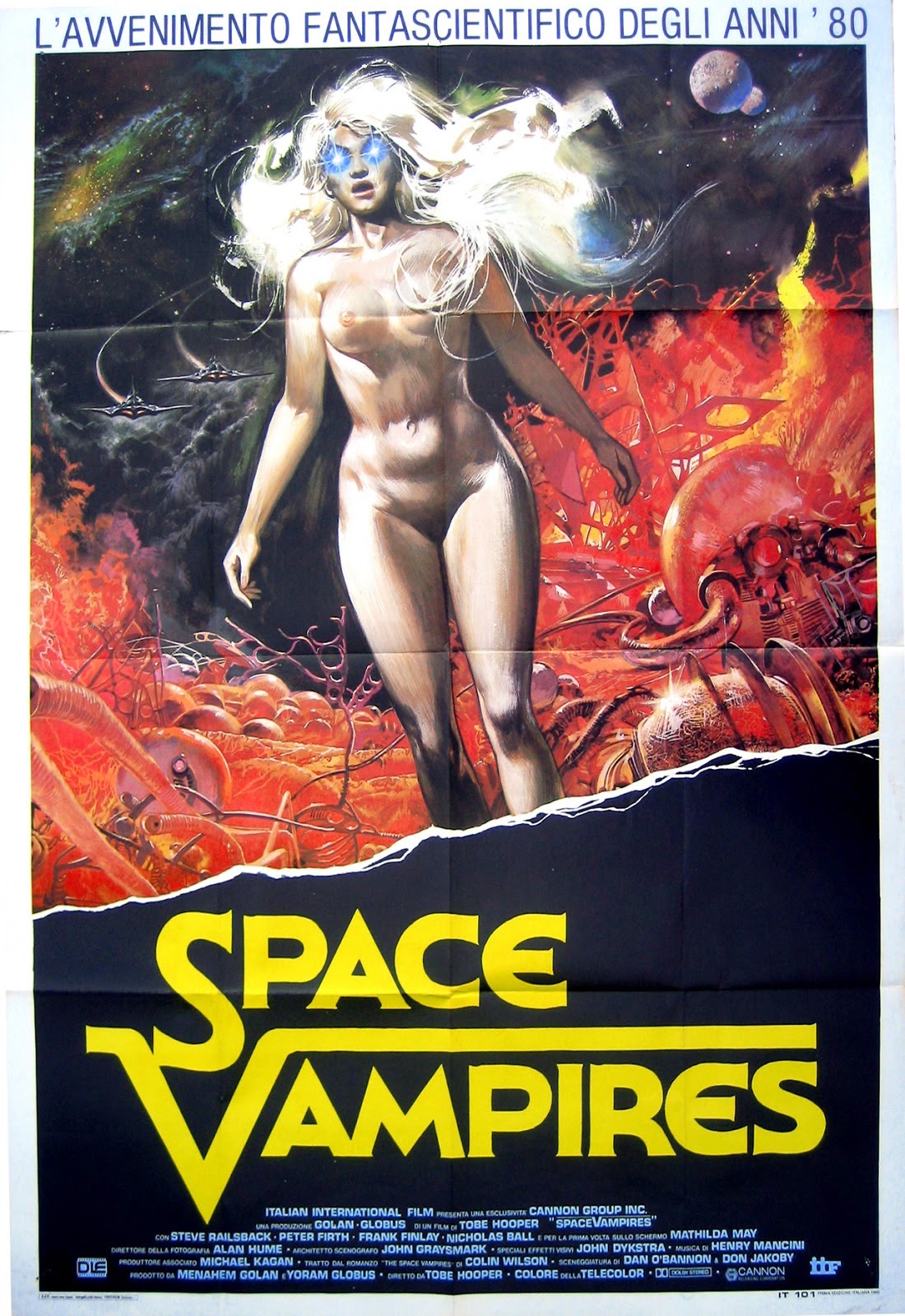 I can honestly remember a time when vampires scared me.  Christopher Lee’s intense portrayal of Dracula in the Hammer films hit me like a ton of bricks.  I watched in queasy astonishment as the upraised, juicy, blood-tinged bite marks of his victims were unveiled on screen.  Even while watching such films on Creature Double Feature in the bright light of a Saturday afternoon (okay, in a darkened basement; work with me here), my skin crawled.  After watching Tobe Hooper’s adaptation of Stephen King’s Salem’s Lot, I slept with the covers pulled up right to my chin (because, y’know, vampires are incapable of pulling covers down to get at the warm, succulent necks of chubby Horror fans).  While there has always been a sexual component to most neck-biter works, they rarely failed to be frightening as well.  Vampires are, after all, monsters.  They prey on the living.  Their whole world view is bathed in blood.  Over time, the sensual angle came more and more to the forefront, as did the emphasis on their superhuman abilities.  Vampires have gone from being twisted bastardizations of humanity, lurking around fog-shrouded graveyards and raining death down upon their victims to angst-ridden, love-struck superheroes, who you wouldn’t mind tipping back a drink with if they just so happened to drink…wine (or whatever their non-sanguinary tipple preference would be).  I’m not going to point to any one example or franchise as being the turning point in this regard, because things like this are usually a progression of events rather than spontaneous occurrences.  And there are vampire stories today that keep the creatures’ ghoulish origins close to their hearts, to be fair.  It’s just that the balance of power (so to speak) has shifted.  Here’s to hoping it shifts back before the day I die.

While investigating Halley’s Comet up close, the crew of the S.S. Churchill discovers a large spaceship hidden in its tail.  Inside the ship are crystal sarcophagi containing two handsome young males (Chris Jagger and Bill Malin) and one astounding young female (Mathilda May), all very naked (and some bat things, but we all know what the astronauts would rather investigate).  When the space shuttle is eventually found burnt out in Earth’s orbit like an interstellar Demeter, the crystals and their contents are brought back to the European Space Research Centre.  And Hell is soon unleashed upon the planet.

Hooper’s Lifeforce is a mash-up of genres, in much the same way that its clearest predecessor, Mario Bava’s Planet of the Vampires is.  They both involve creatures which have the attributes of classic vampiric legends but with Science Fiction trappings.  Both also attempt to come up with a reason why vampires were ever “invented” as boogeymen on our planet.  I’m a sucker for Cosmic Horror of this variety, though I think that Lifeforce leans more toward the Cosmic side than the Horror side.  It also ramps up the sexuality angle, making this one something of a triple threat.  May’s Space Girl spends a large portion of her screen time in the buff, and it is her relationship with Steve Railsback’s Colonel Carlsen that is the prime driving force for the plot.  In an odd way, you could look at this as a reversal of the traditional Dracula/Mina Harker seduction trope.  It’s not quite as clean-cut as that, but we’ll come back to that issue later.  Carlsen has nightmares where he has sex with the Space Girl (what torture).  Her first words in the film are “use my body,” and she then proceeds to suck a man dry via liplock (not of blood, though; see the film’s title for further reference).  Carlsen behaves as if he doesn’t want anything to do with her, even though his first contact with her left him “invigorated.”  After Carlsen has a psychic vision of the Space Girl (in another woman’s body now) seducing a middle-aged man, he behaves like he’s jealous.  Their story is a romantic chase (boy meets girl, boy loses girl, girl gets boy), though for as much as they want to come together, they don’t want to come together.  The Space Girl beckons him to her, though their consummation can only end in either total victory or total destruction.

There are other sexual aspects to the film other than this gender reversal.  The spaceship that houses the space vampires is shaped vaguely like a penis.  Its interior (which is likened to the inside of an artery) is also reminiscent of a vaginal canal.  The entry to where the crystals are kept opens accompanied by blinding light, revelatory in its connotations as the “promised land” in sexual terms (as well as a signpost to ultimate knowledge).  When Carlsen enters it, the camera is turned upside down, the same as his world and his perspective on it are about to be.  After an encounter between Dr. Bukovsky (Michael Gothard) and the Space Girl, he describes her as “the most overwhelming [sexual] feminine presence.”  This intensity of female sexuality is horrifying to (most) males.  The male vampires, by contrast, don’t appear to have the same powers of seduction.  They are more blunt instruments, knocking stuff around as if with their bare penises (which are never shown on screen in case you were wondering).  More interesting, these monsters pass on their vampirism to the humans that they kill, and this evokes notions of sexually transmitted diseases, specifically HIV/AIDS, in how this is displayed visually.  They becomes husks, wasted away.  When the human victims come back to life, they, of course, seek out the lifeforce of others.  If they cannot get it, they dry up, rot out, and eventually explode in a cloud of biological desiccation.  Unfortunately, this element is treated as little more than a “zombie apocalypse” device in the film.

Which brings me to the problems I have with the film.  Being an adaptation of a novel (The Space Vampires by Colin Wilson), you can expect a certain amount of either streamlining or sprawling in terms of the plot.  With the former, you stand the chance of losing some of the more intriguing elements.  With the latter, you stand the chance of losing focus entirely.  And unfortunately, that is the case here.  There is a ton of exposition running through this film, and it is delivered by men basically standing around the Space Research Centre, observing some admittedly engaging events unfolding right in front of them.  We could probably call this the Kaiju Expositional Device (or KED), since it’s a common complaint of films involving giant, Japan-crushing monsters.  Railsback does the film no favors, since his usual “smolder/explode” method of acting is on full display, and rather than conveying the conflict within his character’s mind, he simply comes off as overwrought and cranky.  The logic gaps in the plotting refuse to be sewn up, no matter how much you stretch your thinking to make the ends meet.  The majority of characters outside of Carlsen and the Space Girl (including Peter Firth’s Colonel Caine, who serves no purpose other than as an authority figure by which Carlsen can access certain British government facilities; a role which could easily have been written around or out) mean little to nothing in the grand scheme of things.  The script leaps around, playing out the same scene using the same beats ending the same way just so it can be repeated again until it all comes full circle (and a rather small circle, at that).  Most disappointing, though, is that the siege of London is little more than a set of minor obstacles to drag the runtime out a bit further.  It’s almost an afterthought rather than a planned set piece.  Lifeforce is a mess of a film.  In its desire to achieve an epic sense of scope (evidenced right off the bat by Henry Mancini’s bombastic, symphonic score), it loses sight of its story in a forest of details it doesn’t take the time to flesh out satisfactorily.  Despite its good looks and infrequent moments of enjoyableness, it is a fairly dull, dry affair.  A bit like the prey of the space vampires.

MVT:  The level of production value and the special effects work are very impressive.  No surprise since John Dykstra was involved.  If nothing else, between the effects and the striking beauty of Ms. May, the film is never ugly to behold.

Make or Break:  The scene involving one Patrick Stewart is one step beyond ridiculous in a film loaded with ridiculous scenes.  I actually verbalized the sympathy I had for the actors while watching it unfold.