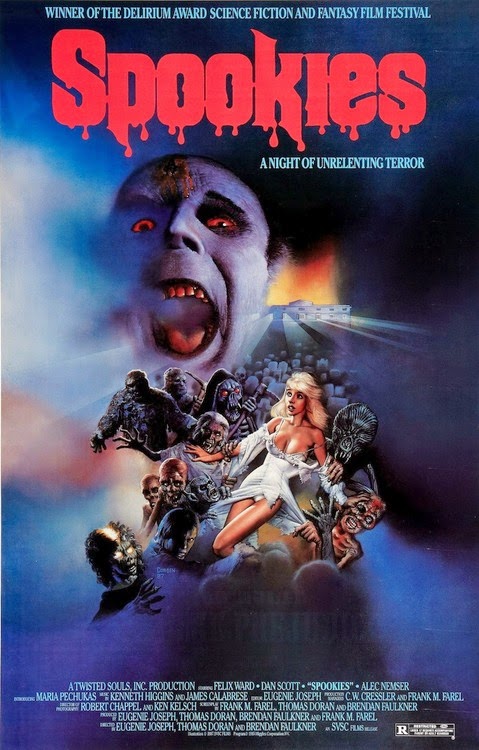 For the longest time, I thought Richard Corben was European (most likely French, but throw a dart, you know?).  The reason for this was twofold.  One, I had become familiar with his work like Den in the pages of Heavy Metal, a comic magazine which mixed sex and blood and sex and Science Fiction and sex and Noir and sex and Horror in a more unfettered fashion than was produced in America in the pages of books like Creepy or Nightmare.  The magazine was loaded with work by Europeans such as Moebius, Guido Crepax, and Milo Manara, making it more guilt by association than anything else in this regard.  Corben’s style was also unlike anything a kid raised on the likes of John Byrne or Jose Luis Garcia Lopez would be used to.  His figures very often had thick, bold outlines, and their features were often exaggerated.  Yet, his shading and detail work was smooth and realistic.  You could never be sure if his finished work was done in ink or pencil or a combination of the two (my understanding is that he uses models that he makes as reference for his art).  His art is deceptively simple-looking, a wildly successful mashup of “bigfoot” and “photorealistic” cartooning.

This dichotomy is present in the poster art Corben produced for Eugenie Joseph’s (and Thomas Doran & Brendan Faulkner’s) Spookies.  The large image of villainous Kreon’s (Felix Ward) head is startlingly lifelike, while the figure of Isabelle (Maria Pechukas) is pure pulp comic book splendor.  So imagine my shock and awe when I discovered that Richard Corben was about as European as Benjamin Franklin, hailing from Missouri of all places.  The man, now in his seventies, is still working, with a miniseries titled Rat God due out this year.  The point of it all is that, if you’re given the opportunity between watching Spookies or staring at the poster art for ninety minutes, choose the latter.  That way, at least you won’t be disappointed.

In the backyard boneyard of a decrepit estate (I assume off Long Island) lies a tomb with a chained, breathing gravestone.  Beneath this,  Kreon fritters about, fawning over youthful bride Isabelle, counting off the seconds until they are reunited in eternal life.  Meanwhile, his catman-pirate-cowboy-servant-thing (Dan Scott) prowls around the grounds, preying on unsuspecting dolts like little Billy (Alec Nemser) who has run away from home because his parents forgot his birthday.  Enter two cars full of jerks, led by pleather-clad imbecile Duke (Nick Gionta) who just so happen to come upon Kreon’s old abode.  Needless to say, they enter against all logic, all hell breaks loose, et cetera, et cetera.

Without getting too involved in the behind the scenes story, Spookies actually began life as Twisted Souls under the guidance of Doran and Faulkner.  Theirs are the more wild, monster mash scenes and the narrative involving Duke, his improbable pal Peter (Peter Dain, who looks like he should be playing Duke’s father), and the rest of the partygoers’ misadventures in the house.  The film was taken from the duo and given to Joseph, who added the Kreon plot and all that entails.  You can read more about it here: https://thedissolve.com/features/oral-history/788-the-strange-saga-of-spookies/.

I’m unsure what the producer thought he was doing by handing the film over, not from a dollars and cents angle, but from a common sense angle.  The scenes with Duke and company are grating, especially when anyone tries to act (and most especially when amateur puppet comic Rich [Peter Iasillo Jr] tries to be funny), but it’s no more formulaic or nonsensical than any bargain bin Slasher film.  The characters get split up and encounter gruesome ends.  What Doran and Faulkner do right is keep things lively with the variety of fiends.  There are Muck Men (who menace and fart simultaneously), a Grim Reaper statue that comes to life, snake-oid creatures that resemble the old Stretch Monster toy I had as a kid, and so forth.  The scenes inserted by Joseph not only don’t mesh well with the other footage (they are a bit more mean-spirited and skincrawling in tone), but they also serve to confuse the whole affair rather than providing a throughline on which to hang the disparate monster attacks.  Add to that the fact that the Kreon/Isabelle story gets dropped for stretches, making it stand out like the proverbial sore thumb whenever it’s rejoined.  Further, the Kreon/Isabelle plot has no seeming structure, so whenever it is cut to, you’re never quite sure what is supposed to be going on, why, or how much of a difference any of this makes (and that last part is its ultimate downfall, since the answer continuously comes back a resounding “none”).

The one interesting thing that the Kreon facet brings up is ideas about eternity and decay.  Kreon has kept Isabelle in the crypt for at least seventy years (that we’re told of), but whereas she has remained young and beautiful, Kreon is middle-aged and hideous.  His skin is a pasty blue-grey and a large vein pulsates in the middle of his head (I have something similar over my temples that throb when I get irritated).  The questions arise, has Kreon remained in this state since Isabelle went to sleep?  Was he once youthful and attractive like her, or was he always repulsive?  Nonetheless, if Kreon was never young, why did Isabelle marry him and have a son by him (A. J. Lowenthal), and if she did voluntarily wed Kreon and spawn his scion, why does she reject him so thoroughly and immediately when she awakens?  Also, if she saw her son before dying/whatever, did she not notice that he was monstrous in appearance?  Is that why she wound up in a coffin for seven decades in the first place?  There’s no real answer in the narrative, so the audience is left to construct its own history, but rather than giving a viewer something to mull over, to grow in their own mind, all of this only serves to confound and irritate.  What is even more dumbfounding is why something so incongruous from the entire rest of the film was allowed to be shot and then be shoehorned in.  I can understand wanting a return on investment, but what could the filmmakers have been thinking to put this out in its present state?  Did they expect no one to pick up on its sloppiness?  The more I think on it, the more I go from just being ambivalent on Spookies to actively disliking it.

MVT:  The monster effects are fun, in an amateur funhouse kind of way.  They make for some interesting visuals, so credit where it’s due on that.

Make or Break:  Any scene featuring Duke is guaranteed to either have you throwing things at your television or attempting to drown yourself in spaghetti sauce.  He’s that galling.