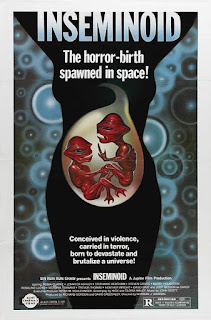 Some random thoughts/quandaries/gripes for you today.  Why is there never a poster or picture frame manufactured in the size that I need (you would think they would understand that some prints are not  “standard” size; of course, this also helps keep framers in business, but still…)?  Why does Hollywood keep insisting on using CG for absolutely everything, even though it certainly hasn’t driven production costs down and nine-out-of-ten times looks like garbage?  Are “goth” kids the new preppies?  I am horrible at choosing gifts for people.  Horrible.  The reason I don’t have my dream job is because I have too many things I love, none of which I have ever successfully monetized (you’re reading one of them now).  I wonder what will happen to my collection of comics and magazines after I’m dead?  Would they even be worth the price of the paper they’re printed on?  Why couldn’t I have been born rich instead of so good-looking?  Why do people think that walking directly out in front of my car will make it instantly stop?  As a side note, are there more people out there with bodies as dense and tough as steel than I thought?  Are Wal-Marts nexuses of surreal freakishness which are slowly expanding outward in concentric circles, like a rock chucked into a sea of primordial soup (that some jerk dipped his nuts in)?  Why do people enjoy watching “reality shows” that have the same exact “story” and the same exact interactions every single week (and this is coming from someone who has a close relationship with formulaic storytelling)?

Why all this scattershot navel-gazing in this week’s intro?  Well, because Norman J Warren’s Inseminoid (aka Horror Planet) is a film loaded to the gills with random idiocy.  To wit: Dean (Dominic Jephcott) picks up some weird crystals by hand without using tongs or anything.  The love scene between Mark (Robin Clarke) and Sandy (Judy Geeson) involves them getting naked and hugging while standing upright.  Documentation Officer, Kate (Stephanie Beacham) interviews various crew members like she were a cub reporter (microcassette recorder and all).  She also has no compunction about killing her colleagues when it’s deemed necessary and then kicking back in her underwear while listening to her jams (maybe it’s whale songs or somesuch; who knows?) on her large earphones.  The most expedient way to deal with the major problem at hand is determined to be killing Sandy with explosives.  Doctor Karl (Barrie Houghton) doesn’t want to kill Sandy because she’s pregnant (something about which Mark seemingly has no opinion whatsoever, even though he has no clue whether he’s the father or not).  The crew watches Gail (Rosalind Lloyd) kill herself by opening up her space suit helmet and trying to saw off her leg rather than any of them donning a suit and going out to, you know, help her or something.  Holly (Jennifer Ashley) wields the intimidating “touch burner” (basically a tack welder… in space!) right next to Karl’s head as he wrestles with Sandy (surely, nothing could go wrong here).  You can accuse this film of being dumb (and, let’s face it, it is), but it’s dumb in such arbitrary ways, it creates a certain charm that makes it enjoyable.

The idea of monstrous impregnation rears its head in Inseminoid, and while this is a wholly unoriginal idea (see The Beast Within, Rosemary’s Baby, Demon Seed, ad nauseum), it clearly comes directly from Alien’s face hugger concept.  It does, however, have a couple of twists to it that make it seem a little fresher than it actually may be.  The impregnation process is both creepy and clinical in its depiction.  Sandy is strapped naked to a glowing (metal?) disco table.  The alien inserts his (glass?) penis-thing into her, and we watch as its eggs flow down the tube and into Sandy.  This plays simultaneously on the fear of rape and the fear of medical procedures, which are equivocated here as being invasive and assaultive.  Further, this pregnancy changes Sandy fundamentally, something that many films utilizing this plot point don’t do (they usually deal more with the human angle of the mother dealing melodramatically with the tragic circumstances in which she finds herself, and in Ridley Scott’s film, Kane [John Hurt] doesn’t even know something is wrong until it suddenly, violently, is).  She goes from being a mild-mannered non-entity (in a film whose every character is a non-entity) to a murderous, ghoulish non-entity (she eats a victim to feed her babies).  This riffs on some of the old wives’ tales that revolve around pregnancy, as well as amplifying some of the actualities.  For example, the changes in hormones that come with being pregnant can cause mood swings and/or odd cravings (entrails, for example).  Likewise, there is the myth that female infants steal their mother’s looks (Geeson distorts her face and gurns constantly, and her bulging green eyes are heavily emphasized).  These changes to Sandy can also be viewed as the intensification of a mother’s protective instincts toward her unborn children as well as phobias about the “other” growing in her womb.  Sure, she goes crazy and starts killing off cast members all willy-nilly, but she does it to keep her spawn safe while being equally terrified of what’s transpiring to her body.

One intriguing aspect of the film which is almost entirely abandoned after being initially brought up is the idea of twins and myths.  The space crew are archaeologists excavating an alien planet, and some of the space hieroglyphics discovered tell, according to linguist (?) Mitch (Trevor Thomas), of mythical twins who once ruled the planet.  It’s postulated that this fixation may have come from the planet’s dual suns.  It’s also speculated that the planet’s previous inhabitants were self-destructive (of course, this is solely put out there to play into the film’s horror narrative).  But the idea of twins goes totally unexplored, until the twin aliens are born in the film’s third act (you can view their conception as occurring between a god and a mortal, a scenario with which mythology is rife).  There is no depth given to what could have been a complex (without being complicated) concept of duality.  These two are not Romulus and Remus.  They are not Cassandra and Helenus.  Hell, they’re not even Tomax and Xamot.  Inseminoid’s xeno-babies are strictly used like the infants from the It’s Alive series (and please don’t ever confuse the Larry Cohen film with the identically-titled Larry Buchanan film in that regard, because they are worlds apart), but even in the latter movies the creatures had a modicum of personality.  Sandy’s children are gruesome, vicious hand puppets that are in the film for exactly three reasons.  One, they embody the fears of motherhood.  Two, they give the film an un-shocking “shock” ending.  And three, they raise the body count by a couple of corpses.  In a film which is simple to the point of being simplistic, you really can’t expect much more, though, can you?

MVT:  Inseminoid has a sleazy, eerie atmosphere about it that augments its bleak outlook.  It also looks damned slick for a film made on a shoestring.

Make or Break:  As obvious (and mayhap just a bit crass) as it may be to name it, the Make on this one is the alien rape/impregnation scene.  It’s visually striking while still being pretty freaky in its own right.