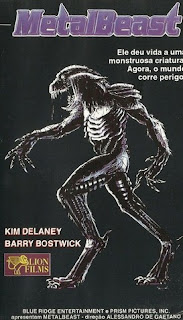 At the heart of all the great werewolf stories is the tragedy of the lycanthrope’s condition.  Usually, these characters didn’t ask for what’s happening to them (in fact, Oliver Reed’s character in The Curse of the Werewolf is just that; cursed by happenstance of birth).  Oftentimes, they are wracked with angst prior to their “infection”/transformation, and their lycanthropy amplifies this, creates a visual metaphor for dealing with it, and generates pathos which makes their typically tragic endings more impactful.  We feel bad when Lon Chaney, Jr is killed with almost Shakespearean poignancy in 1941’s The Wolf Man, because he’s basically a nice guy.  We feel bad when Dee Wallace sacrifices herself at the end of The Howling, because after all she’s gone through, we want her to live, but we know that she has to die.  Even villainous werewolves who are not the protagonists of their stories normally embody a certain sense of anxiety centered on their duality.  Just look at Everett McGill’s character in Silver Bullet who has nightmares about his loss of morality/control.  All of this is rooted in the injustice of these people’s situations.  They don’t generally deserve their lot in life (hey, who does?), so we sympathize with what they’re going through.  However, in Alessandro De Gaetano’s Project: Metalbeast, Butler (John Marzilli) was an unsympathetic piece of shit even before his self-inflicted transformation.  Consequently, his werewolf is nothing more than a lumbering beast we don’t care about as anything other than a killing machine, and I think it robs the film of the resonance it could have had.  Of course, none of the other characters are all that compelling either, so I suppose there’s some sense of balance in that.

After injecting himself with werewolf blood obtained in Budapest for a top secret super soldier project, Butler, a soldier working under the shifty Colonel Miller (Barry Bostwick), wolfs out, is put down with three silver bullets, and is placed into a cryogenic deep freeze.  Twenty years on, his cadaver is thawed out to test Dr. Anna De Carlo’s (Kim Delaney) unstable artificial skin, called Bio-Ferron (just to reinforce this for you, they have an artificial epidermis that has the UNINTENDED side effect of turning into metal, and they called it Bio-Ferron), under the orders of the still-shifty Miller.  I wonder if Butler will awaken and go on some kind of rampage?

One of the more interesting things at play in this film is its combination of science with myth.  In the same way that some science fiction fantasy stories (a la Karl Edward Wagner’s Kane stories or Thundarr the Barbarian) merge grungy, bloody barbarianism with high tech, almost aseptic futurism, the dichotomy of juxtaposing science with the supernatural holds a certain appeal for me.  It’s the incongruities of the two, the core polarities that I find fascinating.  There is some de-mythologizing of lycanthropy in the film as the condition of werewolfism is treated as a rare blood condition rather than as a curse or disease passed from one victim to the next (even the military wouldn’t be foolish enough to purposely infect soldiers whose combat efficiency they wish to enhance with a known malady [or would they?], although this does call to mind the shameful Tuskegee Study [which took place over a span of forty years!]).  Werewolves are simply something that exist (and that they do so in secret bolsters the conflict between comprehension and the incomprehensible).  Yet, the filmmakers don’t deal with any of this in anything other than a superficial manner.  The elements are all there, but De Gaetano seems to be more intent on making a straight up creature feature (not that there’s anything wrong with that) than on exploring the depths of the sandbox in which he was playing.

There is also some toying with notions of morality, but even here, it’s essentially cursory.  Naturally, Miller has no moral or ethical code whatsoever (“morality has nothing to do with it”), because he’s both a government employee for an unnamed, clandestine branch as well as a soldier, and we know that these two things spell mercenary in cinematic terms.  The doctors (who are also government employees) are innately moral, because their stated purpose is to help cancer and burn victims and they work out in the open (more or less).  They want to heal people, whereas Miller wants to hurt people.  Even the soldier Philip (Dean Scofield) who works with the doctors is himself a doctor, so he shares their clear moral code, and General Hammond (William G Clark) is upfront about his distaste for the likes of Miller (“people in Washington have no regard for humanity”).  The doctors also hang out, drink beers, and play poker in their off hours, so the audience recognizes that these are regular folks just like them.  Despite all this, the doctors don’t display the courage of their convictions.  They raise token ethical/moral arguments, but they go along with Miller’s plan with little prodding, and then everything is business as usual for them.  Even after Butler comes back to life, they have very little compassion for the guy (granted, he doesn’t deserve it, but they don’t know that) outside of the frustration of snapping off needles while trying to give him injections.

Nevertheless, when Project: Metalbeast is all boiled down, it’s by the numbers right down the line.  The characters are indistinguishable from one another and undeveloped outside of their designation as “the good guys.”  The same goes for Miller, who is a cardboard evildoer, always turning up to overhear some suspicious dialogue and deliver some vaguely menacing lines of his own.  The Metalbeast (played in costume by Kane Hodder) is a chunky, blank slate of a monster that looks more like a mutant hedgehog than an iron werewolf.  There are no unforeseen twists to the story.  There are no especially clever moments for any of the characters in their combatting of the monster.

And speaking of the lack of cleverness, the film is rife with just dumb moments and decisions.  To wit: why does Miller suddenly think that Butler will obey him now simply because twenty years have gone by?  Why does he have no method to control what is basically a feral animal (it’s declared that the amalgamated soldier would have the brain of a man, but this is not in evidence anywhere) which he wants to use it in combat.  Why is Miller not armed to the teeth with silver bullets or have any underlings with him similarly kitted out?  Why does Miller show Butler photos of the initial werewolf eating Butler’s fellow soldier in Budapest, when Butler clearly didn’t give a fuck about that guy in the first place (and why is this so effective on Butler, then?)?  Why do they seem to keep Butler’s frozen corpse in the kitchen refrigerator?  Why does Chef Ramon (Mario Burgos) get third billing in the end credits (they’re only partially in alphabetical order) after a single, histrionic scene (which, by the way, wins the Robert Marius Award for the film)?  Even discounting any of this (or reveling in it, for that matter), the film watching experience with this one was basic in every aspect for me, not in an old school, throwback sort of way but in an ultra-generic one.  It was just nothing to howl about (and by the way, the Metalbeast never howls in the film).

Make or Break:  The Budapest werewolf attack has another practical suit monster, which I quite liked, and it was gory (I should state, there’s quite a bit of gore in the film that provides a tiny amount of satisfaction).  And that’s that.