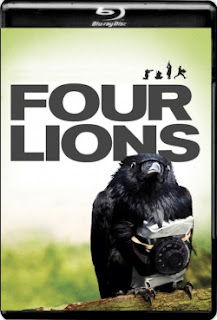 This movie is a biting satire of Islamic extremism and human stupidity. Written and directed by Chris Morris who has also written The Day Today,  Brass Eye, and episodes of Veep. The Day Today and The Brass Eye were satirical takes of the media with no care given to how badly they made fun of them or what subject matter they choose to satirize. The best example of this was the Drugs episode of Brass Eye, the show claimed there was an Eastern European drug called "Cake". "Cake" affects the Shatner's Bassoon region of the brain and slowed the users perception of time. It also was claimed to cause water retention in the neck. Now they asked David Amess, a Conservative member of parliament, to film a PSA about the evils of "Cake". He was so taken in by the joke that he asked the government if they knew what it was and had they banned it yet. This is the level of satire Chris Morris brings to his work.

The tone of this movie is set with the opening scene of the character Waj filming his martyr video with a small toy AK-47 and a camera with low battery life. Instead of recording his last message, he is busy arguing with the other members in terrorist cell on the best way to make the toy look like the real thing. This is one of many videos that Omar, leader of the cell, is trying to edit in some way that does not make their group look like a collection of morons. Like Faisal, who refuses to be filmed unless he is wearing a box over his head. Or Barry, a recent convert to Islam and thinks ingesting sim cards is a brilliant way to avoid authorities listening in or tracking them on their cell phones.

The cell's problems start when Omar and Waj go to Pakistan for terrorist training and direction as to what their target will be. Their training doesn't even start when Waj takes a real AK-47 and uses his cell phone to take a video of himself firing it. This pisses off the people running the camp and Omar and Waj will be sent back to England without the training or guidance. Ensuring that the situation is made worse, Omar spots a drone and gets the bright idea to shoot it out of the sky with a rocket launcher. This dumb idea is made worse by the fact Omar has never used that weapon and is holding it backwards. So instead of missing the drone he hit another near by training camp. Omar and Waj get the hell out of Pakistan and get back to England as quickly as humanly possible. Instead of cutting their losses the group just doubles down on the stupidity.

This movie does a great job of showing four flawed people who are all for killing themselves in the name of God. Collectively the four of them can't agree on why they are dying or where they should attack but they all ready to be welcomed into paradise. No one in this film is the cunning evil terrorist, the ultra innocent bystanders, or officer Amazing Slab Chunkhead. It is a movie universe full of people with absurd ideas with an absurd and satirical slant. It is dark, unapologetic, funny, and unafraid to call everyone an idiot. If you like what you have read so far go out and watch this movie. You will not be disappointed.

MVT: The Cast and the writing are the reason this movie is funny as it is.

Make or Break: This is filmed as cable news feature showing the lead up to an event. So a lot of the footage is from closed circuit tv, news footage, cell phone footage, and documentary like footage. It was jarring getting used to the way this movie is put together.