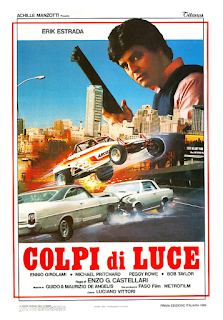 When CHiPs originally aired (from 1977 to 1983), it was clear early on that co-star Erik Estrada was the lynchpin around which this televisual universe spun.  His Frank “Ponch” Poncherello was a swaggering ladies’ man who was adept at his job but also wasn’t above being taken down a peg when he acted like an ass (which was at least once per episode).  Contrasted against his straitlaced (nay, torpid) partner, Jon Baker (Larry Wilcox), it’s little wonder why Estrada garnered the majority of the popularity from the show.  He had charisma and looks (including a smile usually reserved only for grade school class photos), and sometimes that’s enough.  Of course, part of CHiPs’ fame also rested on the fact that it showcased some truly beautiful ladies being beautiful in tight uniforms, like Randi Oakes and Brianne Leary, and sometimes that’s enough, too.  Add to this the comedic relief stylings of Grossman (Paul Linke) and Harlan Arliss (Lou Wagner), and you get a recipe for success.  But television series don’t last forever, and Estrada rode his popularity as far as he could, appearing in a slew of direct-to-video films that varied in quality from middling to piss-poor.  He also gave a great turn as Marco Rodrigo Diaz de Vivar Diego Garcia Marquez on the animated Sealab 2021, prominently displaying his funny bone (though honestly, the show was only good up until the fantastic Harry Goz passed away, in my opinion).  So, where does Enzo G. Castellari’s Light Blast (aka Colpi Di Luce aka Neonkiller), a film which I believe actually had a theatrical release (but I’m not one hundred percent on that) fit on the Estrada spectrum?  I’d say it sits at the higher end of the curve, but it’s still not very good, and I believe that Estrada himself has very little to do with its quality, regardless.

A randy couple are melted (in imitation of the Nazis being melted at the climax of Raiders of the Lost Ark) during Yuri Svoboda’s (Ennio Girolami) testing of his new light-based superweapon.  Cut to: Detective Ron Warren (Estrada) taking out a couple of bank robbers wearing nothing but his gotchies and a turkey (with fries on the side).  Ron and his partner, Curtis Swann (Michael Pritchard, in the Jon Baker/Grossman role), are assigned to track down Yuri and his goons after the physicist (NOT a physician as stated on IMDb) threatens to destroy San Francisco if he’s not paid five million dollars (and then ten million, and then twenty million).

Light Blast is very much a conservative film in how it views the world, particularly with regards to the criminal element.  This is underscored in the sequence of Ron’s introduction.  The bank robbers are filthy scumbags, cackling with glee at their vicious misdeeds.  They even shoot a hostage in the back a few times just for kicks (and to make the audience detest them all the more).  An older woman watching this goes positively bloodthirsty, demanding that the cops murder the bad guys outright.  Naturally, Ron is happy to oblige, taking out the robbers and stating, “It’s maggots like you that make me like my job.”  Crime is not to be tolerated, and its perpetrators cannot be allowed to live (one has to wonder how Ron would deal with, say, a jaywalker?).  This is a black and white world, populated with black and white characters.  The film this most resembles in this respect (or at least the one I kept referencing in my mind) is Cobra which opens in a similar fashion (and to be fair, a great many films of this ilk contain prologue/hero intro scenes in this vein), but was released the following year.  Could it be that for once the Italian film industry were leaders rather than copycats?  Well, no, not really, since Light Blast’s attitude towards criminals is an extension of films like the Death Wish and Dirty Harry franchises, and certainly there were other films in between with a similar outlook (typically with a vigilante hero rather than a cop, but the two quickly intermingled and became a third thing), but the Light Blast/Cobra comparison really sticks out to me.

Further to this is the idea that Ron is a man for whom his job is his life (killing’s his business, and business is fine).  Sure, we’re given a few token scenes of “domestic” life with his girlfriend Jack (Peggy Rowe), but they are totally joyless.  There is absolutely no chemistry between these two characters, and Jack is essentially an expositional tool and a motive for vengeance only.  In the middle of a miserable dinner, Jack races to the phone when it rings and then jets out when work comes a-calling.  He gets more excited investigating a crime scene than he does spending time with his lady friend.  Ron is so myopically intent on taking out bad guys, he neither blinks nor shows any sense of loss when his colleagues are killed or hurt (actually, he is further encouraged to go on the warpath by a wounded co-worker [“get those son of a bitches”]; Ron’s sensibility is the only correct one).  He doesn’t hesitate to pull the trigger on an adversary.  He has no compunction about using innocent bystanders to aid him in tailing one of Yuri’s henchmen rather than using the skills we assume he should possess as a police officer.  He is a sociopath, a characteristic remarked upon explicitly by Yuri, who claims that he admires Ron’s “cold efficiency.”  And that’s coming from a guy who liquefies human beings for a living.

This brings us to the character of Yuri himself, an equally forbidding character and the one interesting concept in the film.  Yuri is a pure comic book supervillain.  He employs a super-science weapon to hold power over the masses (the fact that it only affects people in proximity to liquid crystal display time pieces is a flaw, to be sure).  He has numerous henchmen, a notion I’ve always simultaneously loved and questioned, because for how marvelous it would be to have them, the practicalities of recruitment and retention make them extremely implausible (so let’s just take them on face value).  He has an underground lair in an unusual location.  But most of all, he believes that he’s doing all of this horrible stuff with the noblest of intentions driven by a personal tragedy.  Yuri understands that “money buys power,” and that his invention will make him “more powerful than God” (assuming God wears a digital watch; most likely a Casio Databank).  Nevertheless, he declares that his ultimate goal is world peace, might making right and all that.  He is a monster with a cause, just like Ron.  The only difference is that Yuri is indiscriminate in his choice of victims, while Ron is only slightly more discerning.

MVT:  The film’s action sequences stand out for being both multitudinous and well-executed.  They are the glue binding the film together, but I think they ultimately struggle to do so because the non-action scenes are so incredibly hollow, it makes sitting in one spot in anticipation of the next car chase/shootout/et cetera something of a chore.  Unless you enjoy reaction shots without reactions.

Make or Break:  The first body melt piqued my interest, and Castellari doesn’t shy away from the gore.  If only there had been just a few more of them.