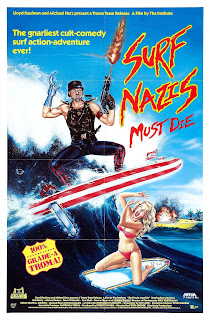 Troma films always manages to deliver the strangest movies. Some of their movies are down right weird, some are stupid, many are insanely gross, but all of them are strange. Surf Nazis Must Die is a shinning example of how strange a Troma film can be. It's full of over the top violence, a strange plot, an entertaining protagonist, and cheesy effects.

The opening credits also provide the info dump for the movie.  Somewhere California,  has been hit with an apocalyptic earthquake. The result of which is that the police are unable to to deal with the surfer gangs that are now terrorizing the city. The earthquake also destroyed Mama Washington's home. She will be the hero of this movie. Finally, because it's an apocalyptic setting there of course there have to be Nazis. In this case, Nazis that surf and have plans to rule the beach for a thousand years.

The story splits into two plots. The first plot shows Mama Washington life after losing her home to the earthquake. She has been placed into a nursing home and is getting a long well with the other residents. Though it is never made clear why she is sent to a nursing home in the first place. Also, later in the film she shows that she able to take care or herself. In fact her and Charles Bronson could have easily cleaned up old Detroit from the Robocop movie (the original not the remake). The other plot shows how Adolf, Eva, Hook, Brutus, Mengele, and the rest of the Surf Nazis spend their time until the third act. A lot of stealing from people, improvising weapons for their surf boards, and surfing.

Both plots collide when Leroy, Mama Washington's son, is out for a run by the beach and runs into the Surf Nazis. Being dickhead nazis they kill Leroy and unleash the wrath of Mama Washington. So she heads off the local pawn shop and gets everything she needs to wage war against gangs. A high caliber semi automatic hand gun and some grenades.


This movie can't make up it's mind what kind of a movie it wants to be. It wants to be gang crime film in the worst way but it keeps pushing the post apocalyptic theme without having an apocalypse. It is hard to get into the gang part of the movie because the movie assumes that the gang that rules the beach rules the city. It has some well shot surf scenes and when the movie sticks with a theme it does it well but as a whole the movie is an entertaining mess.

MVT: The surfing footage is rather impressive.

Make or Break: The tone of this film will take you out of the film a lot. It will be doing it's wacky surf gang that is nazi themed and out of no where will cut to the gang be proper criminals. Then jump to angry woman out for revenge and then to slice of life America circa 1980's.