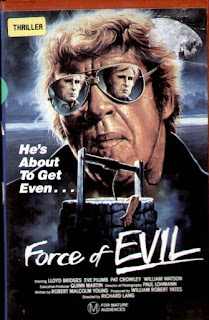 William Conrad’s stentorian, gravel-and-whiskey voice intones, “In everyone, it is said, there is a spark of the divine.”  The POV camera pulls up on a traffic accident, and our omniscient narrator opines that this spark can as easily be a force of good as it can a (dun Dun DUUNNN!) force of evil.  We cut to Dr. Yale Carrington (Lloyd Bridges), fresh out of surgery, and regretting (in a “can’t see the forest for the trees” moment) that they had to amputate a limb (NOTE: None of this has any bearing on the rest of the film).  Returning to his office, he is met by Teddy Jakes (William Watson), fresh out of jail for rape and murder, who wants his old job in the hospital crematorium back.  After being denied (I suspect he never actually wanted to get re-hired, don’t you?), Teddy sets forth on a campaign of terrorism and revenge against Yale and his family.

Richard Lang’s The Force of Evil is a television movie that was aired on the NBC network under the banner of Quinn Martin’s Tales of the Unexpected, an anthology series of eight programs that focused on genre stories, primarily of the horror/science fiction bent.  Of the eight, this is the only one that was feature length.  At this time in America, violence was a big seller (honestly, though, was it ever not?), but the restrictions on television producers forced them to be roundabout in its on-air depictions.   Today, a story like this would be too tame for even the most common episode of something like Law & Order or Criminal Minds.  For as much as it can, this film fulfills the promise of violence, just in a more suggestive (and I would argue more effective) manner.  Television was also taking chances with stories that, while still being formulaic and imitative of their big budget brethren, were still somewhat unconventional in their content.

The Force of Evil is, for all intents and purposes, a remake of 1962’s Cape Fear.  A psychopath menaces a family as an act of vengeance, and the family is pushed to extremes to end the threat.  Teddy is untouchable by the law (up to a point), and like Max Cady, is bold and smug at every turn (Teddy also has a habit of smacking his chewing gum which only augments his easygoing arrogance, and he is positively gleeful when he reminds Yale that he’s a rapist, which he does often).  Yale is frustrated by the system (the same one that he aided in getting Teddy incarcerated, ironically), and has to go outside it to save his loved ones.  Ostensibly “good” people are forced to do bad in order to combat malevolence.  They are brought down to the level of Jakes, because that primal arena is the only one in which he can be combatted and defeated.  It’s so similar to J. Lee Thompson’s film, in fact, that there is even a climactic confrontation on a houseboat.

The twist in Lang’s film is that Teddy Jakes is implied as being the literal embodiment of the title’s namesake.  Diabetic Teddy’s insulin is spiked by Yale (why we’re not shown the scene of him sneaking into Teddy’s room to do it is a mystery, since the suspense of such a sequence could have worked liked gangbusters), and his dead body (we’re also cleverly never shown Yale verifying this) is dumped down an old well (the single moment of the film I remembered from my youth, and the impetus for my rewatching of it for this review, is when they haul the body back up) by Yale and wife Maggie (Pat Crowley).  But Teddy returns and ups the ante on the Carringtons.  After being drowned by Yale’s own hands, Teddy’s body disappears.  Further is the insinuation that young Cindy Carrington (Eve Plumb) has a quasi-psychic rapport with Jakes or maybe just psychic abilities in general.  She has a dream about Teddy throwing an amputated leg into a ring of fire, though she doesn’t meet him until later (and somehow doesn’t recognize him), and doesn’t  know anything about his former job and seamy background.  But these supernatural elements are never addressed explicitly.  They are simply presented as they happen and then are left there for the audience to decide.  This is the sort of storytelling I enjoy, because the lack of confirmation enhances the uneasy feeling of the narrative.  The explanations could be extraordinary or mundane, and we’re credited with enough brainpower to not need to have the answers spoonfed to us (another difference between television programming then and now, in my opinion [yes, there are and will always be exceptions to this, but let’s not nitpick too much, shall we?]).

The filmmakers also keep the viewer off-kilter through the cinematography.  Much of the film is shot at low angles, making the characters loom in the frame and creating a sinister atmosphere.  Ultra-wide fisheye lenses are also employed, further emphasizing the unsettled feel of the world these character inhabit (and in which, oftentimes, massive hands are all but punched out of the screen into the audience’s eyes, a sly form of violent metaphor by “invading” the viewer’s space).  A few split diopter shots add to the ambience, as well (has that murky middle ground in this type of shot ever been used as anything other than a hothouse for suspense to blossom?  I would suggest no).

As with the intimation of the paranormal, and knowing the boundaries of television standards on violence, the film’s producers filled every moment of The Force of Evil with (sometimes overwrought) tension, even between characters who supposedly care about each other.  Yale goes to his sheriff brother Floyd (John Anderson) for help, and here we learn that the older brother resents the success of his younger, doctor sibling.  Their exchanges are terse and loaded with verbal jabs at each other.  Yale seems to merely tolerate his son and daughter, and his relationship with his wife feels like it’s just dying to explode in emotional violence at any minute.

After explaining to Maggie that Teddy is “a sick man,” she wants him dead (“I’ve never been this close to evil before”), and that’s before Teddy freaks her out by sending her a box with an amputated arm wearing a ring similar to that of her son John’s (William Kirby Cullen).  This scene is crucial for this film to work, for two reasons.  One, it makes the danger very, very real while wringing every ounce of anxiety out of the situation.  Two, it is returned to at the film’s end as a final sting that manages to be both open-ended and also fittingly grim and terrifying.  While the high-strung disquiet of the film does go a little into the area of histrionics at times, I found it works more often than not, and it manages to do what its producers wanted it to: namely, keep the watchers’ asses in their seats through the commercials.  Granted, I watched it sans commercials, but I don’t think I would have moved even if there had been any.

MVT:  Lang and company do a marvelous job creating and maintaining the tension of the film from its opening prologue to its chilling denouement.

Make or Break:  I love the ending minute or two of the film.  I can’t say that the narration over it works as well as the actual moment, but I believe it to be a wonderful summation and a bit of punctuation on a story that’s both familiar and a little offbeat.