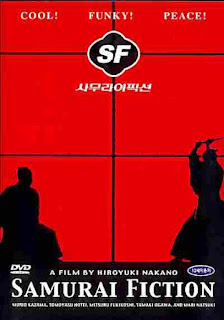 This is not the usual feudal Japanese samurai movie.It has samurai, yakuza, political intrigue, ninjas, and people getting killed with stylized sword fighting. However, it the tone of the movie is far from a roaring revenge and bloody destruction samurai film. Instead, few people with katanas (samurai swords) are actually good at fighting with them and the movie spends more time preaching it's message and showing a slice of life in seventeenth century Japan.

The movie follows Heishiro, a son of clan counselor and a complete and utter tool.  After the accidental theft of sword given by the ruling family,  Heishiro and his friends decide to chase after the thief and return the sword.  The fact the three of them are know locally as the three stooges does not deter them from this quest. Heishiro's father sends some ninjas as well after the thief so there some competent adults involved as well.

Heishiro and his friends catch up quickly with Rannosuke and learn the hard way that they are no match for Rannosuke. Heishiro and one of his friends only end up being injured in their ill advised fight.  The other friend who had an arranged marriage to look forward to was even less lucky and was out right killed. Heishiro and the remaining friend would have finished off but a ronin (unemployed samurai) called Hanbei intervenes and stops Rannosuke's attack without drawing his sword.

Heishiro is taken to Hanbei's home to heal from his wounds. While there Hanbei tries to impress upon Heishiro the importance of not killing Rannosuke. In a village not too far away  Rannosuke made himself useful to a yakuza gaming parlor. But is finding that being the baddest swordsman in a one horse town is far from what he desires. Also, his confidence in his skill were shaken when Hanbei was able to fight him to a draw without pulling his sword. This doubting of his skills leads Rannosuke to seek out Hanbei to force a duel and resolution.

The movie itself is beautifully shot and uses the minimal use of colour to impressive effect. The soundtrack is equally impressive. The plot has a tendency to wander quite a bit. It will go along with it's story and it's message of needless leads to suffering for a few minutes and then wanders off to show slice of life feudal Japan. It can be jarring and it took me out of the film a couple of times. Also, the humour does not always translate over to english very well. So there are scenes that are meant to be humourous but if you lack the necessary cultural background the joke just doesn't work.

Overall it is a recommended watch if you want to see Japanese cinematic art that is filmed depicting the seventeenth century.

MVT:  I liked Tomoyasu Hotei's soundtrack for this film. He also did some of the music for Kill Bill and I love the hell out of that soundtrack as well. Yes I am a fan boy.

Make or Break: The humour in the film is very dependent on the viewer's knowledge of Japanese culture. At points in the movie Heishiro gets a nosebleed every time he spends anytime with Hanbei's daughter. If you aren't aware of the Japanese belief that nosebleeds are a sign of sexual arousal it makes no sense why the shot lingers so long on his nosebleed.