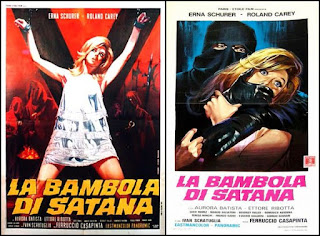 Elizabeth (Erna Schurer) travels with her fiancée Jack (Roland Carey) to her uncle’s creepy old castle after the passing of the old man, but someone doesn’t want her to stick around for too long.

Ferrucio Casapinta’s La Bambola Di Satana (aka The Doll of Satan) is a gothic mystery in a quasi-giallo mold.  The castle provides an appropriately spooky setting, perhaps one of the most essential of all gothic elements.  Said castle has a dungeon with mannequins occupying its requisite torture devices (it was a “museum” according to sexpot governess Carol [Lucia Bomez], though it’s about as effective in that regard as the display cases at a carnival freak show, maybe less).  It has a ghost story running through it in classic Scooby Doo fashion (again, maybe less).  It has black-hooded malcontents skulking about and knocking off people.  Like many gothic fictions, the film relies on the mood created by the locale rather than anything generated by its story.  There is innate menace in the stones of medieval architecture, and the filmmakers try to capitalize on this.

Since the story is not actually set in the past, our main characters are modern in dress and manner.  Jack doesn’t just have a car, he has a little two seat convertible (I couldn’t tell you the make and model).  Carol doesn’t care for these youngsters coming to the castle.  She believes that all young people want to do is get hopped up on goofballs and party (or something).  There is an intersection and conflict, then, between the present and the past at work to some degree in the film.  Carol represents the old, Elizabeth the new.  For example, there’s some discussion about wiring (maybe it was re-wiring) the castle, a suggestion at which Carol scoffs (please note, this is also about as interesting as most of the conversations in this film get).  Sir Balljanon (the uncle) lived in a castle but was doing research on Uranium.  There are scenes of the local teenaged fauna dancing to groovy pop music at the local café.  Contrarily, for as much as Carol puts on the air of a stuffy, Victorian governess, when the glasses come off and the teddy goes on, she becomes much less repressed (she’s also into some BDSM action).  It’s a commonly held belief that gothic stories are about repression and the desire that must boil up over it, and that’s certainly present here.

Interestingly, it’s the film’s representation of sex that stands out even more than any mystery or gothic elements.  As to the aforementioned teens (who have absolutely no bearing on the narrative, despite the length of time we dwell on them), the camera leers at the girls shaking their moneymakers in their tweed, knee-length skirts (in fact, it tilts down and holds on their lower halves).  Elizabeth’s friends, Gerard (Giorgio Gennari) and Blanche (who have absolutely no bearing on the narrative, despite the length of time we dwell on them; are you noticing a trend yet?), sleep together in one bed (we don’t know their marital status, but let’s assume for the sake of argument that they’re unmarried).  By contrast, and more importantly, Elizabeth and Jack not only sleep in separate rooms, but there’s also the intimation that Elizabeth is a virgin, and they’re saving it up for marriage.  Out of everyone in this film, these two are the most traditional (you could call them out of date) in their perspective on sex.  If anything, they are tied more closely to the creaky, old castle and what it represents than anyone else.  They belong at the castle, despite their trappings of modernity.  By that same token, Elizabeth is the only person who gets naked on screen multiple times.  It’s as if the filmmakers want us to lust for this woman specifically (actually, they want us to lust after all the women in the film [with the possible exception of Blanche], though the focus is on Elizabeth) because of her chastity.  It’s sort of a Madonna-whore complex going on, which is why Elizabeth is also the only character who has sex on screen.  That this is a hallucination/dream points back to the clash between old and new attitudes, as it symbolizes Elizabeth’s desire for sex in spite of her physical denial of it.  Because the audience is invited to watch for titillation indicates a subversion of her traditional outlook, a vicarious deflowering of Elizabeth, if you will, and a quasi-condemnation of archaic sexual mores.

So, let’s get down to brass tacks.  La Bambola Di Satana is lackluster in just about every way (or at least in all the ways that count).  The compositions are standard fare that even the castle’s interiors can’t quite manage to spruce up.  The score is unmemorable, as are the characters (Carol is the only one who generates any kind of interest, but that’s more for the straitlaced/sex kitten dichotomy she has going on, which is also sadly more teased than pleased).  The film brings up points and then completely forgets about them rather than capitalizing on them.  Chief among these is the inclusion of Jeanette, the sister who has gone insane and now spends her time taking up occupancy in Elizabeth’s old room and making faces at her dolly.  Even after Jeanette witnesses something fairly early on, it has no consequence on anything.  Mr. Shinton, Sir Balljanon’s research partner has papers that Elizabeth needs to see, but, to my recollection, that’s where the reference to them ends.  Even the subplot involving “starving artist” Claudine (Aurora Bautista), which should have had a huge impact on the story, just piffles along and comes to an undistinguished end.  The nail in the proverbial coffin, however, is the constant repetition of dull scenarios that stop the story dead and then bludgeon it a bit longer for good measure.  There are at least half a dozen scenes of characters eating (mostly at the castle, but sometimes at the café), so they can deliver dialogue that is neither expository nor revelatory (okay, sometimes there’s a little exposition, but not much).  Further, the multiple scenes of the teens dancing at the local hangout serve less than zero purpose.  I take that back.  They show us that there is a character hanging out eating in the background, and we know he must be important for two reasons.  One, none of the youngsters mean fuck all to the film.  Two, he’s always lounging in the background of the cafe while extraneous characters writhe about in the foreground, sucking up the viewer’s attention.  Needless to say, his part to play in this whole affair is yet another misfire in a film that unfortunately is more fizzle than steak.

MVT:  The castle is a decent setting for the film, but I’m just going to be honest and give it to Ms. Bomez.

Make or Break:  The first café dance scene dropkicks the film’s narrative right in the head.  The problem is, it takes a few moments for the viewer to realize how utterly useless this scene is in spite of the fact that there’s so much attention paid to it (and one girl in particular, who I expected to play some larger role; she did not).