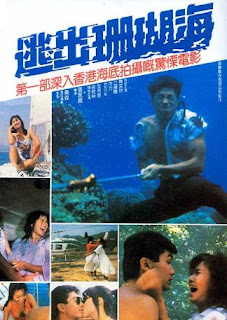 A corpse is set off to sea while priest Ming (Fung Woo) performs a ceremony that finishes up with the body of the deceased igniting in flames.  Cut to: some nude chick swimming and coming upon a burnt head floating among the coral (for absolutely no reason other than to display some skin and a little grue; hooray!).  Cut to: Alex (Alex Fong) and Chen-Chen (Yin Cheung Joh) cruising up the coast in Alex’s convertible where they are met en route by a helicopter carrying Chen-Chen’s sister San-San (Elsie Chan) and mutual friend Irene (the truly lovely Yuen-Ching Leung).  The quartet head to the titular cove, do some boating, and are “menaced” by a “monster” (Roy Cheung).

If Terence Chang’s Escape from Coral Cove (aka Tiu Chut San Woo Hoi) owes a debt to a film other than JAWS, it is Jack Arnold’s The Creature from the Black Lagoon.  Primarily, both films deal with a group of people who invade a monster’s territory incurring its wrath.  Further, and more importantly, they both feature a monster who falls in love with a woman in a white bathing suit.  The key difference is that Julie Adams didn’t have Donald Duck on her swimwear.  Actually, the key difference is that the Gillman had some personality, whereas the creature in this film (who is also named Roy, coincidentally) has less than none.  Also, the Gillman is one of the greatest monster designs and costumes in the history of cinema, while Roy is just Roy Cheung ambling around with a blank expression and looking like Roy Cheung.

At any rate, this film deals heavily with lust and sexuality, and it’s set apart into two groups of three characters in this regard.  Alex, Chen-Chen, and San-San are the libidinous side of this equation.  Even though Alex is dating Chen-Chen, he has eyes for pretty much any female that happens to cross his path.  San-San is a large-bosomed floozy (and the film really, really focuses on that descriptor) who flings herself (in an extraordinarily chaste, cocktease sort of way) at Alex at every available opportunity, regardless of whether her sibling is within line of sight or not.  Chen-Chen just wants to have Alex all to herself, as she practically hangs off him like a feather boa.  The salacious nature of these three characters is the source of great friction.  Their concupiscence is the reason why they’re some fairly unhappy characters at heart.

By contrast, Irene, Roy, and Dak (Louis Kong), the lowly painter who the group come upon and invite to tag along, are the virginal characters that actually drive what little story the film has.  Irene is always bright and sunny, and she always wears white (read: purity, though it is also a color associated with death and mourning in China, interestingly enough).  Further, she doesn’t spend her every waking moment thinking about or trying to engage in sex.  Likewise, Dak is coded as a virgin.  He is unassuming and awkward, and he has no interest in either of the bimbo sisters (okay, he likes checking out San-San’s bust, but that’s perfectly understandable, and he never acts on this anyway).  Roy was a virgin when he died.  While he kills other characters, he can only stare vacuously at Irene, transfixed by her beauty and stymied by his virginity.  This difference between the two groups is summed up by parallel scenes involving CPR.  Chen-Chen bites Alex’s lip in a fit of jealousy while he administers CPR to her.  This is followed by some testicular trauma.  However, before Dak can lay his lips on Irene later in the film, she comes to.  The lechery of the former trio is a source of turmoil and discontent.  The chastity of the latter group is the emotional core of the film, such as it is.  That Roy would kill to get to Irene is the pure expression of this virtue’s value.

Similarly, Escape from Coral Cove deals with class status to some degree, and again, this is divided up into the same two groups of characters.  Alex’s group is affluent.  He has a nice car.  He has a condo in an exclusive development.  He has a sailboat.  San-San has money enough to have a helicopter fly her to his side (under the guise of doing the nice thing of bringing Irene to see Chen-Chen).  Chen-Chen revels blithely in the luxury that her and Alex’s wealth affords them.  Alex despises just about every other character in the film and is unpleasant to all of them, his air of superiority wafting off his scrawny, yellow-speedo-slung body.  Contrariwise, Irene is posited as the humble friend (in terms of monetary status and demeanor).  She has just come back from a couple of years in Canada.  What she did there, we don’t know, but the idea is that she was divorced from the sisters’ lifestyle, becoming a better person while they became worse.  Dak is a lowly manual laborer, and he is included in the shenanigans on a lark.  Roy was a citizen of the fishing village that existed where the posh development now stands.  He was even buried in the cement that formed its foundation, a victim of the callous apathy of the ruling class.  And yet, all of these characters are lower than the white, ultra-privileged people who also live in (and, we can assume, own) the Cove.  Our protagonists crash a pool party where the elite dine on gourmet hors d'oeuvres and sip champagne.  When a blonde cougar makes a pass at Dak (“Hi, handsome!  Let’s be friends, shall we?”), her snobby, ascot-wearing husband has all of them ejected.  The protagonists are good enough to pay for property in Coral Cove, but they’re still considered undesirable by the people who truly control the wealth and power (and there’s a hint of racism to this, though it’s not emphasized overmuch).

All that said, Escape from Coral Cove is neither a very good nor a very enjoyable film.  Discounting the fact that Roy is unimpressive in both his lackluster “ugly” form and his “regular guy” form, the film is little more than home movies chronicling the vacation of people who are, by turns, unappealing and not compelling.  So much of this film is concerned with showing the one-dimensional characters doing beach/seashore activities, one gets the distinct impression that it not only doesn’t give a shit about its supposed monster premise, but also that the whole production was nothing more than an excuse for the cast and crew to go to the beach for a few days and get paid.  Fair play, if you can get away with it, but if you’re going to fuck off at work, you should at least try to make it look like you’re doing your job.

MVT:  Leung has a magnetism about her, and she’s certainly easy on the eye.

Make or Break:  The first glimpse of Roy is prosaic and immediately disheartening.  It’s not enough that he will transform later into a handsome man to make up for how much of a letdown this indifferent makeup is.