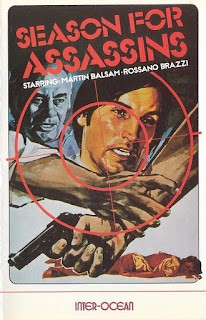 Within the Italian poliziottesco genre, there was a sub-genre of “youth gone wild” films.  These films would typically portray the Italian youth as entitled, violent sociopaths who committed crimes out of sheer boredom.  Savage Three, Like Rabid Dogs, and Young, Violent, Dangerous are all examples of this sub-genre.  Season for Assassins is another such film, but in this film’s case there’s more focus on the loved ones of the young criminals and how their lives are impacted by the selfish acts of said criminals.

Season for Assassins focuses on the life of a young petty-thief named Pierro, played by Joe Dallessandro.  Pierro has aspirations of becoming a criminal kingpin by working his way up from the bottom of the underworld.  He and his hooligan friends are shown pulling off burglaries for small sums of money, when of course they’re not riding around Rome terrorizing those who get in their path.  The opening plays out much like the opening of A Clockwork Orange, but that’s as far as the comparisons go.  Gradually, different characters in Pierro’s life are introduced.  We learn that Pierro is a father to a newborn and that he has a wife named Rossana.  Rossana is a former prostitute who is now committed to being a mother, even though Pierro is neglecting both her and the child.  We are also introduced to Pierro’s family priest, Father Eugenio, who has faith in the young man and attempts to help Pierro stay on the straight and narrow, despite Pierro constantly brushing him off.  Finally, a third significant character enters Pierro’s personal life, a naïve, young girl named Sandra, who Pierro strikes up a romantic relationship with.  These three characters will all eventually be negatively impacted by Pierro’s selfish and destructive lifestyle.  In one particular case, the impact is fatal.

While Pierro is going around wreaking havoc, a very jaded and disgruntled police captain, played by screen legend Martin Balsam, is nipping at the heels of Pierro and hoping to finally set the right trap that catches the hoodlum.  Balsam’s character is supposed to act as the counterpoint to Father Eugenio.  Where Eugenio sees hope for the young man, Balsam sees a thug and lost cause who will inevitably hurt and/or kill several people before he gets himself killed or caught.  I suppose another parallel could be drawn from this and A Clockwork Orange in terms of the debate over whether or not criminals can truly be reformed.  Unfortunately, this question is handled rather clumsily in Season for Assassins.

It’s commendable that director Marcello Andrei attempts to construct emotional depth within the characters of his piece, but most of them still come off as one dimensional.  With the Pierro character, specifically, there’s a scene where he’s shown to be physically ill by the violent actions that he allows to occur against one of his loved ones.  However, this is the only moment in the movie where the character seems to show any remorse or humanity.  We are never given Pierro’s backstory to have a better understanding of how he got to this point in his life and potentially feel some empathy for the character.  Another problematic aspect to the film is that Andrei can’t seem to decide if he’s making a melodrama or an exploitation film.  The scenes between Pierro and his young mistress, Sandra, bounce from being honest and genuinely dramatic one minute to being sleazy and exploitative the next.  It makes for a very uneven viewing experience.

Despite these flaws, Season for Assassins is certainly worth seeking out for the hardcore Eurocrime fans.  Joe Dallessandro brings a sadistic charm to the Pierro character, which is entertaining to watch.  The character may be one note but Dallessandro plays that note well here.  Balsam’s portrayal of the grizzled, old police captain brings some class and legitimacy to the picture.  And Andrei peppers in enough violence and action to keep things interesting throughout the runtime, even if it is 10 to 15 minutes too long.  Season for Assassins isn’t going to show you something you haven’t seen before from the crime drama, but you could definitely do much worse from this ever broad genre of film.