I’m really not the kind of guy that’ll be afraid of admitting that a movie is smarter than him. I always like to think of myself as a relatively perceptive guy when it comes to interpreting films, but I won’t think twice about openly admitting that a film flew right over my head. Sometimes that doesn’t even pertain to my enjoyment. There are usually two questions tumbling around in my head once I run across a movie that I can’t quite grasp: Does it fail, because it can’t sufficiently express itself to the audience? Or Does this require multiple viewings and ample time for the film to gestate in my mind? Isao Yukisada’s Parade is one of those great cinematic treats where I can ask both questions and come up with suitable answers to both. 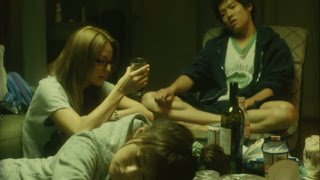 The film focuses on four roommates in a cramped Tokyo apartment: rural slacker Ryosuke(Keisuke Koide), ditzy and dependent Kotomi(Shihori Kanjiya), artsy Mirai(Karina), and shiny jogging-suit enthusiast Naoki(Tatsuya Fujiwara). They all share a typically amicable friendship with one another, even though their only common tie is that they share a living space. Then, one night, a mysterious stranger named Satoru(Kento Hayashi) starts to shack up at night and mill around during the day, even though no one claims they invited him or even know who he is. Is he related to the series of murders around the city? Does he have ties to their neighbor, who has illustrious visitors that include government officials? 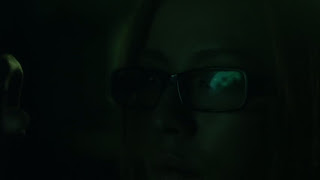 The film starts out innocently enough, as it plays out like a slacker comedy of sorts as Ryosuke and Kotomi look for solutions to their love lives as well as trying to figure out what the hell is going on next door. This all plays out with a heaping helping of whimsy and soft lighting, but as the characters’ stories progress, we gain greater insight into the darker corners of their lives. Each roommate has a section of the film focused on them, but Yukisada thankfully opts for a sequential narrative. Ultimately, you can’t let the first hour fool you, as the film goes into some pretty stark, harrowing areas by the end of the movie. What starts out as light and fluffy, later delves into themes about identity, our perception of others, and the length at which we’ll go to sustain those perceptions for our own self-preservation.
There isn’t a whole lot of cinematic trickery to be found in Parade. What you have is a tight screenplay(written by Yukisada), capable actors, and a director who knows how to manipulate how the film is viewed to bolster the thematic beats. It initially appears like the movie is split in two and suffers from a sharp identity crisis, but it becomes revelatory once the film ends as to why Yukisada uses this specific form of deception. Yukisada is also a director who knows when to take himself away from the film and just let the actors breathe and he has a great young cast to work with. Each actor does a fantastic job at showcasing their own individual form of isolation and how they use each other to protect themselves from the lower depths. The standout is easily Keisuke Koide’s Ryosuke, whose character shifts from loveable dope to someone who is nearly broken by metropolitan isolation. Even Tatsuya Fujiwara showcases some serious development as an actor that wasn’t really seen in his mainstream fare(Battle Royale and Death Note). 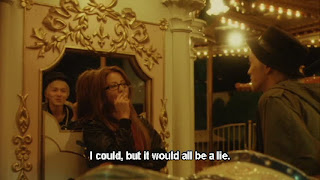 This all reads like glowing praise for a dense, complex treat of a movie and it really is. I think. Once the film ended, I couldn’t help but feel like I had watched a film that had too many loose strands. I’m not so much talking about plotholes, but moreso the feeling that the movie just wasn’t as tight as it could’ve been. As subtle as the film is as a whole, there are still moments where it comes on way too strong, whether it be Naoki randomly blurting out ideas about the multiverse or ruminations on the nature of “truth”. While those moments uncomfortably spell out the themes, there are digressions such as fortune telling and the true purpose of Satoru that don’t seem to support anything else in the film. These digressions, among other things, can be revisited and possibly explained on future viewings. I just can’t help but feel that the film could’ve benefited from some more judicious storytelling. Maybe either trim the fat or just simply keep your hand closer to the vest until the final act. I’m going to give the film a lower score than it probably deserves, but that’s only based on my feelings at the moment. I get the distinct impression that Parade has more in store for me and that’s an exciting treat for any film lover. 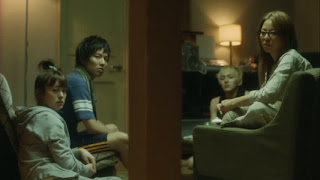 Make or Break: It really all comes down the final scene. Yukisada builds up everything until this moment and it wasn’t until then that it really came together for me. It isn’t the most explosive finale you’ll see, but it really hit me square in the chest and gave me a lot to chew on.
MVT: I have to give it to Isao Yukisada. It should be mentioned that this is an adaptation of a best-selling Japanese novel by Shuichi Yoshida, but it is an adaptation that works very well for the screen and his direction is assured, but not remotely over-bearing. Unless you’re a real visual auteur, this is the kind of combination that I love the most in a director. Sometimes I just like someone who knows when to get out of the way and just let your film work on its own.
7/10
Posted by Jake McLargeHuge at 8:40 PM