The Matsugane Potshot Affair opens up interestingly enough. An aerial shot shows an immobile woman lying in the snow as a young boy wanders upon her. What starts out as a macabre introduction, takes a turn for the decidedly…perverse. Instead of the boy recoiling in horror or taking an interest in finding a dead body, he goes in to cop a feel. This serves as an excellent introduction to the mood of the movie. It’s a little dark, a little humorous, well-shot, and has a healthy dollop of innocent perversion. 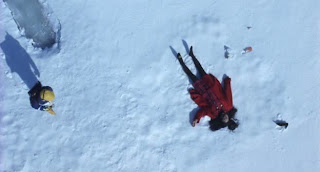 Nobuhiro Yamashita’s film centers around two brothers: police officer Kotaro(Hirofumi Arai) and dim slacker Hikaru(Takashi Yamanaka). Kotaro is dealing with a possibly imaginary rat infestation at the police station and Hikaru has his own issues to deal with as he’s seen trying to hammer out a dent in his car. You can draw your own conclusions from there. I don’t want to spoil anything from here, but pregnancy, sibling inferiority, a sinister man related to the woman in the snow, and a bag containing gold with a severed head play prominent roles in the rest of the movie. If I had to resort to shorthand, I would say it’s a mixture of Fargo with the emotionally arrested development of Wes Anderson characters. 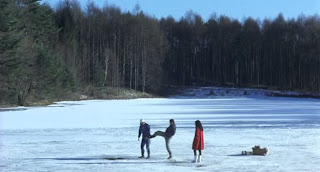 As assured as the cinematography is, the most accomplished aspect of the film is the acting. I’ve been a massive fan of Hirofumi Arai ever since his impassioned performance as Aoki in Blue Spring. This film allows Arai to exercise entirely different acting muscles as he swings from a simple police man to an affectionately loyal brother. He has the perfect wide-eyed, but not cutesy expressions to play up the deadpan humor. Like everyone else in the movie, Kotaro can barely comprehend how he’s supposed to deal with the problems at hand. Upon digging up the severed head with his brother, Kotaro proclaims “Let’s go the police”. Yamanaka’s Hikaru doesn't fare any better in dealing with the quiet menace of Yuichi Kimura’s character as well as his own sibling inadequacies. 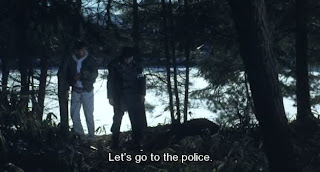 The cast helps deliver the humor with subtle charm and inspired physical comedy but, Yamashita isn’t a director to rest on the strength of his cast. His assured shot composition not only assists in the visual gags, but is also quite handsome to boot. There’s a luring depth to the composition as the director is content to let scenes play out with a stationary camera. The camera focuses on all characters in the composition instead of zipping from close-up to close-up and helps the measured pace of the comedy considerably. 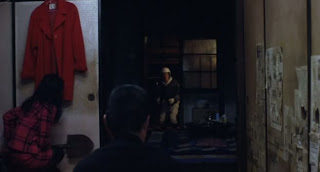 The Matsugane Potshot Affair isn’t the most accessible film though. Even though subdued dark humor is nothing new to a Western audience, much of the humor can pass by before you can really register it. Sometimes the humor is just too subtle to elicit any sort of immediate response. Although, just like a horror movie doesn’t have to scare in order to be effective, comedy doesn’t really need to bust a gut either. The movie grew on me more and more as it went on and I became fully invested once the familial strife comes to the forefront. In terms of the ending, I appreciated that it didn’t go the saccharine way of showing the joyful banality of everyone’s lives, but rather showed it’s nothing to celebrate nor mourn. Life ain’t exactly grand, but it ain’t half bad most of the time.
Make or break: The relationship between the two brothers is what the emotional core of the movie consisted of. This is what really draws in the audience aside from the whacked out crime aspect and the droll characters. Aside from their likeable presence, their bond is what really makes the audience care about whether they can manage a solution to their predicament.
MVT: Yamashita’s direction provides the cohesion to what could’ve been a muddled mess of a movie. His confident cinematography and deft treatment of the actors helped realize a uniquely humorous slice of fun. I would strongly encourage everyone to check out Linda, Linda, Linda which was my introduction to this interesting talent.
8/10
Posted by Jake McLargeHuge at 9:58 AM