Directed by: Harley Cokeliss
Written by: John Carpenter, William Gray & Desmond Nakano
Starring: Tommy Lee Jones & Linda Hamilton
Black Moon Rising delivers a premise we're all accustomed to in B-movie action cinema. Our very honorable government dislikes acquiring objects and information through unlawful means, but they have no issues hiring someone not on a covert alphabet soup agency payroll to do their dirty work. Enter professional thief Sam Quint (Tommy Lee Jones) to steal a highly valuable cassette tape that must contain awfully incriminating evidence against some big company. We know it is seriously incriminating because henchmen goons immediately pursue Quint with blaring automatic weapons to retrieve the tape. From what I gather, this cassette tape is a bootleg pre-release recording of Wham!'s pop masterpiece Music From The Edge of Heaven. I'd chase Tommy Lee Jones with an uzi, too, to keep that album off the black market circa 1986.
With these thugs hot on his trail, Quint manages to briefly escape for a pitstop at a gas station. Bad time for a bathroom break and to satiate that Baby Ruth craving, if you ask me. Nonetheless, Quint finds the perfect place to stash the sensitive cassette. He conceals it inside the hidden panel of a hi-tech prototype car, known as The Black Moon, en route to an exhibition. The car is hot crap because it runs on hydrogen and toplines at 300 mph. Unfortunately, a group of thieves led by female carjacker Nina (Linda Hamilton) heists the Black Moon for car theft ring overlord Mr. Ryland (Robert Vaughn) before Quint is able to get the cassette out. Further complicating matters is that the Black Moon is stored in the ruthless Mr. Ryland's skyscraper stronghold of stolen vehicles, which is something along the lines of a fortress to break into evidently. This leaves Quint with a 72 hours or else ultamatium from our secrective trustworthy government agency to get that tape back.
Black Moon Rising is probably most well known as written by John Carpenter and sold on spec shortly before his filmmaking career ascended. Supposedly the shooting script was heavily changed from Carpenter's original version that was turned in nearly a decade before the film went into production. If you examine Black Moon Rising closely, you can detect small Carpenter narrative threads woven into the story; the central plotline concerns an outlaw commissioned begrudgingly by the government to secure a much desired tape from a dangerous stronghold, reminiscent of Escape From New York. It should also be noted that the film features a strong lead female character not so uncommon to typical Carpenter pictures. Whatever revisions were made, the finished product is still a fun-filled affair. That is provided you can look past story quibbles like questioning Quint's strategy in hiding the tape in a moveable object such as a vehicle that can shatter land-speed records or, you know, in not duplicating the cassette tape.

The film generates the majority of its energy from the action scenes. While they're not exceptional, they are very well done with grittiness and served in abundance. Stylistically, the stripped down action reminds me of a 70s actioner, emphasizing car chases, gunplay and hand-to-hand fights. In particular, there's a nicely developed short fight exchange between Tommy Lee Jones and Lee Ving playing his old-time nemesis Marvin Ringer. Earlier in the film, there's also a simple though quite effective fight scene where Ryland's goon crew pummels Quint to a fairly brutal degree that concludes with a decent little surprise. And before the film wears out its welcome, the premise changes gears to more of a straight-ahead heist movie as Quint must work with the Black Moon creators on a tactical plan to enter Ryland's skyrise to get the prototype speedster back.
Director Harley Cokeliss isn't flashy in his approach, opting to basically stay out of the way and let the action on screen speak for itself without trying to punch it up with intensified editing or indulgent camera tricks. If not for the inclusion of the high powered roadster, Black Moon Rising would feel at home if tabbed as 70s action cinema, which is perhaps indicative of the length between the script's sale and actual production.
Tommy Lee Jones' steely grittiness and subtle coolness anchors the cast and picture. Not to belabor the point, but Jones' Quint feels like he came from the 70s and it's that tone that really permeates the whole and elevates it from falling into zany 80s trappings of the era. It is further intriguing to see a much younger Tommy Lee Jones headlining this style of movie. For me, I see him so much more as the older hardass superior character barking orders whereas here he gets to play the bad ass loner who refuses to take orders. Linda Hamilton turns in strong work as a car thief as well. She subverts the natural inclination to soften her performance by giving into the romantic relationship developed through Quint's character. Rather, she constantly maintains a toughness throughout that doesn't undermine her character nor the film itself. I will say that Bubba Smith nearly steals the show as our secret government agent when telling an innocent bar patron relieving himself harmlessly at the urinal to "put it away and get out" so he can have a private bathroom to conference with Quint.

If there's one glaring weakness, it is that the car of the titular title is not that cool. Black Moon looks like a useless dark wedge of plastic, something akin to a blown-up version of a cheap Matchbox racer. In fact, the car visually comes off as so diminutive that it feels like I could pack it around in one of those Hot Wheels grid-like carrying cases. Perhaps, my dislike for the car derives from the incongruence of a vehicle that screams bad 80s design hot rodding around in a picture giving off an intense 70s vibe. Why can't George Lucas put his digital re-wizardry to work on movies like this and replace Black Moon with a much cooler muscle car? 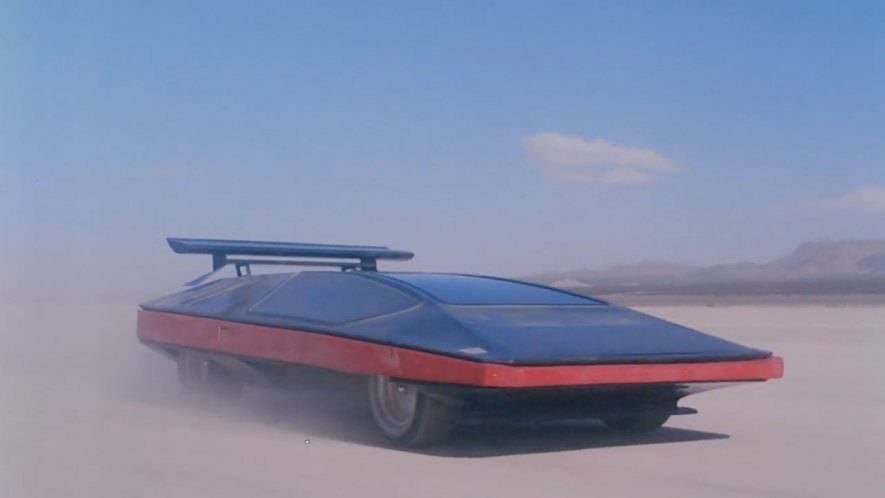 Make or Break scene - The most standout make scene is probably the car chase sequence that takes place during the film's finale in the skyrise. It isn't mind-blowing, but it does the build-up justice and caps off with a cool little shortcut between two high rises. Despite not finding the car all that cool, the action assists in defining Black Moon as a desirable mode of thievery transport.
MVT - The action. The film keeps offering a steady diet of action bursts, and that's what saves the film from questionable narrative directions and thin characters. Although, it is difficult to pinpoint one element that is predominantly more valuable than another as everyone and everything turns out solidly.
Score - 7/10
Posted by They Call Him Chad at 3:01 AM