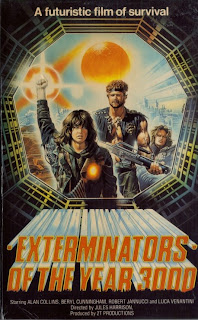 The end is nigh. Always has been. Prophets, scientists, and madmen have been prophesizing the end of the world for years, centuries even. An Italian prophet, Savonarola, convinced artist Alessandro Botticelli and thousands of others that the Apocalypse would occur in the 16th Century. Savonarola was eventually excommunicated and executed, Apocalypse-less. The Large Hadron Collider in Europe was feared for its potential to create a black hole big enough to swallow the Earth. It hasn't. Yet. Now they're using the machine to search for the hypothetical Higgs boson or "God Particle," and while there have been some murky results so far (at least from a lay perspective), it has also been speculated that the machine itself will not produce such a particle, because it knows that the consequences would very likely be catastrophic. That's like your car refusing to turn down a particular street, because it knows that a horrific accident awaits if you do. Super-chiseler-at-large Harold Camping predicted the Rapture would occur three separate times in three separate decades. Every time it didn't come to pass, a different, glib explanation was proffered as to why not.

Regardless of your personal religious/spiritual beliefs, the end of the world (and what will come after) has been big box office for decades. In the 1950s, movies like Arch Oboler's Five concentrated on the shakeup of American norms and mores. Would we maintain our stalwart values or devolve into animals in the face of civilization's destruction? In the anti-establishment, increasingly cynical 1960s, Earth-changing events took on a more fantastic element. From Day Of The Triffids to The Last Man On Earth, Armageddon was less likely to be caused by commie nukes than by viruses or aliens (of course, nuclear proliferation was still a consideration). Then in the 1970s, we were shown that not only had the much-feared nuclear holocaust already happened, but also the car stunts got about a million times better. 1979's Mad Max showcased a civilization holding on by its fingernails, where ultra-violent justice was meted out by leather-clad cops in super-charged cars. It was a game-changing film, and I would argue that every post-apocalyptic film since has borne a heavy influence from it and (at the very least) its first sequel, The Road Warrior.

Certainly, this is the case with Giuliano Carnimeo's (aka Jules Harrison) Exterminators Of The Year 3000. After the ozone belt portion of the stratosphere is destroyed by nuclear bombs, water becomes a scarcity. A small group of people hide out in caves, nurturing plants they plan to use to reinvigorate the planet's eco-system. The problem is plants need water, and the last person they sent out to get some still hasn't returned. Young Tommy (Luca Venantini) is more concerned than most, because it's his father that's missing. He stows away on the next tanker that is sent out to get water, but their convoy is attacked by Crazy Bull (Fernando Bilbao) and his dune-buggy-riding minions, who are lured by the sight of the tanker and the prospect of an easy target. Tommy escapes death along with the map to the secret water reservoir. Eventually, he comes upon thief, murderer, and all-around scumbag, Alien (Robert Iannucci). Tommy tries to convince Alien to help his people restore the planet, but Alien is only looking out for Alien. Will Alien finally become an altruist and discover true friendship and a purpose to life? Eh. Not really. 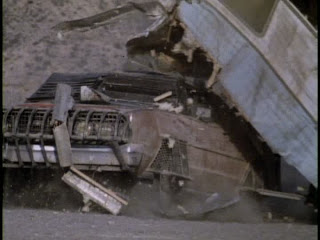 This is an example of what is sometimes referred to as "Pasta-pocalypse Cinema." Seeing as how it was an Italian/Spanish co-production, you can guess why. It has the "futuristic" fashions we've come to expect: Lots of leather and exposed skin (odd considering the lack of ozone in this future), motocross and football pads, studs, spikes, and chains wherever they can be added. And let's not forget the eyeliner/face makeup. All the vehicles are re-purposed from "the past." Apparently, every car in the future needs bars and grates across the windows and the front grill (and often over the wheel wells). Basically, they're "hoopties." Villains are required to ride in open-air autos. There are lots of dune buggies (though nothing as eye-catching as the one in Alabama's Ghost), dirt bikes, and pickups with the roofs removed. Settings are comprised of deserts and rock quarries, anything that can be done with a minimum of set dressing or permits. All of these requirements are met by this film. Unfortunately, it doesn't do much more than meet the basics. Even Alien/Crazy Bull's car, "The Exterminator," fails to impress as "the most powerful car in all the forbidden lands" (and if anarchy reigns, who declares areas "forbidden," anyway?). The interior consists of some flashing lights and a TV monitor for driving with the venetian blinds closed (yes, really). Absolutely nothing out of the ordinary is done with this vehicle. It doesn't talk, have flamethrowers or missiles, or even seem to handle all that well. The last of the V-8 Interceptors has nothing to fear from the Exterminator.

On the subject of Mad Max influences, the largest of them must be addressed. That would be car stunts. Miller's film, as it's been said dozens, if not hundreds, of times, captured the high adrenaline feel of super-fast car chases. The use of undercranked cameras and low-angle shots turned scenes of cars speeding around the roads of Australia into virtual car pornography. Carnimeo's film, by contrast, does not. Oh, there are enough car chases, and some of the stuntwork is even impressive. The problem is twofold. One, the style of shooting and editing these sequences together is flat. They're mostly shot from a good distance away and the shots hold for so long (probably for padding reasons), they lose any dynamism they may have had. Two, the sequences themselves overstay their welcome. Hard to believe in a film where they're the main attraction, but when the action is so lackluster, you'd prefer them not to stick around. There are some nice, slow motion shots, but they're rare and simply not enough to sustain prolonged interest. 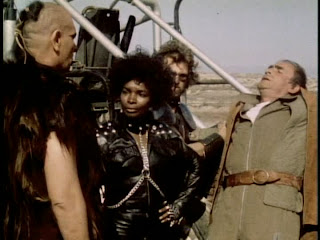 Generally speaking, these films are thematically concerned with two ideas. One is how we got here. This is typically an anti-war/anti-nuke sentiment and is used more as exposition than having anything intrinsically to do with the story. In Max's world, gas becomes a rare commodity, in Alien's world, it's water. This reflects the second theme – how we get to tomorrow. Funnily, Carnimeo's movie has the more interesting variation on this idea. After all, you can't live without water, but you can get from place to place without a car. The mistake the filmmakers make is in giving this aspect short shrift. The quest for water is nothing more than a McGuffin to string together action scenes (and is presented as such). This apathy pervades the film and only helps drag it down, in my opinion, particularly once we get to the end.

This movie is not done any favors by the writers or actors either. The dialogue is in the realm of "So Bad It's Good." Witness: "Once more into the breach, you mother-grabbers. Let's purloin that water." "A snakebite's better than a kiss from you." "Even a son of a bitch has a soul." And many more. Tragically, it just doesn't help to elevate the movie, even on a kitsch level. The thespian antics are spastic and po-faced simultaneously, but they're nothing more nor less than what you would expect from the time and place of the film's production. 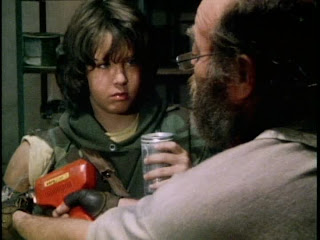 The only scene that I found truly engaging was in the warehouse with the underground reservoir. There are a bunch of great, pulp-style deathtraps, including a spiked, whirling log on chains and light-triggered arrows. Plus, the place is guarded by fire-and-brimstone-shouting mutants dressed like members of A.I.M. But it's just too little, too late to bring this movie out of the morass of mediocrity. When all's said and done, Exterminators Of The Year 3000 is strictly middle-of-the-road.

MVT: The car stuntwork is plentiful, and there are some decent enough gags. It's their monotonous handling that drains the excitement from them.

Make or Break: The "Break" for me was the final scene, where a Deus Ex Machina of the highest order negates everything that came before. In a film that's not about much to begin with, somehow they managed to make it about even less.