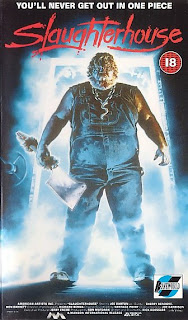 Buddy Bacon (Joe B. Barton) lives forever in my memories for one image. It was in a horror magazine ("Gorezone," "Toxic Horror," or another, I cannot recall). Anyway, the photo shows Buddy, a hulking, scruffy man in filthy bib overalls, leaning casually with one foot up on a broken chainsaw. In his hand is a knife-fingered glove reminiscent of that Elm Street fellow (I think Buddy might even be picking his teeth with one of the blades, hinting that Mr. Krueger sure was tasty). Somewhere on the floor is a beat-up hockey mask. Where Godzilla was announced in America as "King of the Monsters," we are to intuit from this oh-so-subtle picture that Buddy is "King of the Slashers." Well, not quite. What the image does do well is convey the overall tone of Slaughterhouse (aka Bacon Bits; I love that one). This is a fun little slasher movie that has its tongue planted firmly in its cheek (almost poking out the other side), that never received much recognition for what it gets right.

Jerk slaughterhouse owner Tom Sanford (Bill Brinsfield) has been trying for some time, with the help of his attorney Harold Murdock (Lee Robinson), to buy old man Lester Bacon's (Don Barrett) dilapidated property, on which also stands a slaughterhouse. Along with Sheriff Borden (William Houck), the men visit Les and his obviously not-all-there son, Buddy, and inform him that his property is going into foreclosure. Lester, who laments the death of craftsmanship in the slaughter industry and is Tom's former mentor, basically tells them to pound sand. Meanwhile, the sheriff's daughter Liz (Sherry Bendorf) – get it? – is preparing with her pals to shoot a horror video for some vague reason (a competition, maybe?). Guess where they wind up shooting. However, Lester has discovered Buddy's handiwork on a couple of whippersnappers who messed with his pigs and decides to lure his enemies to his abattoir and kill them, one at a time.

The film starts with a relatively non-graphic (yet decently bloody) double kill. The titles then come on with shots of pigs in a slaughterhouse going through their daily "routine." This is accompanied by a Bacharach-ian musical number. The entire movie bears this dichotomy. But it's not comedy versus horror. The two seem well-blended, so one doesn't overshadow the other. Some of the later kills in the film are fairly graphic in their depiction. Buddy himself is the center of both comedy and violence, but more on that later. Lester, on the other hand, is funny for all the wrong reasons. Despite his groan-worthy, pun-filled dialogue (which is not his fault), Barrett's delivery is so over-the-top, you start to wonder if it's really John Carradine in disguise. I'm thinking of starting an award for the most immoderate of performances. I'm undecided whether it should be called the B.E.M. (Bug-Eyed Monster) or Robert Marius (first commended for his efforts [okay, the only time so far] in my Zombi 3 review viewable here) Award. Food for thought. 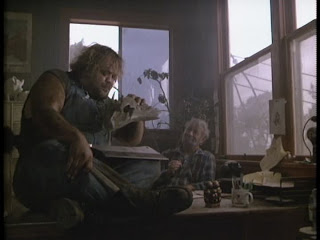 The movie is presented as a slasher movie, and while it uses many of the subgenres tropes, it also twists some of them around. It contains the standard POV shots of Buddy stalking his victims on a couple of occasions. I never understood this convention, personally. The whole concept is fait accompli. You know where it's going. You know how the shot's going to end (with little variation). It doesn't generate suspense (I refer again to Hitchcock's "timebomb" theory [aka "the desire/frustration theory of suspense"]). Maybe it worked the first few times it was used, but certainly not by 1987 and certainly not after. Also, the victims are all dispatched in different ways. This has always been solely to keep the audience from being bored. If a killer (serial or otherwise) has an effective death implement, one would think they would tend to stick with it. It's the same reason why if you start off a video game with a .22 revolver and you're finally able to upgrade to a nuke-powered shotgun or what-have-you, you would be reticent (not to mention pretty dumb) to go back to the revolver.

On the flip side, the action doesn't focus primarily on the "teens" (I hesitate to call them that, because they don't look like teens, but they act like teens, kind of) but on the conflict between the adult characters. I actually found this refreshing. It gives the film a slight 1970s horror feel, which is almost always welcome. The teens themselves are almost indistinguishable from each other, as if writer/director Rick Roessler didn't care whether they were in the movie or not. They also don't seem to want to get in each others' pants, get drunk, or smoked up. How odd. The young'uns won't come under direct threat until the third act (and then arbitrarily, because you need teen victims in a slasher movie – and now you know why they're not developed as characters). It's not typical of the genre, but it works. 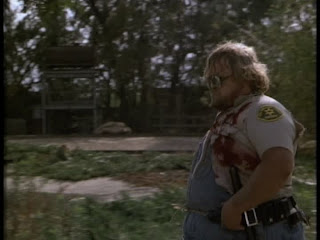 Slaughterhouse, regardless of its 1970s shadings, also keeps itself steeped in the 80s. There is some direly bad synth-rock that pops up whenever we get an establishing shot of the younger protagonists. The shooting of the horror video is presented in a devastating, soda-commercial-esque, kids-just-havin'-fun montage. I still found it funny. The big "Pig Out" party sponsored by radio station KFAT – get it? – features some of the most spastic 80s dancing ever captured on film (but sadly not the "Rerun", whose time I guess had passed by then).

The film borrows heavily (as any film with this setting and premise must) from both The Texas Chainsaw Massacre and Motel Hell. Buddy wears the rubber mask stolen from a victim a la Famer Vincent's glorious pighead and Leatherface's, um, leather face. Effigies fashioned out of animal remains festoon Lester's slaughterhouse. There are hints at cannibalism as the bodies start piling up. As an interesting aside, there is brief mention of Buddy having a younger brother that mysteriously disappeared. Nothing is ever made of this, but I found it to be a nice touch. And then there's Buddy himself, a Brobdingnagian man-child who, in fact, squeals like a pig. 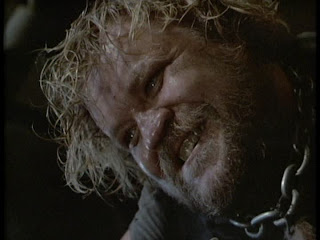 It's Buddy, funny enough, who is the center of pathos in the movie. He looks like one of the Moondogs crossed with Randall "Tex" Cobb in Raising Arizona. Nonetheless, he's portrayed as a sort of ani-man. He has a tremendous affinity for his pigs, and the inference we're lead to draw is that there's some bestiality going on. He kills, yes, but he doesn't really mean it, because he doesn't know better, and he's following his dad's lead anyway. He's a slightly less sociable "Lenny" with a giant cleaver. And it is his childlike demeanor that drives the humor of the film. It's gallows humor, to be sure, but humor nonetheless, and it comes from character, which makes it work. Consequently, Buddy (as all popular horror characters do) generates sympathy, and a modicum of empathy, for himself while feeling none for his victims. I think it would be hard to continue stories with this character, because he could very easily become self-parodic. Still, the final time we see Buddy in the movie, while not unexpected and highly improbable, was nicely satisfying.

MVT: Buddy is the most valuable thing here. I think the above paragraph explains my thoughts as to why.

Make or Break: The "Make" scene is when Buddy dresses up like a cop and takes a cruiser out for a spin. It's, by turns, funny and horrific and it cogently encapsulates the tone of the film.