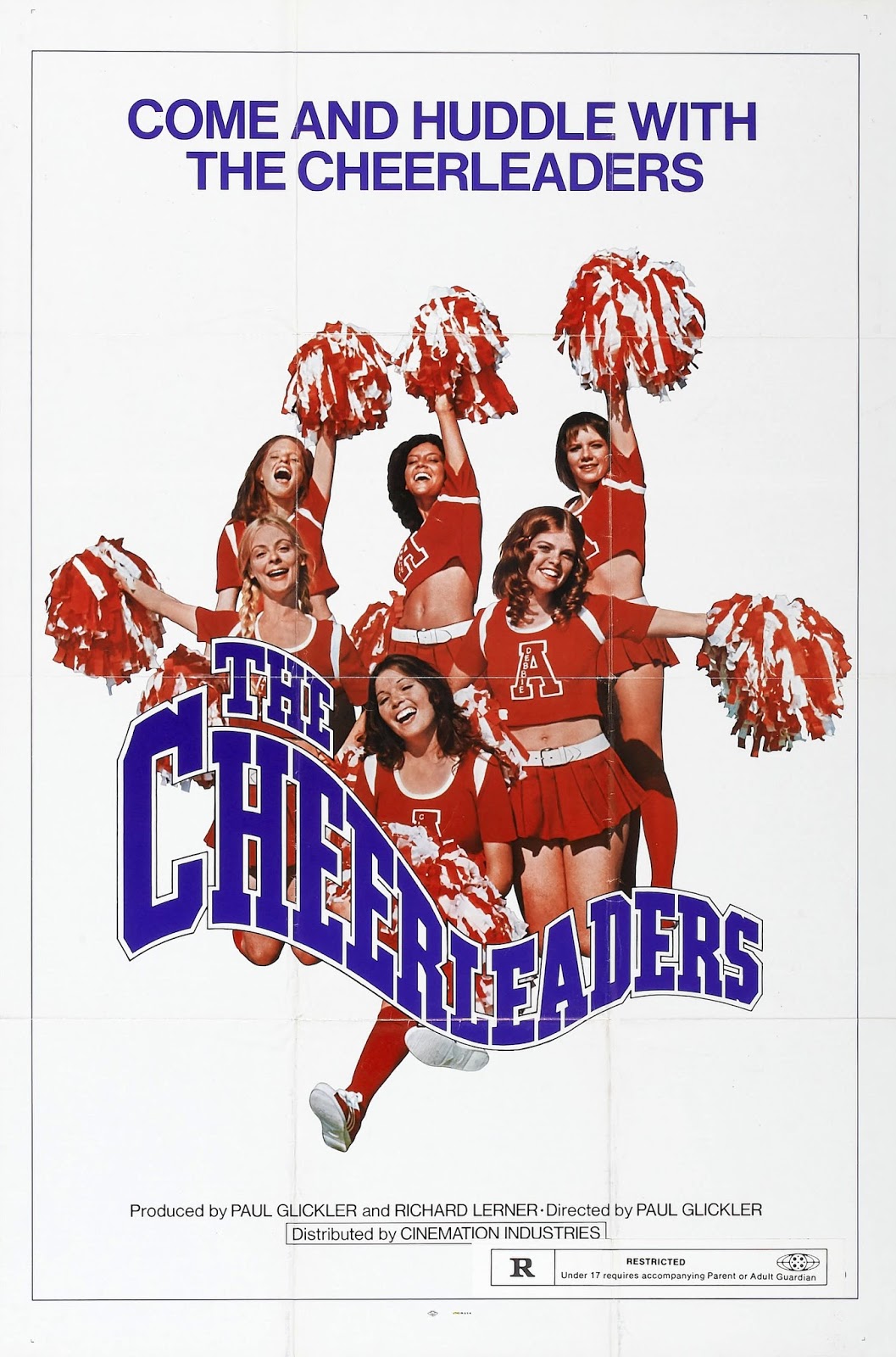 Young Jeannie has a problem: at fifteen years of age, she is still, tragically, a virgin. She figures the best way to lick this problem is by taking the advice of a couple friends and trying out for the cheerleading squad. She makes it, but her efforts to deflower herself at the hands of some virile young lad continue to be stymied when the squad captain Claudia has made a bet that she can foil Jeannie's noble plans for the entire season. Wacky hijinks ensue and require the cheerleaders to take off all their clothes as often as possible, all in the name of sexual liberation and freedom and America!

Oh yeah, the sleazy janitor is also planning to fix the next game, because someone always has to be fixing the game in these cheerleader movies. Unfortunately for him, the cheerleaders have their own plan to help the team by sapping the opponents of all their strength. Can you guess how? Remember, this was back in the days when football players were dedicated gridiron gladiators who never fooled around before the game and could have their strength instantly sapped by them by having sex the night before. Too bad the cheerleaders also had a big orgy with their own players, making everyone on the field so very sleepy! But wait! Is that a fourth string running back the other team has? The cheerleaders missed him! Can anyone but Jeannie come to the rescue and save Amorosa from the shame of losing a high school football game?

The Cheerleaders is unrelenting and indefensible sleaze. And predictably enough, to that we say, "Rah rah rah!" The biggest complaint that you can lodge against this film isn't that it features gratuitous nudity or horrible acting,. No, the biggest flaw in this film is that the cheerleading is really quite bad. Nothing rhymes. None of the cheers are catchy. Opening narration explains how the Amorosa High football team is on a winning streak and school spirit is at an all-time high. What could be causing this is a mystery. And though the film implies it's all thanks to the cheerleaders, when you actually see them cheer, you'll realize that the upturn in school spirit is still a mystery. The cheerleaders aren't even performing in unison. How can the team go on to win the big game when the cheerleading is so shoddy?

So you know, what with the cheering being so bad and all, it just sort of shattered the illusion of reality for me that this film could have otherwise created. Everything else is pretty true to life, after all, like how the cheerleaders drive around in their convertible sports car all the time in their cheerleader outfits and still doing cheers, even when they're just going to eat hotdogs, or how the cheerleaders are always having naked slumber parties, or how they always save the day -- usually by employing sex. These parts of the film take on an almost cinema verite reflection of real life which is undermined whenever we're asked to believe that these are the greatest cheerleaders in all the land. 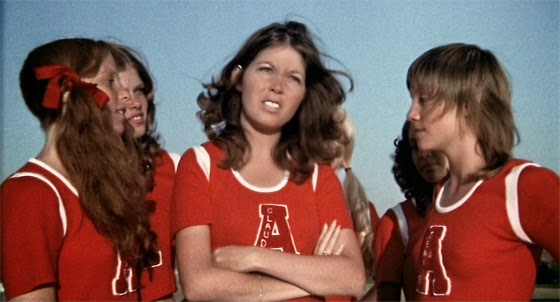 Needless to say, this is very much a "what you see is what you get" type of film, and believe me you see a lot. This film is a prime example of what you could get away with in the carefree and easy 70s that would get you locked up today. Consider, first of all, that the crisis presented to us is that a fifteen-year-old girl hasn't gotten laid yet. No one leaps up and says, "Well, you should wait until you get older anyway." Nah, the general reaction is more along the lines of, "Weird! Let's get you some sex!" In addition, you have older teachers, male and female, both getting it on with underage (according to the script, remember) girls, and that's cool, too. And then you have Jeannie's own dad who leers at his naked daughter from time to time before also having sex with one of the cheerleaders. And then you have the scene in which Jeannie's initiation to the squad involves her having to shower in the boys' locker room, just when the team comes running in with their minds on a gangbang. Har har har! And then Claudia teaches Jeannie that the best way to seduce thugs is to pretend you want to be treated rough. These are all valuable lessons for young girls to learn, of course.

Tasteless doesn't even begin to describe The Cheerleaders. But like most oddball skin flicks from the 1970s, there's such an exuberant..."innocence" certainly isn't the word I'm looking for...such a joyously perverse celebration of all things tawdry. If you are going to be offended, then you're better off being offended by the lack of a plot or the amazing absence of acting skill from every performer. But at the same time, you should just be ashamed of yourself if you sit down to watch The Cheerleaders and expect taut plotting, engrossing characters, and stand-out performances. If that's the case, then frankly you deserve to have sat through a scene of a fat guy in a jock strap crawling around on the floor while a cheerleader licks a baseball bat.

Since this is technically supposed to be a sex comedy, the movie does have to take time out from all the nudity for crude humor the likes of which would make even Benny Hill shake his head in embarrassment. Ho ho ho! The janitor is a peeping tom! Oh, the hilarity! Jeannie's dad is willing to let the cheerleading team stay over for a slumber party, and he offers them grilled wieners! And, um...well, really that's about it. Most of the gags involved cheerleaders eating phallic shaped food items or bending over. 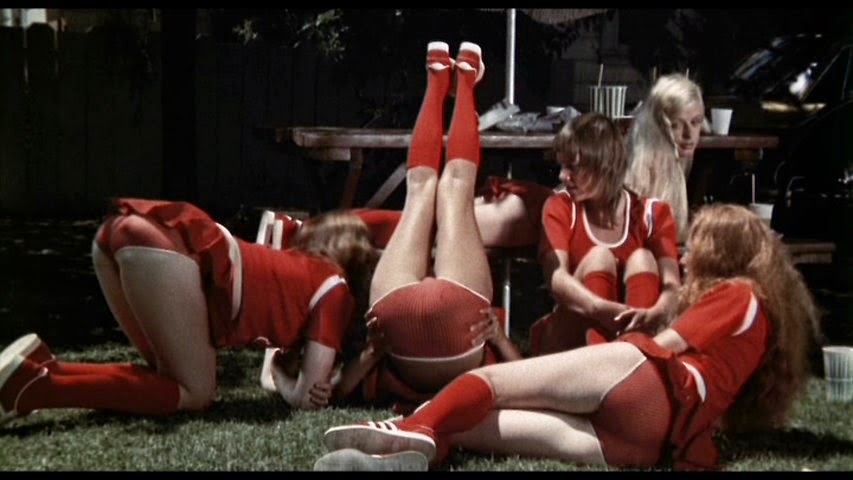 Curiously, almost no one form this cast went on to bigger and better things. In fact, most of them never went on to anything, period, and this remains the sole entry in their filmography. Cheerleader Kimbery Hyde went on to star in a couple of those naughty nurse movies, but the only familiar face, if you can call it that, is Pat Wright as the football team's coach. He starred in a stack of films including Revenge of the Cheerleaders, the hillbilly sexploitation comedy Sassy Sue, Caged Heat, I Spit on Your Corpse (yes, the sleazy follow-up to I Spit on Your Grave), Candy Tangerine Man, and Russ Meyer's Beneath the Valley of the Ultra-Vixens. In 1992, he got back to his roots with a part in The Bikini Car Wash Company. Curiously, almost all his roles cast him as a coach, a cop, or a creepy in-law.

As a skin flick, though, you'd really have a hard time beating The Cheerleaders. Or maybe, you wouldn't have a hard time beating it. The cheerleading outfits are tiny, but that's not of much concern since they come off in almost every scene. Everyone gets naked all the time, and sex is had in cheesy bachelor pads, fast food restaurants (nothing turns you on like have sex on a dirty deep fryer), car washes, locker rooms, trophy rooms, gardens, and well eventually you just lose track.

Make or Break: The willingness to commit to irredeemable sleaze without ironic armor or "we're all a satire" attempts to justify how tasteless it all is. This is about as "pure" as X-rated exploitation comes.

MVT: Stephanie Fondue as Jeannie. Not just because she's cute and willing to indulge this nonsense, but because she has a 70s glam rock mullet that would make Suzi Quatro proud.