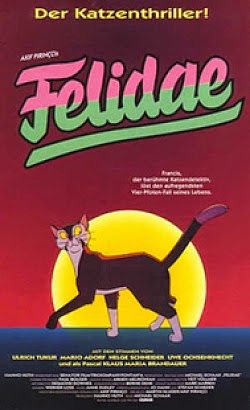 Francis (Ulrich Tukur) is a cat whose owner (the cats in the film refer to humans as “can openers”) Gustav (Manfred Steffen) has just moved to a new neighborhood.  Discovering a dead cat in his backyard, Francis joins up with local curmudgeon Blaubart (Mario Adorf) to unveil the killer and expose the truth behind it all.

Martin Schaack’s Felidae is an animated film (in case the fact that its main characters are felines didn’t tip you off, though I guess this could also have been something along the lines of Look Who’s Talking Now) based on a series of novels by Akif Pirincci (I surmise this film is adapted from the first book), and without giving too much away, I’m rather surprised it hasn’t been seen by more people or been talked about more than it has.  This film could easily stand shoulder to shoulder with the dynamic duo of mature-themed cartoons, Watership Down and The Plague Dogs (or frankly any others you would care to name).  If you’re a parent, I’m not sure this is something you should show the kids just yet, however (though I’m positive there are folks who threw it on for the kids assuming all cartoons are kiddie fare, and besides, if you’re reading this, I’m going to also assume you’re the sort who knows a bit about what you and your family watch before you watch it).  There is graphic violence, including beheadings and disembowelings.  There are cats having sex.  There are (perhaps the most disturbing element) scenes of live cats being brutally experimented on by Professor Preterius (the name a clear [and fitting] callback to The Bride of Frankenstein and portrayed here by Gerhard Garbers).  So, if these are things you’re uncomfortable watching, you will want to pick something else for family movie night (or your own personal viewing, for that matter).

Nevertheless, the adult components of the film are essential to the story, and I think had the choice been made to not depict these things in this manner, it would have done a disservice to the film’s themes.  Naturally, when you pair felines up with murder, the first thought in most people’s heads is “curiosity killed the cat,” and that certainly holds true in Felidae.  Francis is an innately inquisitive character, and he knows a thing or two about what makes cats (and people) tick.  This is summed up nicely in the opening moments when Francis comments that Gustav is a student of archaeology who makes his money writing trashy novels and moves frequently when the creative well runs dry.  But Francis knows this is little more than an excuse Gustav gives rather than dealing with his problems head on.  Francis also detects odors coming from upstairs that immediately set him on edge, but we also know there is no way he will resist the temptation to explore further, as with the killings.  This self-awareness is depicted and foreshadowed in Francis’ dreams.  In the first one, Francis is attracted to a door filled with pure white light (read: truth).  But inside the door, he encounters a faceless doctor (guess who?) who gifts him with a diamond-studded collar that transforms into a choking shackle and set of chains that drag him down to Hell.

More alarming (yet equally in line with the above, and you can thank me later for not using the term “shocking”), is our introduction to the cult of Claudandus (a fabled cat martyr/god; the name being Latin for “he who must be concealed, locked away”), whom we are introduced to during one of their meetings.  The flock, lead by Joker (Ulrich Wildgruber), fling themselves into an apparatus which violently electrocutes them.  Whether they are killed or just stunned by this action, I’m not fully sure, because killing one’s congregation is not a great way to keep it, but the cats who go through this masochism are not shown moving (or breathing) afterward.  We know that when a religious leader is shown spewing fire and brimstone in a film, he/she is typically either crazy, false, or both.  The cats that are in the cult are curious about Claudandus, about religion, and this will get them knowingly hurt and very likely unknowingly killed.  The religious facet ties into the entirety of the film, not simply as a group of misguided cats being manipulated by forces higher up, but as the embodiment of the power of ideology/theology itself.

Sexuality ties in strongly with both of these elements, too.  The whole idea of being in heat, of rutting with whoever is available and in proximity, is important to the film’s plot.  The cats being killed have not been neutered.  On the one hand, this plays into the idea of curiosity, since these cats cannot help but screw when the first opportunity arises with other cats about which they know nothing.  The very fact they do this places them in danger (for a couple of reasons).  On the other hand, there is the notion of the religious right’s classic condemnation of unchecked sexuality.  Taking out of the equation the idea of what constitutes cat morality (we already know cats have an idea of Hell from Francis’ nightmares) or fidelity, the violation of this theological edict conceivably damns a given cat’s soul.  In Felidae, casual sex can lead to physical and spiritual destruction.

Even if none of my quasi/pseudo-intellectualizing draws you to this movie (and there are other things going on which may; I just don’t want to give away the store, as it were), the film is structured and told in a visually interesting fashion.  Most shots not involving closeups on cats are framed with Dutch angles.  It’s fairly rare to see perpendicular or parallel lines in much of the film’s compositions, and much of the scenery appears twisted in some aspect of another.  Bright lights are also a rarity, lending the movie some verisimilitude and reinforcing its dark underpinnings.  There are also a lot of bird’s eye view perspective shots (an indication of a deity observing and judging the characters as well as a reference to the characteristic of felines to sit up high on furniture/appurtenances looking down on the world around them).  Further, the film has the distinct flavor of a hardboiled detective novel.  A character is presented with a crime and feels compelled to discover the criminals.  Secondary characters appear to both menace the main character and throw him off the trail (most notably the marvelously designed Kong [Wolfgang Hess], who reminded me of the feline version of Chuck Jones’ Marc Antony character).  Others provide clues, the doling out of which places them in immediate danger.  The protagonist alone can follow the convolutions of what’s going on, the only one beside the antagonist who can put the pieces together in the proper order.  And ultimately, this protagonist is the only one who can confront the antagonist with the truth, though the answers will likely bring a bittersweet resolution.  Slightly lighter in tone than the aforementioned anthropomorphized animations, Felidae still packs one hell of a satisfying wallop.

MVT:  The basis for the narrative is intriguing and chilling, and I feel that it strengthens even after the main mystery is solved.  In other words, it’s not a one-trick pony, and it will reward on future viewings.

Make or Break:  When the Claudandus cult makes its eyebrow-raising entrance, you instantly know there is much more going on in this film than might be expected.