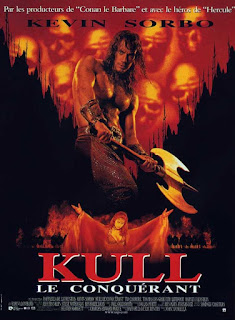 If you ever wanted a movie where Kevin Sorbo is shirtless most of the time this is the movie for you. This 1997 sword and sorcery film was originally to be a Conan reboot but Kevin Sorbo did not want reprise Arnold Schwarzenegger's role. So it was rewritten using another Robert E. Howard character Kull, an Atlantean pirate who becomes a introspective ruler. Thought in this film he is less introspective and more believes in prophecy, armed combat, cracking jokes, and liberty for all.

The movie opens with the history lesson about how demons used to run the world and world was covered with flames. Then the god of ice came, put an end to the demons, and left one burning flame to remind humans of godless times. Of course this flame will never be used to create conflict in this movie, really.
We then shift focus to our hero Kull and he is taking part in the worst job interview ever. Please do not get me wrong, I have been in a lot of job interviews where if they replace the questions with let's see how well you can beat the hell out of other people with a weapon would be fun. But in Kull's case he is unable to get the job because he is not of noble birth.

This awkwardness is interrupted by news that the king has lost his mind and is killing all his heirs. So Kull follows the general of the noble born guard and ends up killing the king. As thanks for mortally wounding him his last act is to make Kull king. This annoys the general and a foppish noble as thanks to the previous king's murder spree they were the last two in the line of the crown. So Kull moves quickly to annoy even more people before be crowned king and frees a priest of the ice god. He also allows the people to worship what gods they will and pisses off the head priest of the order of dicks.

In between an assassination attempt and scenes where Kull learns that he can't change the law carved in stone there is a love story. Kull and the court fortune teller slowly be come a couple and give away most of the plot with tarot cards. With is weird because, as I understand it, Robert E. Howard's characters tend to avoid the supernatural and rely more on their wits and massive muscles. But enough of that for now let get back to the people upset with Kull and are clueless as to how to kill him.

Enter burned wizard guy and his silent ape monster helper. He has a way to take out Kull in a way that his muscles and wit will not be able stop. He will reawaken a long dead demon sorceresses who will marry and kill Kull. The plan goes off more or less as expected. She seduces Kull, marries him, and then she changes her mind and drugs him instead of killing him. As a bonus, she sets up the court fortune teller as Kull's murderer.

This forces the plot to speed up from crawling to crawling with an energy drink. In short, the demon reveals to Kull she wants him as her sexy consort as turn the world into a hell on Earth. He says no and escapes with the help of the priest of the ice god, who is also the fortune teller's brother. The two of them sneak back into the city, find that a minor character, who they couldn't be bothered to give a name to, is killed and is taking Kull's place at the funeral.

So the plot throws out an action scene where the fortune teller is saved, the high priest of the order of dicks is killed, and the trio escape to find the lost island of the ice god. Kull knows of an old pirate friend who somewhat willing to give him a ship for this quest. However, once they get out to sea the pirate drugs the trio and is about to turn around and sell Kull to the demon. So Kull escapes, steals the ship, and they find the lost island of the ice god.

Back in the kingdom, the demon torments the wizard for forgetting his place. She also kills the foppish noble for being annoying and charges the general with finding Kull and the lost island of the ice god. She knows where the island is and gives the general the ability to catch up. Oh and the general is now trying to find a way to kill both Kull and the demon so he can be king.

Thanks to plot convenience the lost island of the ice god is found. Kull and friends go looking around a cave blasting cold air and find a statue of the ice god. The fortune teller consults her tarot cards and is told to go topless before the god statue and becomes the bearer of the ice god's breath. The general shows up because it has been five minutes since the last action scene and kills priest of the ice god and the ship's crew. After beating Kull in a sword fight, he kidnaps the fortune teller and leaves Kull to die in an easily escapable situation. However the general does not know Kull and makes his escape by drowning himself in freezing water because it is more heroic to escape while suffering hypothermia.

This brings us to the end of this fantastic adventure romp. The general claims the fortune teller and Kull are dead. The demon becomes more demonic as the solar eclipse approaches and forgets to kill the general when Kull sails up for the end of the movie.

Despite my petty complaints this is not a bad movie. It is also not a great movie either. If you are a Robert E. Howard fan and you haven't seen this yet go hang your head in shame. For everyone else, it is a great movie if it comes up on cable or streaming movie services and you have some time to kill.

MVT: The sound track for this movie is amazing and is one the only reasons why I have re-watched this movie.

Make or Break: Break, a lot of things in the movie that need to be explained like who characters are and what the hell is the ape monster thing is.