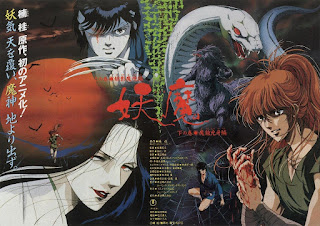 “In the age of wars, innocent civilians’ blood sank into the earth.”  Ninja Hikage (Kenyu Horiuchi) and Marou (Kaneto Shiozawa) stand on a desolate battlefield as men strip the arrows from the scattered corpses.  Marou has a bit of an episode and runs off after smooshing the sodden ground between his fingers.  Shortly thereafter, the leader of their clan is murdered, and Hikage is dispatched to track down Marou, who may or may not have had something to do with it.  Meanwhile, all manner of demons (read: yoma) are appearing, feasting on human beings and trying to take over the world.  More or less.

Takashi Anno’s Curse of the Undead: Yoma (aka Blood Reign: Curse of the Yoma) is a two episode OVA (Original Video Animation) based on a manga by Kei Kusunoki (presented outwardly as one film for its video release [at least in America], though it’s really just the two programs [including opening and closing credits] shown back to back, but since I watched it, I’m counting it as one).  Consequently, I would bet my bottom dollar that this anime is a massive abbreviation of the original story (one of the things I always found fascinating about adaptations of manga, one of the most decompressed storytelling styles in the world, is whether they leave out large chunks of the story [usually things like exposition] or if they just go off in a direction inspired by the original; for example, Osamu Tezuka’s Akira manga is over two thousand pages long, while the anime is a little over two hours, but it’s still a superlative adaptation [it doesn’t hurt any that the original artist was also the film’s director]; I’m hard-pressed to say which version I prefer).  Marou is introduced with nary a word spoken, and from the way he acts at the opening, we might be led to think that he’s the protagonist.  Instead, he’s the villain, but even this isn’t made clear until much further down the road, even though it’s not treated like a big reveal.  We’re given glimpses of Marou and Hikage playing as children, but it’s always the same scene, and nothing of any consequence happens in it to either move the story forward or provide any insight.  This is especially confounding, because this scene is in heavy rotation in the film.  The anime leaps forward in chunks of time (hours, days, years), occasionally making light attempts at some sort of characterization, very little of which has any tangible impact.

The film is ostensibly about the bonds of friendship and how they are torn asunder.  Nevertheless, the relationship between Hikage and Marou has no substance to it; only hints at subtext.  As a result, it makes it difficult to invest any sort of emotion in the proceedings.  It doesn’t really help any that these two characters never have any meaty interactions after the chase is on, so outside of the constant flashbacks to the pair as kids, the only sense of weight in regards to their friendship comes in the form of Hikage’s obsession with finding Marou.  He is single-minded to the point of disobeying his boss, in fact.  Simultaneously, the relationship between Hikage and Aya (played by Hiromi Tsuru and Mina Tomunaga) is meant to bestow some alternative to the platonic love between Hikage and Marou.  I should state here (and you may have picked up the hint from the actor credits) that Aya is, technically, two characters.  The first is a simple villager with a death wish.  The second is a fellow (novice) ninja who follows along on Hikage’s journey (perhaps a death wish of another kind).  Both love Hikage in an immediate sense that never rang true for me, but when time is of the essence, best to cut to the chase, as it were.  Hikage is injured from an earlier fight with his friend, causing him to wear a bandage over his right eye for part of the story.  Likewise, the first Aya’s face is disfigured on the left side.  There is a circularity to this visual distinction that I quite like, but I won’t get into details for fear of spoiling anything.  The point is, everyone in the film is damaged (including Marou) by the war-ravaged world they inhabit, and the struggle to connect with another person is, not only the most important thing in their lives, but also the most damning.  That’s not to say there isn’t a kind of happy ending to the story, but it is more a silver cloud with a grey lining than the opposite.

This anime, to absolutely no one’s surprise, is loaded with elements of body horror.  Corpses are found disemboweled.  Throats are slit with a gush of arterial spray that would make Tomisaburo Wakayama green with envy.  Innards are shredded via oral application of Hikage’s nifty, Wolverine-esque claw gauntlet.  Yoma erupt through the flesh of their human forms to showcase the corrupt monstrosities hidden within.  And this is, pardon the pun, the real meat of the film.  The Japanese absolutely love showcasing grotesque, slimy, hirsute things tearing through and transmogrifying humanity down to its core, and this speaks of a commentary (intentional or not) on the perverting of human beings by the world they inhabit (which, by extension, we read as our world).  Very rarely are the protagonists in horror anime left unscathed by this condition, and Curse of the Undead: Yoma is no exception.  Here the criticism is on war and what it does to both the participants and the bystanders.  The war between humans becomes a war with yoma.  Still, the humans continue their own conflicts, even drawing the yoma into it directly, further degrading situations and characters already at base levels.  This theme is certainly nothing new in anime (or film in general), but it neither adds to nor detracts from this particular narrative.

Ultimately, and despite my criticisms, I found myself enjoying Curse of the Undead: Yoma.  It moves along at a nice enough clip, the creature designs are interesting if somewhat uninspired, and there’s action enough to spice up the basic story the filmmakers seem to go to great lengths to ignore.  This wouldn’t be a very good introduction to anime for some people, because it does have some of the more impenetrable anime elements non-Japanese viewers may find a bit too demanding.  That said, I found myself going with the flow, and the runtime passed by breezily.  I can think of worse ways to curse a film than damning it with faint praise (see what I did there?).

MVT:  There is a foreboding atmosphere at work in the film that maintains interest through the audience’s curiosity as to who will fall the hardest and how far they will drop?

Make or Break:  When the first big boss monster shows up and tells Hikage what the plot is (which is just as subject to change as a pair of socks), you’ll know whether the trip has been worth it for you or not.