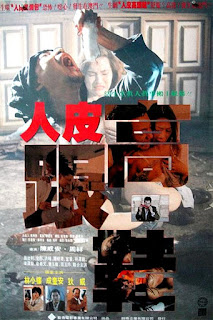 Hey, let’s talk about my feet!  For as long as I can remember, my feet have been grotesquely wide (around a triple E width, if that helps any).  The last pair of normal sneakers I had were Welcome Back Kotter ones when I was a kid (it said, “Up Your Nose with a Rubber Hose” and other snazzy bon mots around the sides).  I could never wear Chuck Taylors, because my feet poured out over the tops of the soles (but fuck if I didn’t try).  My first pair of Doc Martens were regular width (because that’s all that anyone sold, and this was before they were available on every street corner in the world, and they were expensive as all hell compared to the shoes I would normally buy), and the breaking-in period was pure hell.  Since then, I’ve discovered companies that that specialize in wide width shoes, but it’s still a crapshoot buying them, because you have to buy them over the internet (the sneakers I have been buying this way have started giving me corns, so now it’s back to the drawing board).
And then there’s the flatness of my feet.  I’m fairly convinced that I have no arches to speak of, so, of course, I have to wear special arch supports.  The beauty of these babies is that they’re made of plastic, so they tend to give you shin splints until you get used to them.  They also make it sound like you’re walking on ducks, they squeak so much.  To put it simply, footwear and I don’t get along.  I don’t even think the human leather shoes of Wai On Chan, Cheng Chow, and Chiang-Bang Mao’s Horrible High Heels (aka Ren Pi Guo Zheng Xie aka Bloody Shoe) would fit me any better than any others do.  It doesn’t help that I can’t walk for shit in high heels.

Lee Kang (Hung Fung) is the proprietor of a small shoe cobbling business.  He’s also a degenerate gambler of the lowest order, and, after getting knocked out during a row over his habit with young Sherry, he’s skinned alive by a masked lunatic (whose identity is obvious, even before you meet him without the mask).  Lee’s son Tien (Lam Chak-Ming) comes home from university with hoochie mama Wendy (Suen Tong), and he almost seems to give a rat’s ass about finding his missing father.  Wang, one of Sherry’s co-workers, finds a cheap source for fantastically soft leather (have you guessed yet who the murderer is?) and has some dealings with his nephew Ah-Nan (Siu Yuk-Lung), who works for triad boss Kuen (Shing Fui-On), a man very interested in the wholesale of women’s shoes.  Is that enough for you?

This film could have some interesting things to say, and it almost does.  For example, there’s the aspect of mad love going on.  Sherry pines for Tien (why is anyone’s guess, as the man is blanker than a sheet of copy paper and has fewer sides), and the entrance of Wendy makes her go a little crazy (there’s even a nice cat fight just to prove this).  Sherry goes to extreme lengths to get Tien, naturally, because he’s the man she deserves, and she was there first.  Wang pines for Sherry, and he also will go to extreme lengths to have her.  He even has a photo of her at home with her mouth cut out (you don’t have to wonder why; they make it excruciatingly clear in the movie).  I can’t imagine that being in any way satisfying, and I can only cringe at the abrasions one could incur with such a prop.  However, Sherry ultimately rejects Wang, which makes him go even crazier.  But just being in Wang’s presence is enough to infect Sherry with Wang’s insanity.  That she winds up as she does in the end stems not only from her commiseration with this guy but also (and more importantly) from her abuse at the hands of men in general.  Sherry is the embodiment of puppy love turned inside out and gone dark.

Then, there’s the idea of “skin trades” (and not just in terms of animals, unless you count people as animals, which is fair play) and how fashion feeds into it.  Consumers and vendors love the human leather shoes.  Sherry and her fellow employees love working with the leather, and the money they make off their sales thrills them.  During the first human skinning, the killer exclaims, “I started my fortune with this leather.”  As in films such as Eating Raoul, this guy discovers discover that not only are people as easy to kill and use as animals are but they’re also cheaper and of a higher quality.  It’s just that this movie hasn’t a humorous bone in its body.

Being a Category III film, Horrible High Heels does its level best to fulfill the promise of that rating.  It opens, for no narrative reason whatsoever, in a slaughterhouse, and we get to see cows being killed and cut up in graphic detail.  That’s about as subtle as this film gets.  There is plenty of rape for everyone, and this is combined with humiliation (as if rape, in and of itself, isn’t humiliating enough).  One victim is micturated on.  Another is stripped, beaten, made to walk on all fours like a dog, and forced to touch herself with amputated body parts.  This isn’t to say that the consensual sex scenes are any more pleasant.  They are as softcore as can be, leaving nothing to the imagination (well, a little), and they are just as skanky as any of the rape scenes.  They have a grimy aura to them, and the participants look dazed and sweaty.  Even when the characters want to be having sex, they still look like they couldn’t be further away.

The greatest fault of Horrible High Heels is that it’s incredibly scattershot to the point that you can completely believe that this thing was made by three directors, because it doesn’t follow any of its storylines coherently.  It also doesn’t really give a shit about what’s going on in any of them.  The human tanning angle is dropped halfway through the film.  The Ah-Nan/triad aspect doesn’t relate to the rest of the film except by the thinnest of threads.  The search for Lee that started this whole thing comes up only sporadically and with as much gusto as a nonagenarian’s exercise routine.  The characters change into completely different personalities at the drop of a hat.  The cops are completely subplot material until the end, when they suddenly become action heroes, just because (as does Tien in one of the more amusing sequences of the film).  With how salacious this movie is, it’s astounding how stultifying it manages to be.  If nothing else, its title at least delivers on two things: There are high heels in the film, and it’s horrible.

MVT:  The gutter-level sleaze.  Come on, you were watching this for some other reason?

Make or Break:  The opening scene in the abattoir may put some off their feed and spoil their libidos.  Then again, it may kickstart others’ engines.