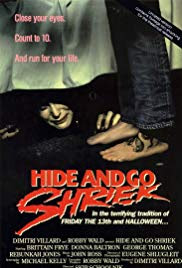 When you’re a horny teen desperately looking for a place to party, you’ll go anywhere you can to pound cheap beer and try to score with your boyfriend or girlfriend.  God knows how many odd locations I’ve gone to all in an effort to escape parental authority and take part in some juvenile behavior with my closest friends.  The group of teens in the late period slasher, Hide and Go Shriek, choose, of all places, a furniture store to party at.  After store hours, of course!  Now, we never had a furniture store available to us, but I’m certain my friends and I would have jumped at the chance to drink and get wild in such a place.  So, this location doesn’t seem like an odd setting for a slasher movie to me.   Luckily, my friends and I were never stalked and chased by a psychopathic killer through our party spot.  The same cannot be said for the kids in this film; and if that’s the tradeoff for getting to drink and screw in a furniture shop after hours, then you can have it!

The group of kids in Hide and Go Shriek are made up of your stereotypical teens in slashers.  We have the prankster, the creep, the nerd, the slut, the virgin, and the couple in love.  Being that it’s the late 1980’s, we also get some amazingly bad fashion and hairstyles!  The clothes are mostly baggy and loud.  One character is even wearing a pair of dinosaur earrings!  As expected, the hair on the female cast is BIG and the males are a mix of mini-mullets and spiked hairdos.  One of the male characters seems to have modeled his look after the 80’s fictional character, Max Headroom.  The character even wears his sunglasses in doors…at night…Big Corey Hart fan, this guy.  The cast that make up the teens are mostly unknowns.  The only face I recognized was Sean Kanan, who plays John.  Most will know him from The Karate Kid Part III, as “Karate’s Bad Boy” Mike Barnes.  There is really only one cast member that stands out from the rest and that’s Bunky Jones, but I’ll come back to her later.

The film opens with an anonymous character applying makeup in the mirror.  In the next scene, the character is shown picking up what may or may not be a transgender prostitute and later murdering the prostitute in a back alley.  It’s quickly established that there’s a killer on the loose and we’re not certain of their gender.  Clearly, an attempt to keep us guessing who the killer is.   We’re then introduced to our group of teens and then we’re off to the furniture store for some post-graduation partying!  As odd as this location may seem for a party, it does make for a great setting for a slasher film.  Because it’s after store hours and the teens want to avoid drawing any attention to the shop, the interior of the store is dimly lit, creating a lot of shadows.  There are also several mannequins spread about the store which keeps the viewer guessing as to whether or not it’s the killer.  When the killer does arrive on the scene we get POV shots of the killer lurking about and peeping in on the teens as they strip and get down to business.  This all adds up to a pretty unnerving setting which makes for some genuinely creepy moments.

Slasher fans who expect their slashers to be bloody and gory shouldn’t be disappointed with this one.  When the killer starts attacking the teens, the film doesn’t shy away from the gruesome details.  There are two standout deaths in the film.  One where a character is impaled onto an art sculpture and the second being a decapitation by freight elevator, thanks to some early special effects work from Screaming Mad George.  Some may feel that the body count isn’t high enough.  Personally, I found there to be enough stalking and slashing to satisfy my needs as a fan of the slasher sub-genre.

Hide and Go Shriek is not without its issues.  Firstly, it’s a darkly lit film.  Too dark, in some scenes.  I realize it’s intended to be dark so that the killer can hide in the shadows, but it can be difficult at times to make out what exactly is on screen.  I can’t even imagine what it must have been like to watch this on VHS back in the day.  Also, after the initial setup, the film drags a bit until the killer begins to attack the group.  The group of teens work within the tropes and trappings of the slasher genre, but individually they’re not that interesting.  The actors are mostly serviceable but no one really standouts until the final act and that is when Bunky Jones, playing Bonnie, gets her moment to shine.  Once Bonnie discovers the mutilated corpses of her friends, she comes completely unraveled.  Bunky Jones’ portrayal of a teenage girl who is terrified beyond belief is one for the ages.  Some may find all of her shrieking and whining to be shrill and overbearing.  I, however, found her performance to be a highlight of the film and I appreciated that she swung for the fences with her depiction of the hysterical Bonnie.  Her reading of the line “I DON’T UNDERSTAND!” has to be heard to be believed.  Highly entertaining.

I don’t think anyone would claim that Hide and Go Shriek is a top-tier slasher.  Not even the hardcore slasher fans.  It is, however, a solid entry into the sub-genre with several entertaining moments scattered throughout the runtime.  It has an eerie setting, bad fashion, gory murder scenes, overacting, unconventional moments, and an ending that reaches giallo levels of absurdity.  This film doesn’t attempt to reinvent the genre, but it does enough different to make it a memorable watch and not come off as just another disposable slasher, which there were more than enough of during this period.

MVT: Bunky Jones.  She goes for it in the final act!

Make or Break Scene: The reveal of the killer.  This will likely make or break the movie for you.