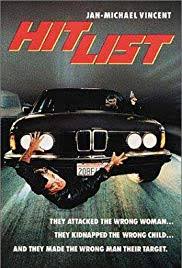 If you’re a child of the 80’s and had an obsession with movies, you know what a wondrous place the video store was at the peak of the video rental boom.  Walking through aisles of VHS covers and having those lurid covers tantalizing your preadolescent mind was quite an experience.  It almost gave you a feeling that you were somewhere you shouldn’t be.  The VHS sleeves for movies like Zombie, I Spit on Your Grave, and Driller Killer will forever be imprinted on my brain.  Then there were the odd or curious looking box art.  The ones that had you guessing what they were about and what type of movies they were.  Films like Happy Birthday to Me or The Exterminator had interesting but somewhat ambiguous covers.  If it weren’t for them being shelved in a specific section of the store, you weren’t sure what you were in for.  One such film, for me anyway, was Hit List.  The image of the car running over a man always piqued my curiosity.  Was this a horror film?  An action film?  What was it?  Once I discovered it was directed by William Lustig and involved a psychotic hitman played by Lance Henriksen, I had to track it down.  And the fact that this movie remains available only on VHS makes it that much more curious.

Essentially, Hit List is a crime-thriller with flourishes of action and horror.  After a gangster is arrested for drug trafficking, he’s forced to turn state’s evidence and testify against his criminal boss.  The mob boss, worried that his lieutenant will rat him out, decides to put a hit out and ensure that no testimony is made; except that the hitman makes a vital error and goes to the wrong house during his assassination attempt.  After disposing of a man and woman he assumes are federal agents providing witness protection, he kidnaps a boy he believes to be the son of his target, whom he can’t find anywhere in the house.  This sequence of events sets in motion the revenge / rescue angle of the film and will make up the majority of the runtime going forward.

Jan-Michael Vincent plays Jack Collins, the family man whose son has been kidnapped, wife attacked, and friend murdered during the home invasion.  Collins is hell-bent on rescuing his son and finding the person responsible for turning his life upside down.  In order to make this happen, he’ll have to recruit the help of the gangster turned informant and intended target, Frank DeSalvo, played by Leo Rossi.  DeSalvo has his own vendetta to settle, now that he knows his boss (Rip Torn) tried to have him whacked.  Together, Collins and DeSalvo will have to fight off mafia thugs, elude the police, and battle a highly trained killer in order to save the kid and win the day.

Just like his prior films, Lustig’s cast for Hit List is made up of recognizable character actors.  Lance Henriksen, Leo Rossi, Rip Torn, and Charles Napier, who plays the lead FBI agent, are all familiar faces to movie fans and they all do a solid job in their respective roles.  Henriksen and Torn, in particular, are a lot of fun in their over-the-top performances as villainous characters.  The only issue with the cast is the leading man role, played by Jan-Michael Vincent.  Most will probably know Vincent from the TV show, Airwolf.  According to a 2008 interview, Lustig states that Vincent was drunk during the shooting of the film and it’s pretty apparent from the moment he steps onscreen.  He seems to struggle delivering his lines and I think you can even see him have trouble staying upright in some scenes.  In addition to this, he just simply can’t emote the grief that is necessary for his character.  When it’s explained to him that his wife is in a coma and that she has lost their unborn child, Vincent’s reaction to this soul-crushing news seems more appropriate for someone who has just been told that their favorite flavor of ice cream has been discontinued.   Lustig does his best to limit Vincent’s dialogue and shoot around his embarrassing performance, but there’s only so much you can do when your leading man is a disaster.  Jan-Michael Vincent almost sinks this entire film.  Fortunately, the rest of the cast brings it and a strong third act saves this movie from being a dud.

In that same interview, Lustig admits that he needed work and that this project was a director for hire job.  It definitely has that feel when compared to his earlier efforts, such as Maniac and Vigilante.  Hit List doesn’t have the same grit or nihilism that those films had.  Also, this film was shot in sunny Los Angeles instead of the rough streets of a pre-Giuliani New York City, where Lustig filmed his previous movies. This gives Hit List a more polished aesthetic, overall.  Still, Lustig delivers on the violence and action set-pieces, especially in the finale of the film.  There are a few memorable sequences that occur within the film.  There is a scene where Henriksen slips into a prison like a ninja and assassinates a potential witness after he takes out the prison guards.  There’s a fun shootout that takes place in a laser tag arena.  And there’s the standout car chase that eventually leads to a crazy sequence where Henriksen’s character is hanging from a truck as he tries to kill the driver.  I don’t want to spoil the end of this wild scene, but let’s just say that there is truth in advertising in regards to the VHS box art for this movie.

Nobody would claim that Hit List is one of Bill Lustig’s best films; including the director himself.  It doesn’t have that grindhouse feel of his earlier films and it doesn’t have a screenwriter like a Larry Cohen to inject some social commentary into the film, as he did for Maniac Cop.  And it certainly doesn’t help that your leading man is blotto through the film’s entirety.  Lustig and the supporting cast manage to somehow save this movie from being a complete disaster.  It’s a testament to Lustig’s skills as a director that he was able to salvage this film from what must have been a difficult shoot and turn in a decent action-thriller.  It may not be a cult classic, but Hit List deserves better than to linger in VHS obscurity.