Starring: Peter Fonda, Jerry Reed & Helen Shaver
Directed by: Peter Carter
In this Canadian trucking actioner, big rig hijackers make the open road a dangerous trade for independent long haul drivers. It is especially perilous for the dimwitted as such High-Ballin' begins with a trucker falling for the obvious ruse of helping a not-so-hot stranded female then getting accosted by ski-mask wearing, gun-toting thieves. Physically intimidated and intellectually overmatched, the indie truckers feel the only way to save their lives and their livelihood is to sell out and sign up with King Caroll, a commercial trucking outfit with enough security to protect them all.
Indie trucking lifer Duke (Jerry Reed) wants no part of King Caroll, shunning any and all offers to join the commercial way of life. Duke plans to make one last big run to setup his family and turns to his former trucker pal Rane (Peter Fonda) to assist him with it. For whatever reason, Rane left the trucker scene behind and is hesitant to get involved again; he much prefers to roam aimlessly on his motorcycle in some sort of flight suit getup and pilot's cap. Although, Rane doesn't stray too far as a romance develops with tomboy ratchet girl Pickup (Helen Shaver). He's soon pulled into this hijacking drama after Duke's shot and left for dead.

Out for revenge, Rane uncovers that the hijackings are actually masterminded by King Caroll in an effort to scare all the truckers into his fold. To keep him from going to the authorities, Rane's longtime bloodthirsty rival turned Caroll crony Harvey (David Ferry) kidnaps Pickup as a power play. With no where else to turn, Rane must unite the remaining indie truckers together to takedown King Caroll, rescue Pickup and save their business. 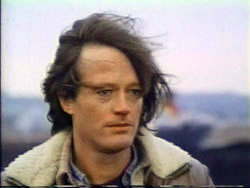 High-Ballin' reminds me of a brawler pulling his punches rather than firing off haymakers. The film has all the ingredients to make a fun, exciting little trucksplotation movie -- a quirky title, awesome theme song, machine guns, goofy thugs, the Fonda, Jerry Reed, superb poster artwork, crowbar fights -- but it never fully embraces these elements. Instead, we get all too short bursts that feel like the filmmakers are dipping only a toe in the water because they're afraid of getting wet.
For instance, it seems like we're headed to a great place early in the film when Fonda ups the ante of a boorish "let's step outside and talk about this" fight by suggesting they fight with what appears to be crowbars. Even better, Fonda wields two crowbars at once like some kind of jedi swashbuckler! Except, this fight lasts all of maybe five seconds (and that might be pushing it).
The same truncated manner plays out with the rest of the action. We never really get much of a truck chase for a film about hijacking 18-wheelers. The hijackers pack machine guns that are used more so as clubs than bullet-spitters. A quickdraw standoff between Rane and Harvey toward the end begs for a Spaghetti-style tinge as opposed to the minimalistic approach implemented. It's these fleeting moments that raise the film a hair above being completely average. Ultimately, this is a picture that, if that pun can be excused, is steering to stay in the middle of the road. Make or Break scene - I've gone back and forth, but I'm selecting a hairline make. The scene that barely makes High-Ballin' is the diner scene toward the start of the film shortly following the first hijacking. This scene solidly develops the world of the truckers and the anxiety surrounding them. It establishes Duke's old school personality and paints him as the leader of the independents. There's ample cheesiness on display as tempers run high (and homophobia overkill) and Fonda's emoting a general unintentional goofiness that made me laugh.
MVT - Jerry Reed, hands down. Reed's value is attributed both to his performance and music contribution. He delivers the best performance. It's a familiar one, of course, but Reed plays Southern-fried very well as evidenced through his filmography with pictures to his credit like Smokey and The Bandit. High-Ballin' would have been better off centering the story on Reed's Duke and relegating Fonda's Rane to secondary position. Also, Reed's renowned for his musical artistry in many films, composing songs for a number of films. The High-Ballin' theme ("High Rollin'") is utterly, air-strummin' fantastic and it really might be the best thing about the entire movie.
Score - 5.75/10
Posted by They Call Him Chad at 2:14 AM