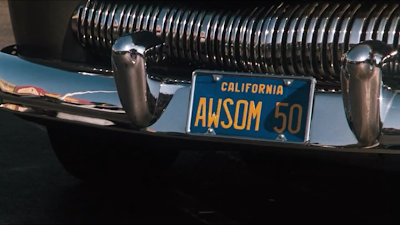 I'll tell you who's awesome, the guy with the scissors and the pizza, he's awesome!

It's hard not to love a film where the hero cuts his pizza with a pair of scissors. Let that little factoid sink in for a second, Marion "Cobra" Cobretti is such a god damn loose cannon that he cuts his pizza with a pair of scissors. This is a man who can't do anything normal. He has to drive a vintage car. Cobretti has to have a gun with a custom tip handle. A health nut, that's what makes this man different. Or, what makes him different is that he's a rebel who can't get along with his bosses. Lest we forget, he's also different because he doesn't shop at King's Grocery. There's also his license plate that proudly proclaims both his car and he are awesome. I'm sure that when the film was being put together each of these traits were thought of as cool little additions. When added up they equal one hilariously over the top quirky character. But what really makes the character is that Sylvester Stallone isn't in on the quirk. He plays Cobretti as straight and as seriously as possible, because you know, it's only natural for a man to cut his pizza with a pair of scissors.

Let's get one thing straight, Cobra is a pretty awful film. It has a barely present plot, some truly awful acting, and just about every police subgenre stereotype I can think of. Let's get one other thing straight, Cobra is so awful that it ends up being pretty darn good. From Cobretti's awkward attempts at hitting on Brigitte Nielsen to the musical choices that turn a gritty crime film into neon colored 1980s mainstream pop fare, Cobra is a movie that is comfortable being terrible. It all comes back to how serious the film is, and how it truly feels like no one is in on how terrible of a film they are making. Frøken Nielsen probably thought this was the dramatic turn that would bring her stardom. But it's hard to think of a movie as anything other than awful when Cobretti's sidekick is a guy who is only concerned with what candy he will be eating next. Of course, I may be finding his character unintentionally funny as I will forever remember him as Poppie from Seinfeld.

On a more serious note, there is the action and the performance of Brian Thompson. The action is okay, if a bit too rushed and over the top. The over the top aspect isn't really a negative as it kind of fits in with the motif of a film so bad it's good. The rushed nature of the action is a problem because it does lead to certain situations where time and place are lost. That's a bad thing, even in a movie that's only saving grace is how bad it manages to be. Mr. Thompson however, is a gem as the Night Slasher. He's sleazy, grimy, and completely believable as a serial killer. I kind of wish he had been in a different and better film, because the Night Slasher is a great villain and responsible for most of the atmosphere present in the film.

Cobra is one of those films that I will hold up as an example of how bad cinema can be enjoyable cinema. I had a great time with the craziness of Cobra and its unintentionally quirky lead. There may be some out there who think Cobra is an altogether terrible movie. I am not one of those people, there's no way I ever could be with this film. Cobra manages to transcend its status as a terrible film and become something else altogether. Like it's lead character, Cobra is bad, but it's bad in all the right ways.