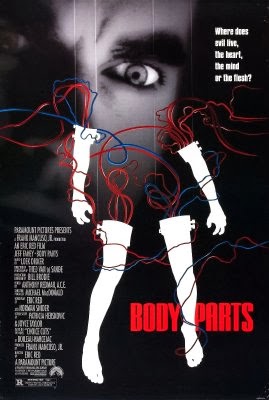 Cinematic violence is big (for our purposes here I’m talking about scope, not popularity).  Usually.  It’s supposed to be.  It’s cinematic.  Audiences love watching people slug it out, every hit telegraphed from a mile back, and every strike exploding on the soundtrack like cannon fire (which, incidentally, is what was used to create the sounds of guns firing in the classic Western Shane).  It’s not enough that someone gets shot.  They have to be all but cut in half by a fusillade of ammunition, viscera splattering thither and yon.   And often, we accept that not only do the onscreen protagonists make it through such punishment, but can then go on to kick even more ass and win the day (witness: Die Hard, Lethal Weapon, and so on, ad nauseum).  But by that same token, audiences do not generally have a personal reaction to these acts, mainly because they rarely have any basis for empathy with them.  Which is why when you see John McClane pulling a shard of glass out of the bottom of his bare foot in the aforementioned John McTiernan film, you cringe a little bit.  You probably have not been shot at and pummeled by international criminals, but it’s almost guaranteed you’ve stepped on something sharp with your bare feet.  We can watch a man be cut in twain with a samurai sword and not bat an eye, but if that same guy burns his hand on a hot pan, we react with him.  It’s this empathic bond which exemplifies, I think, the true power of cinema, its ideal potential.  So, when I see the raw stitching on Bill’s (Jeff Fahey) arm in Eric Red’s Body Parts, yeah, I wince a little.  But it also helps draw me into and tether me to a world that’s going to get pretty crazy pretty fast.

Bill is a criminal psychologist whose focus is the roots of violence in mankind.  Despite his misgivings about his purpose, he has a happy home life with his wife Karen (Kim Delaney) and his two kids.  A horrific traffic accident sends Bill to the hospital, and Karen is told by Dr. Webb (Lindsay Duncan) that Bill will lose his right arm unless they do an immediate transplant, which of course happens.  Though the recovery goes well, Bill’s life is about to take a decided downturn, since the new arm used to belong to the recently executed multiple murderer Charles Fletcher (John Walsh).

On one level, the film deals with male feelings of ineffectuality.  Bill is first confronted with this in the character of Ray (Paul Ben-Victor), a convict on death row who knows that he does bad things, but he can’t stop himself.  He pleads with Bill to “rewire” him, something both men know is a physical and medical impossibility (though the fantasy of overcoming this obstacle is part of what the film is about in this regard).  The seeds of self-doubt are planted in Bill, and when he talks to his wife about it, she consoles him and gives him a kiss.  After Bill is given Charley’s arm, things change a bit.  Where he and Karen are only shown kissing in bed pre-accident, Bill uses his new arm (the only arm he uses actively in the scene) to pleasure his wife, and after the two have what we can handily infer was phenomenal sex, their romantic relationship is magically reinvigorated.  Remo Lacey (Brad Dourif) is a painter who, until he received Charley’s other arm, could only paint quaint landscapes and “starving artist” material, fit only for bank and hotel room walls.  After, his paintings are nightmarish depictions of Charley’s murder memories and wild moneymakers for Lacey.  Mark (Peter Murnik) lost his legs and his ability to play basketball, but after the grafts, he plays (so we’re led to believe) better than he ever did before and at a nigh superhuman level.   Before their surgeries these men were mediocre, at best.  Following their replacement surgeries, each man’s life reaches new, if only transient heights.  These men need the influence of a primal, alpha male like Charley to bring out their true potential, to overcome the inadequacies bred into them and, by extension, all modern men.  That this potential has the dark side effect of awakening the more violent aspects of a person is telling.  It’s the struggle between the poet and the warrior in man without being able to find a balance.  Peace can only come once both sides have been totally conquered.

The film does posit, at least on a surface level, that the visions Bill sees and the changes in his behavior are possibly stemming from something flagitious which was always inside him.  Of course, this would also have to extend to Remo and Mark, and though that is a possibility, it strains the suspension of disbelief in the film.  Odd, isn’t it, that a viewer who has difficulty accepting that three unrelated men share a psychosis will completely swallow that the evil of a homicidal maniac lives on in his transplanted flesh?  Perhaps this is because the former is too coincidental for believability, while the latter is fantastic enough that it piques much more interest.  This relates back to the influence which the multiple cinematic variations on Maurice Renaud’s Les Mains d’Orlac (aka The Hands Of Orlac), as well as films like Oliver Stone’s The Hand, and even Doris Wishman’s The Amazing Transplant have on this film.  Naturally to rational people, the idea that a personality not only lives inside the cells of a body but can also achieve self-awareness and manipulate another one is scatterbrained.  Still, if you think about it long enough, you can throw around some fairly interesting possibilities with the topic, and so long as you entertain any of them for a at least a few moments, they do gain some sort of credibility (at least in those few moments they do).  So, you can believe in something like the transmigration of the human soul or the existence of the human soul at all.  You can ponder whether a person’s anima does, indeed, dwell within one’s mind or if the mind is an encompassment of the body in total, a gestalt made physical much like the aliens in John Carpenter’s The Thing.  See?  And when you do any of this, you have to admit that the notion of a serial killer’s transplanted limbs influencing the behavior of their recipients is not nearly as goofy as it might be at first blush.  It’s part of what makes this film work so well for me, and why I happily take the plunge once the film takes that third act turn into crazy town.  You should take the trip sometime, too.

MVT:  The screenplay is a classically smooth build up to a marvelously gonzo payoff, and each piece slots nicely into place along the way.  It does threaten to go off the rails at several points, but it never actually does (for me, at any rate).  In fact, I think it achieves a very tight balancing act.

Make Or Break:  Without giving away too much, the Make is the scene where Bill is cuffed while riding with (I love this name) Officer Sawchuck (Zakes Mokae) and taken on a super tense hellride.  It’s fantastic low budget Action filmmaking, while it also delivers surprises and moves the story into its next phase.