The Entity (aka The Barbara Hershey Ghost Rape Movie)

Last year, Martin Scorsese cited Sidney J. Furie’s The Entity as his 4th scariest film of all time on a list made for The Daily Beast. Considering this is the man who, in many ways, rescued Michael Powell's masterpiece Peeping Tom from decades of unfair criticism, I figured I could trust in the goodfella for another intriguing recommendation. 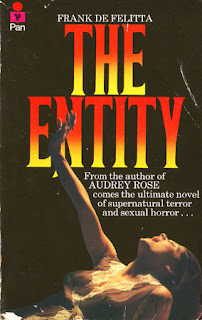 Plus, it's the Barbara Hersey ghost rape movie and it’s on Instant Watch. Why would we NOT watch this film?
Hershey plays Carla, a single mom of three working hard in secretarial school to do good by her little girls and teenage son. Life seems to finally be on track, especially since she's dating a stable, well-employed gentleman (the gravely voiced Alex Rocco) and has a sassy Southahn best friend always on call to babysit or spout adorable Southan sayings. One night, with no warning, her bedroom door slams shut and something pushes her on the bed, brutally molesting her and immediately disappearing.

Except it doesn't disappear, because it kind of never appeared.
Poor Carla is understandably terrified at being attacked by some form of Hollow Man or paranormal entity. She manages to convince herself (and screaming children) it was just a dream, but a few days later, Ghosty McRape is back, this time in the passenger seat of her car where he steers her to near death. 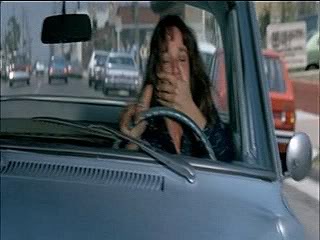 Shaken, Carla visits a psychiatrist named Dr. Sneiderman (Ron Silver) who is sympathetic  to her pain but dubious of her story. Later that night, Carla gets yet another brutal raping and shows off her bruises the next day to the still doubtful doc. He probes her past a bit and is not terribly surprised that the woman claiming to be assaulted by an invisible monster and his dwarf henchmen has had some tricky history with the other sex.
First, there was her father, a preacher by trade who never failed to look at her 'the wrong way.' At the age of 16, she ran off with a fellow teenager who knocked her up and subsequently died in a motorcycle accident. Several years later, she met an older, free-spirited fella who gave her two more rugrats before leaving forever. For the first time in her life, she's now nearly engaged to a stable, upstanding man's man that could actually take care of her.
Hence, Sneiderman's natural prognosis is that she's scared of this perfection and has instead transferred her emotional virus into a delusion, fed primarily by a hidden lust for her 15-year-old son.

There have been happier mental patients in the world.
It's right around this point that The Entity takes a turn from unsettling ghost story to psychological study, a quick stop it dwindles on before devolving into a feature length episode of Sightings. Hershey's scenes with Silver are quite good, and even though we're fairly confident to have SEEN her character's actual abuse, his psychiatric 'you've got sex troubles' diagnoses also makes perfect sense. What if she really is fabricating this elaborate spook story in a convoluted, unconscious attempt to reconcile her deeply taboo (or Taboo) sexual longings?
But in case you (or just overthinking me) forgot, this is the Barbara Hershey Ghost Rape Movie. It NEEDS to prove the logic-bound doctors and snide geeky ghostbusters she chances upon at a bookstore wrong for daring to doubt her tale. It NEEDS lightning bolts shooting out of hands and a climax that involves extra low temperature dry freezing, a la Jason X. It needs these things because for whatever reason, it's convinced those are the requirements its audience demands. 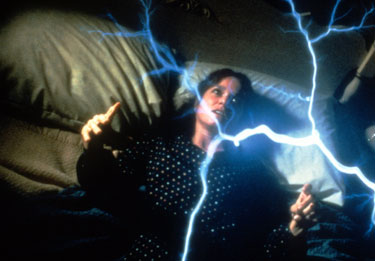 At 125 minutes, The Entity is a film that gets way too comfortable with spreading out its mood. Much like 1977's Audrey Rose (a psuedo-thriller also penned by scribe Frank deFelitta), it seems intent on both scaring and educating its audience, trying ultimately to make its viewers exit the theater firmly on the side that paranormal spirits exist in our universe (whereas the aforementioned Anthony Hopkins film tried awfully hard to prove the possibility of reincarnation). The problem is the film doesn't know where its strength lies.
Yes, this was based loosely on a true story, but at some point, writer deFelitta or director Furie should probably have stepped back, evaluated this phonebook thick screenplay and the epic film it became, and decided what kind of movie they wanted to make. Was it the unique and unsettling ghost story where a nice, weathered woman is violently attacked to intense Maximum Overdrive-like musical cues? There's something so innately wrong about being violated by something you can't even see or identify that The Entity doesn't quite get. There's a reason why so many people--women, in particular--would be traumatized to learn they had been the nightly show for a peeping tom or target of a hidden locker room camera. Learning that you were, against your will and knowledge, being watched and studied without your consent is a violation that disrupts your whole sense of safety. It's almost as if Barbara Hershey gets this, while director Furie could care less.

Similarly, there are some fascinating undertones about how Carla is passed around, both in name and body by everyone from the hospital staff to her ghost-nerd friends and ghost rapist himself. There's certainly a thoughtful film about gender roles lurking underneath The Entity, but without any discipline, the film just doesn't have the focus to investigate.
MVT
There's simply no way this film could possibly work with a lesser actress in the lead. Hershey is perfectly cast here, bringing both imperfections and sexiness to a character we need to be both sympathetic to and suspicious of. 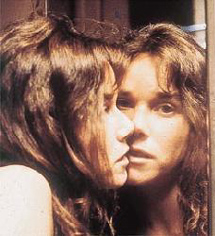 Make or Break
I'm going to cheat a tad and name a Make AND Break, because the film features both and I'm a cheater. The Make comes during Hershey's tense pseudo-breakthrough with Dr. Sneiderman, who challenges her sexuality and even makes us wonder if Carla can be trusted. Unfortunately, the film also has a big Break during its not-so-thrilling climax, as the unidentified monster gets a taste of Mr. Freeze. It's kind of meh, both in excitement and intelligence, a shame for a film that has so much else going for it.
Score: 6.75
It’s an above average film simply by oddness and the power of Hershey’s performance, but The Entity is also overlong, overplotted, and ultimately, kind of a mess. At the same time, there are some truly horrifying moments and a central evil that is insanely unsettling. So it’s an interesting mess, one certainly worth watching with a warmed up brain and dim lighting. Plus, then you can be the person at your next dinner party to proudly say “So I finally saw the Barbara Hershey Ghost Rape Movie!”

I guarantee it will get you a few phone numbers.
Posted by deadlydolls at 4:01 AM