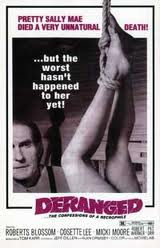 A Little Preamble...
So many moons ago, I volunteered to write for this blog.
Actually, let me take this opportunity to paint a very unflattering portrait of myself:
I sprung at the opportunity to pollute this highly respectable website with my own brand of narcissistic rambling.
In the great tradition of opportunists everywhere, I saw the chance to hitch my wagon to a really good looking horse.
(That previous sentence makes it sound like I’m really into horses in a weird Catherine the Great way.  But I digress...)
The good looking horse, in this case, was the finest of podcasts: The Gentleman’s Guide to Midnite Cinema and their equally fine blog.
Here was my chance...my moment to shine...to steal the pulpit...to lead the Gentle Minions into battle...
(To take advantage of that really good looking horse...oh,, wait, should I say that?)
After my delusions of grandeur dried up, I was left with a dismal popcorn kernel of an idea.
Because, you know, I still had to write something...
I had originally signed up to write a standard movie review and get out.
But what do I have in common with the Gentlemen?  Why do I love the show?
Well, I love trash.   I’ve found two kindred spirits in the hosts of the show.
They’ve helped me to feel sane.
That is what I have chosen to write about.
So here it comes.  My giant, deluded, and opportunistic love letter to the world of trash cinema.
(WIth much apologies to the fine people behind this blog.  You deserve so much more.) 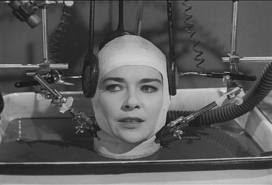 My Dog Rolls In Cowpies (A Disjointed Metaphor, but Stick With Me...)
My golden retriever named Elwood Blues has a passion for cow turds.
This makes it difficult to take the old boy for a walk without his leash.
Elwood is particularly gifted at finding the freshest cow poop and diving head first into it.
My instinct as Elwood’s master is to scream at him for indulging in this kind of behavior.
But that’s a difficult thing to do after watching Elwood make a few rolls.
The dog just seems so happy to dive bomb into something of questionable quality.
There is a certain kind of emotional solace in it for him.
Now let me close the loop on this metaphor:  Elwood’s cowpie habit is a lot like my cinematic viewing tendencies.
I’m one of those people who will pick up a shady looking DVD case and exclaim:  “This is going to be crap!  I have to see it.”
Look, I’ve been to college.  I’ve studied the great films, and can elaborate on the virtues of John Houston or Ingmar Bergman.
But every once in a while, I need to watch something that I can appreciate on a visceral level.
It might be something without any kind of redeeming value or in poor taste.  But damn it, watching it will be a good time.
Much like Elwood specializes in cow pies, I’ve learned to specialize in the world of strange, trashy, and eccentric movies.
Here’s some of my favorites (because this wouldn’t be a half cooked work of criticism if I didn’t name check some films):
Why do I love these sorts of movies?
They provide me with a type of cinematic fulfillment that is difficult to articulate.
Much like Elwood rolling in cowpies, watching this kind of stuff just makes me happy.

This fixation on trashy cinema can be a very lonely business:
It’s not exactly a passion that is easily shared.
It’s a little like being the weird, smelly fat kid in elementary school who obsessively collects bottle caps.
(You remember that kid.)
There are others out there like you, but don’t you know where to look.
One of the strange miracles of the internet age is that people are more willing to go public with their private obsessions on line.
The most die hard among us turn to podcasting and blogging as a way of sending up smoke signals.
We are trying to find camaraderie among like minded individuals.
Are we successful?
Here’s where the Gentlemen come in:
Sometime in late 2009, I was surfing Itunes for film related podcasts.
By some strange happenstance, I found the Gentlemen’s podcast.
I’m assuming you are reading this blog because you are one of the initiated.  (If you’re not, go to Itunes now and find the show!)
If you’ve never heard the show:
The Gentlemen’s Guide to Midnite Cinema is essentially a show in which two dudes talk to each other about movies over Skye.
But it’s more than that.
These are two well schooled, intellectual, and passionate men talking about the kind of movies other people wouldn’t be caught dead watching.
In fact, they actually know more about trashy cinema then I do.  And are more skilled in articulating what makes a trash masterpiece than I am.
(And to be fair, they also talk about art films and some true classics as well).
They are able to make their cinematic chatter endlessly engaging, informative, and funny.
And they have managed to find a way to seamlessly integrate their audience into the show
I listened in silence for a while.  But it wasn’t long before I started sending in e-mail and making the occasional phone call.
They were more than welcoming, eventually finding me on Facebook.  The co-host Will even sent me a list of 25 highly recommended movies to watch.
They even let me on here to stink up their site.
I mentioned that the show has made me feel sane.
Indeed, it’s refreshing to know other people like to roll in cinematic cowpies.
Posted by Dusty at 4:01 PM