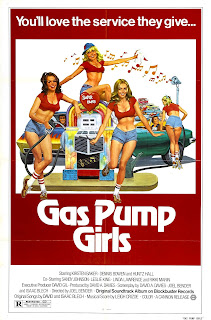 June (Kirsten Baker) and her friends at Hometown High have just graduated, and look forward to spending one last summer hanging out with each other.  But when her Uncle Joe’s (Huntz Hall) gas station is ready to go out of business from a combination of Joe’s failing health and fierce competition from the more upscale Pyramid gas station directly across the street, June connives her buddies into pitching in and bringing the dingy, old gas station back to life.  Through the miracle of erections.

Joel Bender’s Gas Pump Girls (aka The Mechanic Girls) is a fairly typical teen sex romp that plays fast and loose enough with the standards of the genre to be slightly refreshing.  The girls, with the exception of one (January, played by Rikki Marin), are distinguished from one another.  There’s Plain Jane (Leslie King), the wallflower who barely speaks at all.  There’s April (Sandy Johnson), the sexual (but eager) innocent.  There’s Betty (Linda Lawrence) the busty, high maintenance brunette who knows all about manipulating men’s lechery to satisfy her material desires.  And, of course, there’s June, the energetic go-getter with a purpose.

Their boyfriends (or boy toys, if you want), by contrast, are largely forgettable dullards who only prove Betty’s theories true (but, let’s face it, every guy in this movie does).  June’s beau Roger (Dennis Bowen) is the isolated case, as he genuinely wants to spend time with June, and is upset that he may never see her again after summer’s end.  The third group in this triangle are the local biker “gang” The Vultures, led by the Fonzarelli-lite Butch (Steve Bond).  The Vultures make Eric von Zipper’s Rat Pack look like The Satans.  They are juvenile delinquents only in the sense that they think they’re juvenile delinquents.  They don’t do much more than a little loitering, but this fits with the film’s breezy attitude.

The other way that Gas Pump Girls stands out from others of its ilk is in the portrayal of its main theme.  Primarily, this is an underdog/save the rec center plot, but instead of a bunch of teens confronting some greedy land developer, here the conflict is with the esurient gas station owner across the way, Mr. Friendly (Dave Shelley).  It’s a socioeconomic struggle between a united working class and a soulless corporation, and we know it’s essentially soulless (outside of the mere fact that it’s a corporation in a movie) because they are homogenized and gentrified, as opposed to the creative, all-inclusive workers of Joe’s Super Duper.  The Pyramid goons conform to the standards of what’s expected of a gas station in generic terms, but Joe’s Super Duper provides an individualized, exciting gas-pumping experience (there’s even an extensive double entendre about the process [“Grab it, stick it in, squeeze it, and let it peter out”]).  Joe’s Super Duper is the new blood in the local gas pumping industry.  They are the rebirth of a dead business from out of the ashes, fueled (ahem) by youthful enthusiasm.  Why more full service (ahem, again) gas stations didn’t follow this film’s business model in real life, like bikini car washes, is beyond me.

Yet, even the film’s antagonists comply with the movie’s jaunty disposition.  Friendly mocks the girls, but aside from sending useless thugs Bruno and Moiv (Joe E. Ross and Mike Mazurki, respectively, and please note the ethnic spelling of Marv, just so you get the full picture) to intimidate June, things never get too personal for the upscale station owner.  Friendly is easily thwarted, even when he ups his game and gets the gas supply cut off to Joe’s pumps.  Further than this, when the youngsters go straight to Pyramid corporate headquarters (disguised as Arabs and belly dancers, naturally), the expectation is that corporate fat cat Mr. Smin (Jack Jozefson) will be even more heartless and venal than Friendly.  However, he’s one of the biggest pushovers for a sob story ever, and the whole thing is executed so as not to get in the way of the fun.

Another aspect of the film that I found intriguing is the notion of childhood’s end.  At the high school commencement, a practical joke by The Vultures leads to our female leads baring their boobs for all the audience to see.  The girls are all technically adults now, and though embarrassed at first, they are pretty hunky dory about it in the next scene in the same sense of discovering the joys of drinking alcohol and then discovering the joys of drinking alcohol legally in a bar.  As previously stated, Roger takes the inevitable departure of June from his life pretty hard.  He goes from playful flirting to stunned contemplation, though June seems okay with it all until she gets the phone call regarding her uncle’s health which perhaps reminds June of the transitory nature of life.  That said, June also gets a little song to sing to herself while hanging out at her uncle’s closed gas station which belies her original nonchalance (curiously, the only song any character in the film sings, and it made me suspect this was actually a musical; it isn’t).  Its title is All Of My Friends, and it includes the lines, “Just gimme all of my friends, and I’ll be happy again,” “bring ‘em back home, where you know they belong,” and most importantly, “I’m lonely.”  It’s half-lament, half-retrouvaille for long held friendships that are slowly dispersing.  The kids’ entire business escapade is a final fling for them to both solidify and begin letting go of their relationships.  Even The Vultures’ sudden sense of community spirit appears to stem from their connection to these teens specifically and their realization that soon they won’t be around to prank and harass (plus, the age divide between them and active high school kids is only widening, so these may be the last high school kids with which they can partake in their particular brand of mischief without just being creepy).  The film, then, is a last hurrah for youth, as well as being a call to seize the opportunity to do something, have some fun, and maybe use your body to sell some petroleum products.  And that’s the big take away; the film is an ultra-casual ode to youth.  As a dyed in the wool nostalgist, it works in spades for me.  For as much as the film is a snapshot of the West Coast in the late Seventies (something I never tire of seeing), its message applies to youth (American and otherwise) on the whole: Grab it, stick it in, squeeze it, and let it peter out.

Make or Break:  The locker room scene, wherein the girls talk about how they feel about what happened and how they view the world.