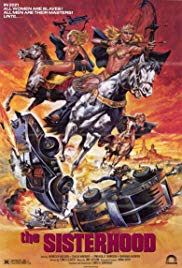 Having now seen six films from Cirio Santiago, I know what I’m in for when I hit play on one of his movies.  A paper-thin plot, wooden acting, explosions, sloppy fight choreography, shoot-outs, and female nudity.  Santiago knows how to check off all the boxes for genre filmmaking.  His films are never great but I never find them to be boring or truly awful, either.  I like to describe Cirio Santiago’s films as cinematic junk food.  They satisfy when you have a craving but they’re not going to have much long lasting value.  The Sisterhood is yet another example of Santiago’s vending of cinematic junk food and that’s OKAY!  As long as you go into his movies knowing what to expect.

The Sisterhood is a sort of mashup of the post-apocalypse and sword and sorcery sub-genres that flooded VHS rental shops back in the 80’s.   The characters’ costumes are either made up of tattered shirts and shoulder pads or capes and furs.  Most of the locations used in this film were either shot in a rock quarry or a desert location; AND the two primary modes of transportation in this post-nuclear landscape seems to be either horseback or repurposed combat vehicles.  Tropes from both sub-genres are present.  We even get some sorcery and magic powers, likely mutations brought on by nuclear fallout, and the “sisterhood” are even referred to as witches.

Santiago attempts a female empowerment angle to the proceedings, which isn’t new territory for the director.  Previous films, such as Silk and The Muthers, also showcased strong women capable of holding their own against the vicious men who act as their adversaries.  Unfortunately, Santiago’s good will and efforts towards feminism is undercut by topless shots and female characters scantily clad and dolled up with makeup.  Cosmetics are a necessity in a post-apocalyptic world?  Granted, this is a low budget genre film targeted at a specific audience and I appreciate the effort, but still, it comes off as disingenuous.  This film would actually make an interesting double with Mad Max: Fury Road as a contrast and compare exercise.

There’s little to no plot to speak of in The Sisterhood.  Basically, we follow three female characters as they travel across “the wasteland” in an effort to free their fellow sisters from slavery in a male dominated world.  As to be expected, there are plenty of battles and adventures along the way.  Obviously, this is a low budget affair.  The soundtrack, specifically, sounds like some dude banging away on a Casio keyboard in his parents basement somewhere in Ohio.  So, don’t go in expecting anything on the level of Beyond Thunderdome.  Keep your expectations mitigated and turn your brain off after you hit that play button.  A six pack of your favorite beer will likely help increase your level of enjoyment.

MVT: Cirio Santiago: He consistently does a lot with a little.
Make or Break Scene: The Sisters storm a rock quarry hideout with a tank!
Score: 6/10
Posted by Bryan Davidson at 11:26 AM