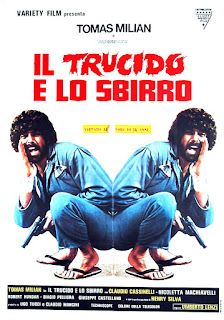 Notorious hood Brescianelli (Henry Silva) kidnaps a young girl with a kidney problem, and the eponymous tough cop, Antonio (Claudio Cassinelli), is given the titular free hand to track him down.  To that end, he busts former Brescianelli associate Sergio Marazzi (Tomas Milian), also known as Garbage Can/Monnezza, out of prison.  In turn, the duo enlists the help of three other hardened criminals, Calabrese (Biagio Pelligra), Vallelunga (Giuseppe Castellano), and Mario (Claudio Undari).  Time is running out.

Uneasy allies are nothing new in cinema, especially in the realm of Poliziotteschi.  Having them be cops and criminals is perhaps the clearest way of juxtaposing their differences and generating instant tension.  Likewise, it’s also the most expedient way of emphasizing their similarities.  Antonio is a cop in the Dirty Harry mold.  He was transferred to Sardinia because he’s so rough in performing his duties.  He’s brought back to Rome specifically for this case because he’s such a hardass.  The police can’t handle the situation playing strictly by the book.  In his first meeting with Monnezza, Antonio knocks the man out and kidnaps him.  Antonio is quick with his gun and his fists.  Procedure does not suit him.  He cajoles the trio of train robbers into helping him (he doesn’t tell them he’s a cop at first, and when he does, their commonalities make it almost a non-issue).  He allows a couple of jerks to rob a movie theater, with Vallelunga stating they’re “just kids having fun” (don’t worry, Antonio catches up to them later).  He also has no misgivings about letting Calabrese and his boys tote guns around Rome, shooting the place up and brutalizing everyone in their path.  At one point, Antonio leaves the sleazy Mario alone with a housekeeper, and the baddie is knee deep in raping her before Antonio stops him (and even this is practically accidental).  Further, he’s angrier with Mario for killing a person of interest than for attempting to rape an innocent woman.  Antonio is, in effect, the same as the crooks with whom he aligns himself.  Both sets are doing what they do, and they do it without hesitation, and what they do is basically the same (earn a living being thugs).  The only separation between guys like Antonio and worse criminals like Brescianelli is that Brescianelli is completely heartless.  Yes, all of them are willing to kill to get what they want, but only Brescianelli and his crew would stoop to endangering a child.  Everything else is fair game.

Monnezza is the outlier in the group.  He wants nothing to do with any of them, constantly complaining about the situation in which he finds himself.  Nevertheless, he’s also the hero of the piece, moreso than Antonio.  It’s Monnezza who finally finds the girl and prevents her death at Brescianelli’s hands.  Monnezza is a trickster character, a performer who lulls everyone around him into a state of ease.  His role as an actor is accentuated by his appearance or, I should say, appearances.  His hair is a massive afro, in combination with his scraggly beard, making him look like a bum.  He wears guy liner (or Milian just has incredibly dark, lush eyelashes), giving him a flamboyant air.  Monnezza also loves to appear in costume to deceive his enemies.  He dresses up like a telegram delivery boy, a priest, and a shepherd, to name just three, so he can either gain entry or information from people.  But underneath this, Monnezza is most assuredly a schemer and a man to be taken seriously.  After his brother is unsuccessfully targeted by Brescianelli, Monnezza pays a late night visit to the man who fingered him.  He plays a game with the guy, offering him two glasses of milk, one regular, one poisoned.  Yet even this is a pretense by Monnezza.  Outwardly playing the boisterous clown, he is shrewder than all the other characters in the film put together.

What I think marks Umberto Lenzi’s Free Hand for a Tough Cop (aka Il Trucido e lo Sbirro) as a superior Poliziotteschi is its self-consciousness.  People who don’t know better will think they have accidentally sat down for a Spaghetti Western, as the film opens with scenes from one (to the best of my knowledge, neither directed by Lenzi nor starring Milian, funny enough).  The film’s soundtrack even blares out a Spaghetti Western theme, and the title credits font is pure Spaghetti Western.  Only after a little over a minute of cowboys blazing hellbent for leather through Monument Valley are we shown that this is actually a film being shown to a bunch of convicts.  There is a shot of the film projector itself which holds for several seconds.  What Lenzi is saying, in other words, is that the crime story you’re about to watch is as much of a fantasy as the romantic, mythologized Old West of the cinema.  To that end, the characters and plot are generic (with the exception of Monnezza, the only one who understands that this is all a story, all bullshit, and unimportant except for his role to play in it).  By this time, audiences had seen enough Clint Eastwoods and Charles Bronsons and Maurizio Merlis to get the shoot first, ask questions later method of street justice with which this film is saturated.  This is also the reason why Silva’s Brescianelli is such a rattlesnake-mean son of a bitch.  The very act of casting Silva, having appeared in plenty of Eurocrime films by this point, is sufficient to flesh out anything and everything an audience needs to understand the character.  Free Hand for a Tough Cop is a puppet show, its genre being the stage, its characters the puppets.  But it’s Monnezza who pulls their strings, and it’s Lenzi who pulls Monnezza’s.

MVT:  The film’s self-awareness is its distinguishing factor.

Make or Break:  The full flavor of the film is captured within its opening minutes.  It is equal parts disorienting and engaging.