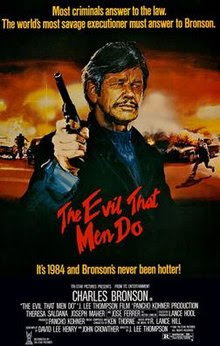 Over the span of his career, Charles Bronson worked with a variety directors on more than one project.  The director that most fans associate with Bronson would likely be Michael Winner.  After all, Winner was directing Bronson when the actor was at his peak and the two collaborated on the first three films in the iconic Death Wish series.  Together, Bronson and Winner made six films together.  There was, however, one other director that Bronson worked with more than Winner.  That director’s name is J. Lee Thompson and the duo would end up making nine movies together!  Thompson is probably best known for directing such films as Cape Fear and The Guns of Navarone, but in the 80’s Thompson and Bronson made several violent B-movies for production companies such as Cannon Films.  Both men were in the twilight of their career and resorted to low-budget exploitation to keep the checks coming in.  Some of these films turned out to be pretty entertaining pieces of trash cinema.  Films like 10 to Midnight, Kinjite: Forbidden Subjects, and the film being reviewed, The Evil That Men Do.

A sadistic expert of torture, notoriously referred to as “The Doctor”, contracts his services out to oppressive governments who want to keep their dissidents in check.  After a failed assassination attempt on The Doctor, the rebellion reach out to Holland, a retired CIA assassin, to kill The Doctor and end his cruel methods of torture.  Holland decides to go undercover and present himself as a family man so that he may get close to The Doctor and take him out before he is forced to leave Guatemala.  Along the way, Holland will have to go through various henchmen and villainous characters before he reaches his target.  Scenes of action and bloody violence transpire as Holland lay waste to this evil cast of characters.

Bronson plays Holland, the former CIA agent, who’s retired to the Cayman Islands to work on his tan and befriend stingrays he’s affectionately named Quasimodo.  Bronson’s limitations when it comes to emoting actually work to his advantage in this role.  His character is cool, calculating, and has no reservations about murder if the end justifies the means.  This is the kind of role that fans of the actor have come to expect when they go into a Bronson film.  There are plenty of scenes in The Evil That Men Do where Bronson gets to show off what a badass he is.  We get to see him toss a guy off the balcony of a high-rise apartment, throw a knife through a man’s neck, and the highlight of the film: squeeze a sexual predator’s testicles until the attacker passes out!  There are some half-assed attempts to make Holland appear to be a man with morals and a belief in the rebel’s cause by having him do the job for free, but mostly he’s just shown murdering people with extreme prejudice.

Much like 10 to Midnight the year prior, J. Lee Thompson brings the violence and sleaze to his direction of The Evil That Men Do.  Right from the opening, Thompson treats the audience to a torture scene involving electrodes applied to a man’s nipples and testicles.   The scene ends with the grisly death of the man and this opening will set the tone for the rest of the film.  I’ve already referenced some of the scenes of violence that can be found in this film but it wouldn’t be a Bronson / Thompson collaboration without some sleazy moments in between.  After all, Thompson is the man who was able to convince Charles Bronson to not once but twice act in a scene where he holds a sex toy while he delivers some dialogue.  I guess Chuck really needed the cash at this point in his career.  In The Evil That Men Do we get a scene where Bronson convinces a goon to join him and the woman posing as his wife in a threesome back at their hotel so he may set a trap for the unknowing victim.  Another scene has Bronson hiding underneath a bed, waiting to strike while two lesbians have sex above him!  Thompson’s collaborations with Bronson may not have reached the depths of Michael Winner’s Death Wish films in terms of depravity, but he certainly gave Winner a run for his money.

It may be predictable, but The Evil That Men Do provides exactly what most fans of Charles Bronson want from these type of films.  Bronson is really nothing more than an instrument of death who massacres one despicable baddie after another until there are none left.  If his victims were camp counselors he might be mistaken for Jason Vorhees!  Because the villains of the film are so awful, we take joy and excitement from their gruesome death scenes.   I do feel that it was a bit of a misstep in not making Bronson’s character more vulnerable.  His seemingly indestructible presence doesn’t allow for any suspense or tension to occur.  There was a missed opportunity to have The Doctor capture Bronson and put him through one of his torture sessions only to have Bronson amazingly survive the torture and escape.  I guess by this point ol’ Charlie Bronson couldn’t be bothered to break a sweat in one of his latter-day films.

MVT: Bronson and Thompson both deliver but they’ve had better efforts.  The cast of villains are the type of deplorable characters you want to see get their just deserts.  Therefore, they collectively get my Most Valuable Thing.

Make or Break Scene: The moment when Bronson grabs a handful of an attacker’s genitals and squeezes until the man passes out.