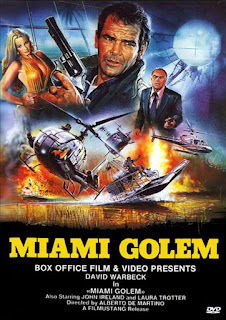 Golem - “An artificial human being in Hebrew folklore endowed with life.” - Merriam Webster.

“Your face. It's all banged up. We should stop at a hospital.” - Joanna Fitzgerald.

A television reporter finds himself drawn into a plot to steal an incredible scientific discovery. A ditzy secretary has had enough of the Man's crap.

Alberto De Martino (1929-2015) had been writing and directing films since the early 1960s (Will anyone claim this veteran as a personal favorite?) It appears Miami Golem was his very last directing credit, topping off two and a half decades of solid work. Among his credits are westerns and comedies and western-comedies and peplums too. Holocaust 2000 (1977) was not Kirk Douglas' proudest Hollywood hour. De Martino directed the Neil Connery vehicle Operation Kid Brother too. Miami Golem comes subsequent to the particularly infamous Puma Man (but let's forget it was mentioned) Star David Warbeck is here only a few years removed from having crossed over to The Beyond. Laura Trotter was one of the residents of Nightmare City. John Ireland had been in films since the mid 1940s. Miami Golem belongs to that trend of Florida-set Italian films of the period, including American Rickshaw, Cruel Jaws, Miami Supercops, Cut & Run; itself a subset of the group of Italian films set in diverse American locations.

We love Italian films because the filmmakers understand the necessity of zipping along; in other words, keep exposition minimal, and, as quickly as possible, find the most interesting and exploitative element of the story. Stay on target! Deploy your nudity strategically when the plot begins to sag in the second act. Helicopters and explosions are super cinema value! Splatter the orange stuff around as much as possible. Over here in America, Roger Corman had a similar model; even his PG movies keep it going with the Ramones or the occasional car action. True to fashion, we can say that Miami Golem keeps it moving and does not overstay its welcome. Something new happens every ten minutes. This is not a film laboring under the illusion that it's an 'important' treatise. Unfortunately, there's no visual flare here, no Spontaneous Spider Attack, no raison d'etre for anything really, and so it's harder to overlook the illogical progression of this particular sequence of events. The love interest is a total blank – Nice Body, Unfortunate Hair. You would think any story involving other worlds would tend to raise the dramatic stakes. Alas, it's just another sunny day in Miami. Don Dohler did more for the promotion of aliens out in the hinterlands. Here, alas, there's no money in the budget for an amazing technicolor saucer. Warbeck's character is pushed along through action and exposition; as for motivation, the viewer is left to infer that, maybe, he's in it for the excitement of the news game. He's a near zero on characterization. The basic frame of the movie is a Hitchcockian plot of a man finding himself in over his head, albeit with splashings of Ghostbusters, Close Encounters. It's not as much fun as it sounds. A fan boat chase precedes Miami Vice. There was one in Invasion, U.S.A. too. This is not one of those Italian films from the later 80s fortunate to have been shot with live sound; the whole thing bogs down under its canned audio. That's a cool poster. It should be tattooed on the moviegoer's neck: “The woman on the poster is not in the movie.” There's a strobing climax right out of Alien. The thing is in the jar like The Jar. People are tossed around like The Exorcist.

An alternate title is Miami Horror. Times are strange when American Rickshaw has a fancy special edition bluray (but then Martino surely gets more respect than De Martino.) Can Miami Golem stay forever a stepchild in the cold? Like an avid beachcomber without his matching carcinogenic tan? In the meantime, while we wait, the curious can find the film on Youtube in awful quality with Turkish subtitles or slightly better quality with Japanese subtitles.