Directed by: Drew Goddard
Written by: Drew Goodard & Joss Whedon
Starring: Chris Hemsworth, Richard Jenkins & Bradley Whitford
The Cabin in the Woods is like every other horror you've seen. It could, in fact, be every horror movie you've seen.
If that sentiment doesn't make sense to those who have yet to see the film, I advise not trying to make much sense of it until after a viewing (and stay away from the new spoilery trailers while you're at it). Admittedly, it's hard to write anything of substance without spoiling a few items. The surface plot description sounds like a million horror movies. A group of reckless, fun-loving college kids go on a little cabin getaway deep in the woods. You know these kids, there's the hot party girl, Jules (Anna Hutchinson), her muscled beau, Curt (Chris Hemsworth), their good-girl best friend, Dana (Kristen Connolly) and the good guy, Holden (Jesse Williams), they set her up with for a weekend tryst. Oh, and certainly, there's a stoner tagalong, Marty (Fran Kranz), who wields one of the greatest bongs in cinema history. Of course, cue the scary trailer voice over guy to inform us that this is no ordinary cabin in the woods. A night of drinking, drugs, sex and hijinx leads to the dark and haunted truths about their kickback spot. It seems like so many other horror films, both in description and title, I know. The cabin these kids stay in is even identical to the one from The Evil Dead movies. And yes, that's all by design. And while it's easy to succumb to the familiarity, what unfurls is something much different from standard horror fare.
Without giving away too much, let's say that The Cabin in the Woods has much bigger things in store, both narratively and entertainingly, than the shallow high concept indicates. The big twist is overly apparent from the opening, if not outright then with enough heavy leanings that you'll put the pieces together rather quickly. Even if the biggest twist is blown for you, I still highly recommend checking this out in a theater with a live crowd because it's an immensely good time. For those horror fans who prefer their terror pics straight-laced, fair warning, a large part of the entertainment value derives from the comedy. I wouldn't say The Cabin in the Woods is trying be a comedy foremost. The humor predominantly stems from the lovingly satirical elbowing of this genre, which plays with conventions and sensationalizes established beats to fine comedic effect.
To some degree, the sense of humor is akin to Scream (and I realize that's something of a dirty word, though I've professed my love of the film on this very blog before) without the albatross of the main characters omnipotent horror movie knowledge, and thereby preserving the perilousness of their circumstances. There are two halves to the film, and in this other half, those characters are assuredly aware of the "horror movie" unfolding. However, where this approach differs, and thus maximizes the entertainment factor, is that we as viewers are right alongside these characters, both laughing at the obviousness of what's to transpire and enjoying all the supernatural and survivalist elements that comprise the best parts of the genre.
And while this angle is played for laughs, director/writer Drew Goddard and producer/co-writer Joss Whedon bring the carnage and some genuine scares. In the early-going, the terror comes by way of the undead redneck zombie family that our party kids unknowingly summon from the grave. Initially, these slashers seem a bit generic, but they're utilized quite well to a jarring effect through various stalk scenes and chain-wiedling action, especially when they first strike. As the film unfolds, these killers are honestly just the tip of the iceberg as we're introduced to a cadre of villains, slashers, monsters and madmen that widens the scope of the picture. Whedon described The Cabin in the Woods as one of his first film projects where he just completely threw himself into the story without any concerns toward budget, salability or studio backing, and it honestly shows. This really is an unbridled horror fanatic throwing everything up there including the kitchen sink. 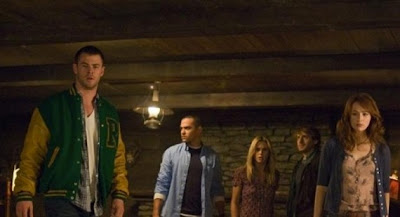 The real highlight of the cast is easily the pairing of Richard Jenkins and Bradley Whitford as Sitterson and Hadley respectively. Playing something of an irreverent office cubicle duo, they throw themselves headlong into their roles, charisma set on overload and pushing the hilarity throughout. Like us, they seem a bit weary of their job (and doing the same old thing, or watching the same old horror movie things) and strive to find ways to entertain themselves whether that's through orchestrating office pools, pulling workroom pranks, injecting some levity into unfunny predicaments or overacting to blow off a little steam. Personally, I love watching Richard Jenkins contract a serious case of red ass. It's a great time whenever Sitterson blows his stack over something not going his way with a surly attitude and salty language; there's a machine gun barrage of F-bombs fired off that especially had me cracking up. It's not a shocker that an esteemed actor like Jenkins would steal the show, but it is a little more of a surprise to see Bradley Whitford shine this brightly. Obviously, Whitford is known for his television resume, of which I've seen little, but I've never seen him in this type of role or in this style of film -- and he excels at it, exuding plenty of charm and comedic chops. Whitford instills Hadley with more of a sardonic "who cares" humor that strongly compliments Jenkins' firecracker performance. As for others in the cast, it may interest you to check out the Son of Asgard himself pre-Thor Chris Hemsworth playing brawny jock-type, Curt.

Make or Break - You might want to skip this paragraph as I'll need to reference a pivotal scene. The make scene of the film occurs when Marty and Dana stumble upon the massive holding cell of creatures far beneath the campsite. The whirling prison cell and monsters contained within them is a great surprise, and this scene ratchets up the anticipation to see more of this subterranean facility. It's the type of scene the demands repeat viewings to catch everything, and one that will most likely reward you upon revisitation.
MVT - Drew Goddard and Joss Whedon, the screenwriters. Not that Goddard's direction isn't integral, but the story and concept star here. There's a lot packed into the narrative in terms of story design, genres and characters, and they all congeal so admirably that the writing needs acknowledgement.
Score - 8.5/10
And after you've seen this, it occurred to me that the short film Cost of Living would make a fine little double feature as the first salvo of a one-two late night punch.
Posted by They Call Him Chad at 12:02 AM